Over the years Pitchfork Music Festival has provided a consistent blend of indie rock and hip-hop artists making it a mainstay music festival in Chicago. It does a great job of being a proving ground for artists to launch their careers. To this day the festival continues that tradition by showcasing acts across various genres and mixed levels of popularity. Attendees came out in droves to listen to some great music but the weekend itself battled hazardous weather conditions for all.

Without a doubt, the first day was the harshest to endure. There were a few moments of peace, but the majority of the day was nonstop rain, but fans embraced the flurry standing out in the open field to support Chicago native Kaina, who came out on stage to thunderous applause. Kaina returned the dedication by singing songs off her latest album It Was A Home, songs like “Apple” made people dance with its groovy retro style while other songs like “Anybody Can Be in Love”, truly showcased her heavenly voice. Parquet Courts took the stage next. It felt like déjà vu of 2019 when the band played the very same stage at Pitchfork during a thunderstorm, which lead to organizers evacuating the grounds for a few hours for everyone’s safety. At that time I wrote that their rock instrumentation riled up the crowd as if “challenging the gods themselves”, so naturally I was worried that this was going to become a rematch. The storm was still bad but fortunately, no thunder came so we continued to get soaked while watching the set. They play songs like “Freebird II”, but all with a jazzier feel this time. That seemed to please the winds as the rain eased to a halt allowing people could dry off.

You know that old saying “save the best for last?” Well, that was certainly the truth with the final day lineup. The first day was a wash (literally!), but the last day of the festival had more of a hip-hop feel with some solid artists like NoName, Earl Sweatshirt, and The Roots. They too had to deal with the woes of technical issues due to the stormy weather.

Local rapper Noname stepped out on stage adorned in a beautiful spotted blouse spreading positive energy with her infectious smile, the crowd greeted her by cheering loudly. She wasted no time performing “Song 32” – ‘Gave my body to Adam, he told me to lie for him. Apple wasn’t the apple, the truest sin was the pussy’. She tried to get the crowd to sing along with the chorus, but sadly it was hard to hear her pass the photo pit. The crowd chanted demanding the tech personnel to “fix the mic,” which confused Noname mid-track, the sound engineer obliged the crowd applauded. “Can you hear me now?” Noname asked, and fans cheered in collective testament. She rewarded them, with “Diddy Bop” to keep the mood going. 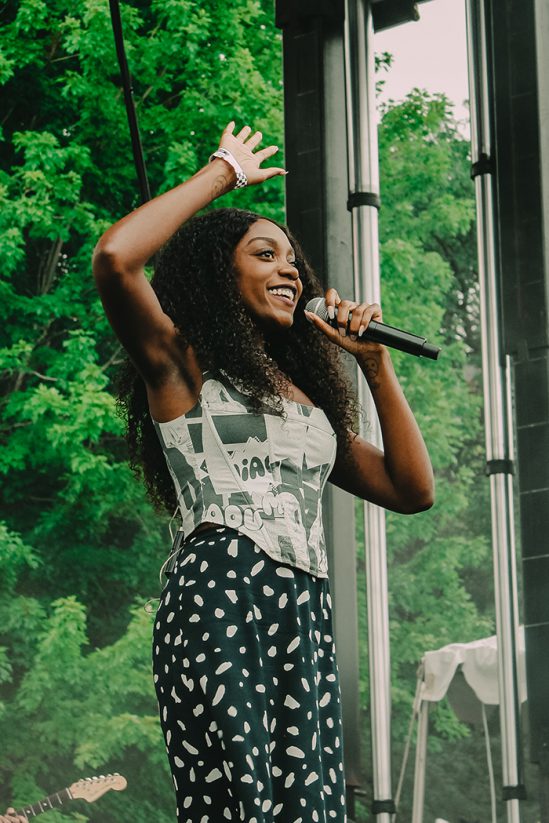 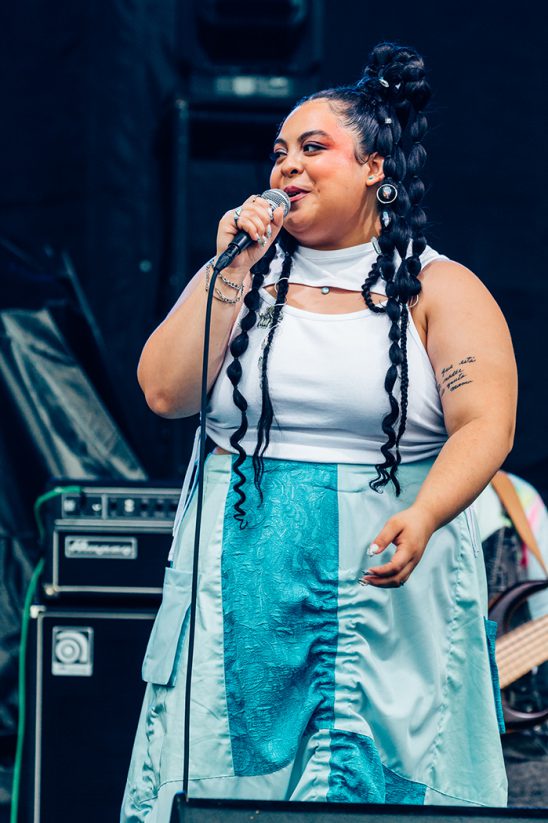 Once Noname wrapped up we all migrated to the opposite stage for Earl Sweatshirt. As the soggy theme continued his set was delayed for several minutes but soon enough it was safe to come out from hiding under trees so we dragged our feet through mud and gathered in the humid air. Earl’s DJ got people moving right away warming up the crowd with “Rain”, a song from Kanye West’s gospel album Sunday Service. It was the perfect song to play after everything we’ve endured. When Earl finally came out on stage fans were excited but were so beat from being wet most of the day it was hard to muster up much interaction. Earl caught onto this quickly, “What’s up with ya’ll Chicago? I know I don’t have many songs for crowd participation but damn”, he noted.

Similar to 2019, Earl made funny comments to an exhausted crowd in Pitchfork inspiring laughs. This time around the energy was different Earl used a more monotone voice chatting with the deflated fans, “Okay that was one song. Now I’m going to do another song” or “Did ya’ll open up the pit to mosh, or is that just mud?” It felt like Earl was simply going through the motions at times rapping “Earl” and “Top Off.” He doesn’t have many hype tracks so his laid-back vibes made it hard for the audience to rev up their energy levels. 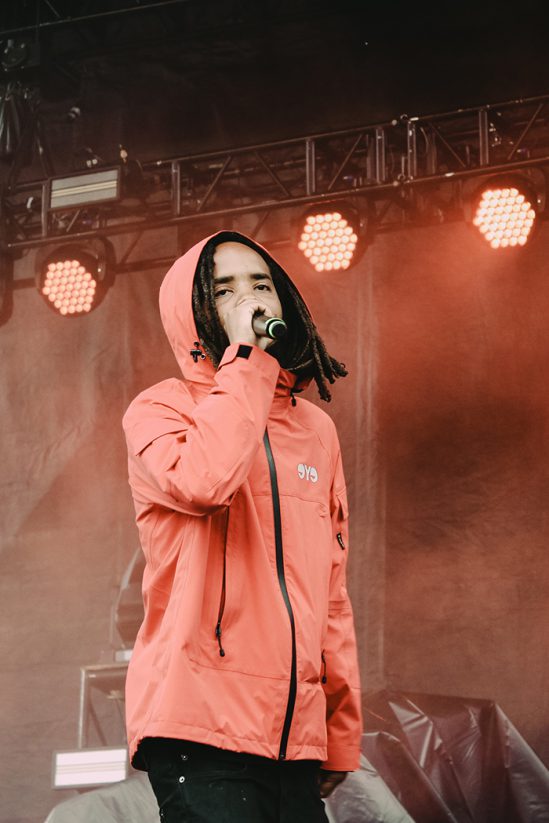 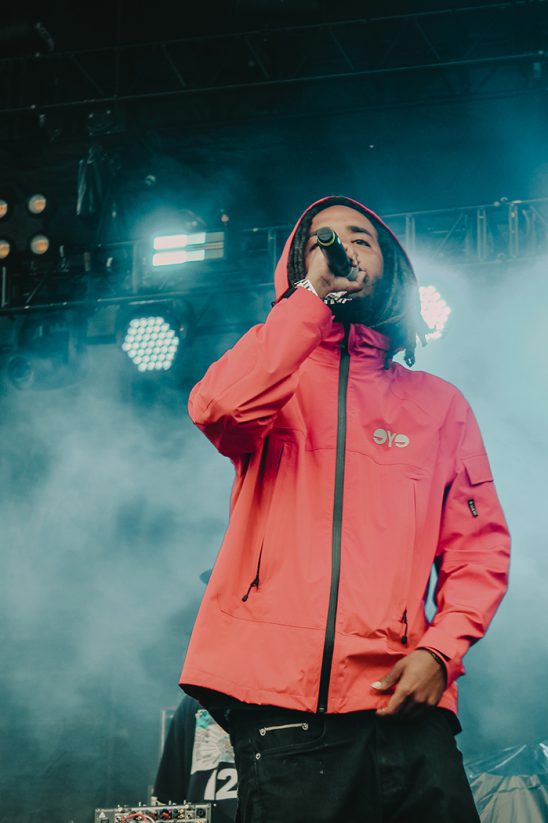 Luckily, The Roots were there to save the day. The legendary band was whom most people stayed to see. Blackthought and Questlove are the most recognizable member of the band but like a sure orchestra, it takes an entire team to make the performance outstanding. The Roots lived up to the name by performing a plethora of funky renditions of old-school songs like Kool & TheGang’s “Jungle Boogie” to throwbacks from their own catalog like The Next Movement. Blackthought is a verbal assassin and easily one of the highlights of the entire festival. Performing songs such as “Magnificent” proved that pure hip-hop lyricism still exists when in the hands of a wordsmith. People may have been too tired to dance, but The Roots is such a vibrant force that you couldn’t help but move at least a little. The combination of talented musicians to form this collective was the right way to close out the show. Overall Pitchfork was a mixed bag but a lot can be attributed to the unfortunate weather conditions. The festival is a staple in the Chicago music scene because it prides itself on bringing together artists from all genres and stature. On top of the bleak weather, artists seemed to struggle with technical difficulties or were tired themselves which made the sets feel a bit flat at times. Regardless of all that, however, fans made the best of the situation and enjoyed the event to the fullest.