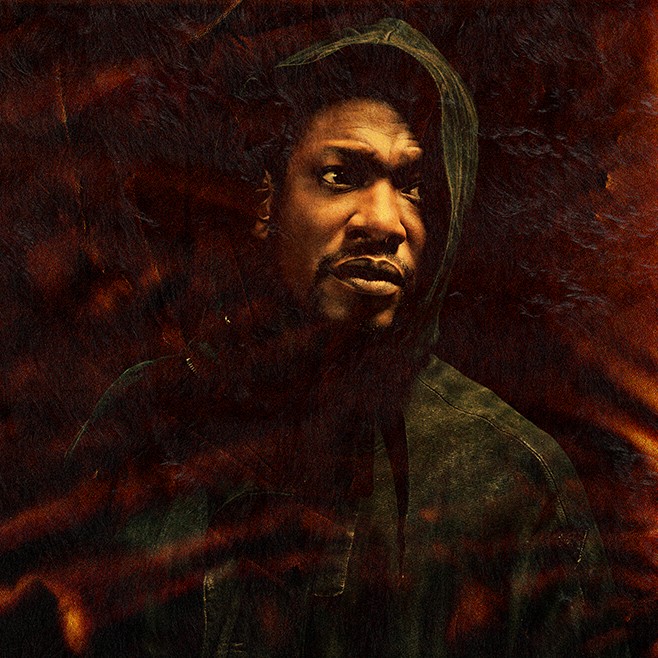 What strikes me about London rapper Roots Manuva‘s (aka Rodney Smith) 9th album, Bleeds, is how well it all fits together. Each song is in the right place, and offers a distinct sound, but they’re all held together with a single tonal pallet – which lends a sense of beginning, middle, and end, even without an imposed narrative arc.

Produced in collaboration with Fred (a newcomer on the British scene), Four Tet, Adrian Sherwood and With You (a new team founded by Switch), Bleeds makes use of an intense soundscape that draws heavily on strings, piano, and voices in the mid and high registers, along with drums and synths in the lower frequencies. Smith said of this album “limitation of language is the reason I feel the bleed of emotions and timbral motifs is the most essential part of the process,” and that’s reflected in the work that’s gone into each track.

Still, I can’t ignore the forefront of this music: Smith has been writing consistently strong verses for two decades, and on Bleeds it’s made obvious he’s not going to let up. The subject matter bends toward the personal, even when politics are at play (such as in “Hard Bastards”’ examination of the psychology of power), and the delivery is rich and musical as hell. Spirituality runs as a theme throughout the whole album, as well as an undercurrent of paranoia (made most clearly visible in “Crying”).

The only major misstep is the placement of “Stepping Hard” and “Me Up!” right next to each other. Both songs play at similar speeds in the same key, and after so much variation it causes the album to lag momentarily before changing paces again for “One Thing.”

Album highlights: “Hard Bastards” is a great opener. The strings in the first bars are so beautiful, but when Smith comes in his delivery can easily rival the lushness of the production. “Crying” shows off this album’s paranoid streak, and its samples of babies crying turns the sentiment into a visceral experience. “Don’t Breathe Out” is probably the closest to pop that this album strays, but blending the conviction of the verses with a cheery string sample adds up to a delicious groove.