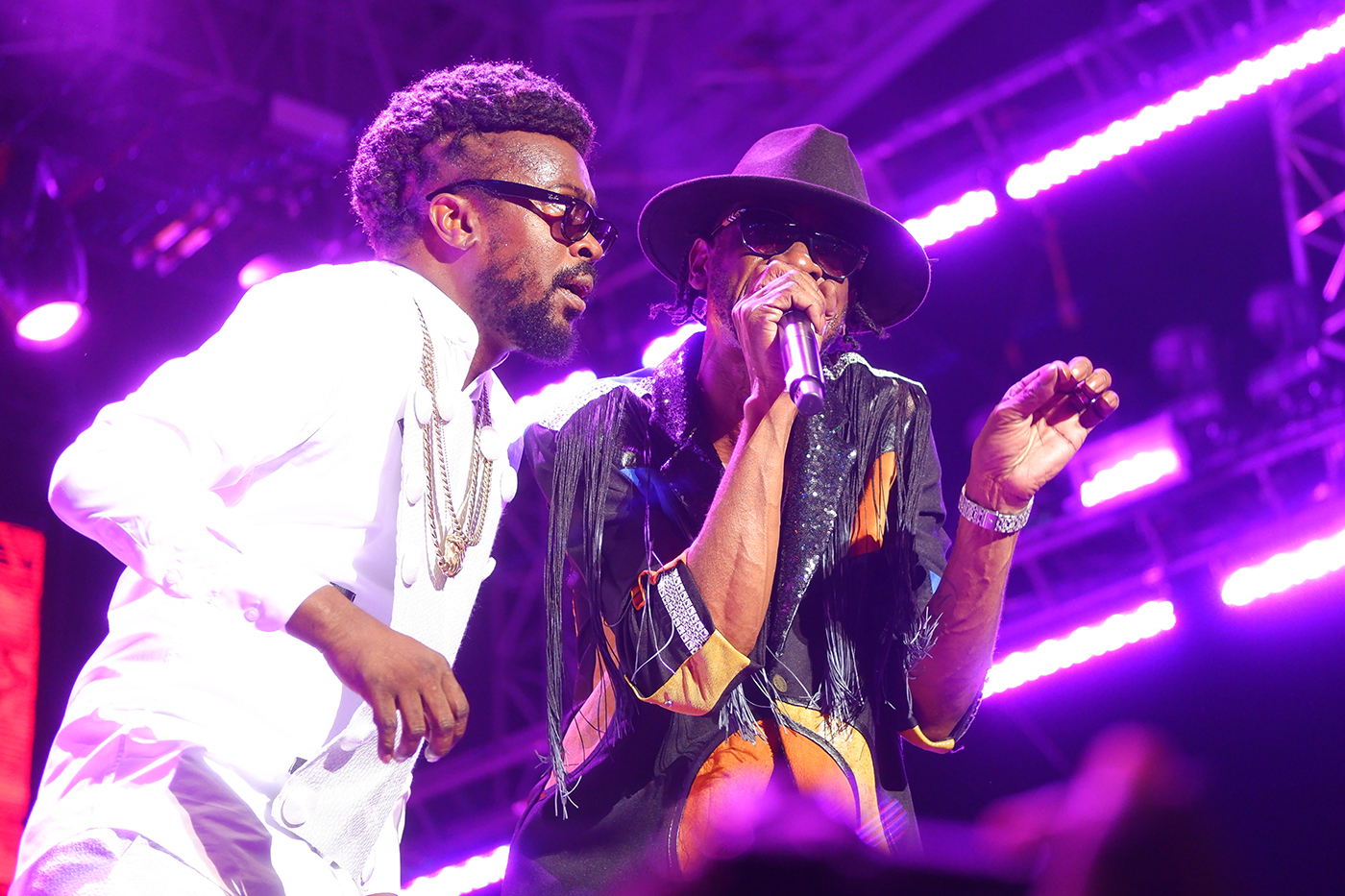 One of the biggest Reggae music festivals in the world, Reggae Sumfest, takes place over a week full of events in Montego Bay, Jamaica.  The first evening for most of us arriving mid-week was Bunji Garlin’s Birthday Celebration, Bunji in attendance, cake and all. The following evening Global Sound Clash came through fast and furious with bangs and horns. But the main celebrations for the week are two nights of full festival showcases featuring world’s best established and up-and-coming reggae and dancehall talent.

At this time of year all roads lead to Catherine Hall, the traffic is ridiculous and people spend on average over an hour inching into the festival grounds. But once you enter, the love that vibrates throughout the park is unmatched. After all, this is the land of one love and the home of reggae.

The festival grounds have a pocket kind of set up: stage at the top, trimmed by a VIP area, party crowd in the middle, various vendors and sponsor booths wrapping it around the edges. Getting from one side to the other is a mission so most people find a comfortable spot and post up there for a few hours. From the back of the park, sitting on the Island Strains balcony the view is astonishing: thousands of people, tightly packed, spread out as far as the eye can see.

The lineup was a treat in many ways. Many performers bring out up-and-coming talent to give them a chance at the stardom. This year the biggest surprise was from Romain Virgo, but more on that later. 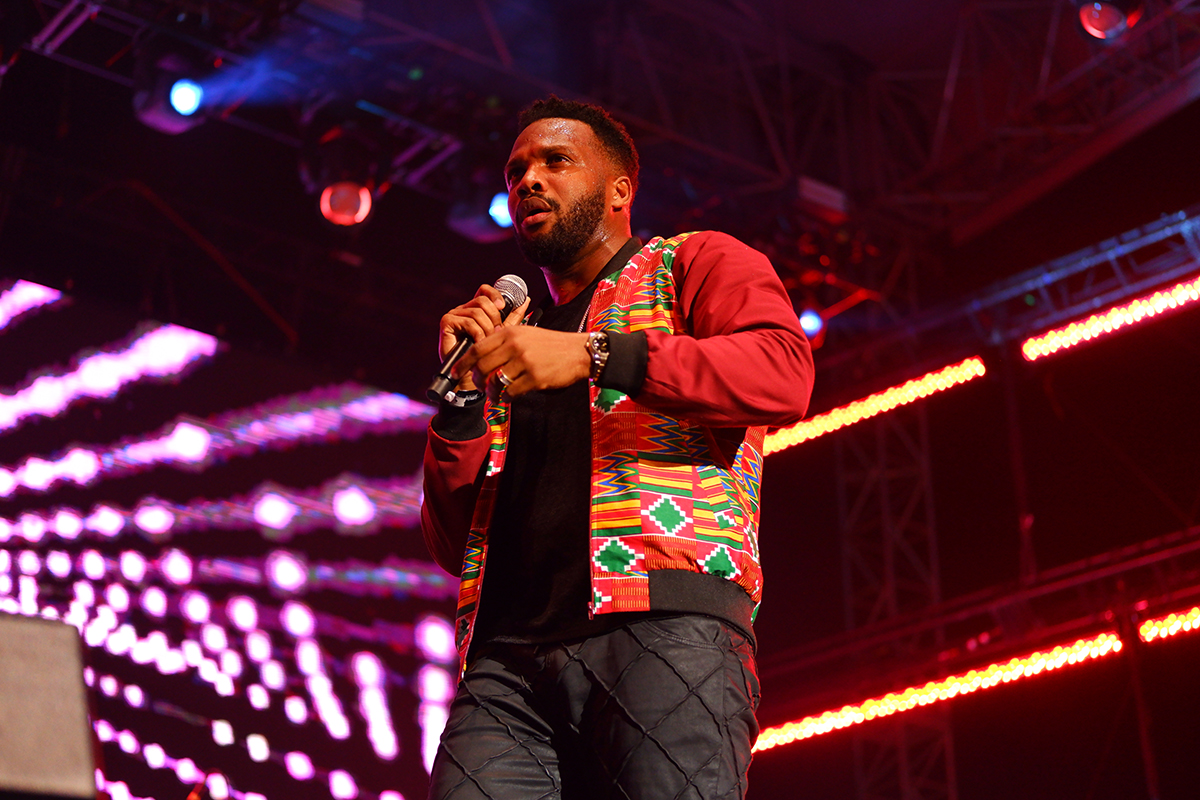 The first standout set on Saturday night was Agent Sasco, a.k.a. Assassin. Over his 18 odd years of music making Sasco has built a loyal following of fans in Jamaica. Here, people truly know him for who he is and not just as a collaborator of Kanye West and Kendrick Lamar. As one of the most recognizable and respected voices in dancehall today, with two strong albums released within the last 3 years (Hope River and Theory of Reggaetivity) Assassin gathered quite a crowd. Throughout his set Sasco was dancing, covering his face to match the dramatic notes of the lyrics, telling stories, and inviting the audience to participate. Backed up by two singers and a five-piece band, picking out tracks from across his repertoire, Sasko illustrated his full musical diversity. As a true gentleman he naturally sang “Slow down” as that one special track for the ladies.

One of the most anticipated sets for the weekend was a collaboration between Beenie Man and Bounty Killer. The two dancehall legends have been on competing paths since their first clash in 1993. Over the years this rivalry in “some cases saw a polarization of the dancehall,” pointed out Urban Islandz. But with a few social media announcements pre-Sumfest the excitement for this reunion caused quite a stir. The two artists came together on the Sumfest Stage for a joined performance and it was one for the books. Beenie Man and Bounty Killer went back and forth, riffing off of each other, giving one another room to highlight their own songs, and even brought out Aisha Davis on stage to do a few pop covers together. The two legends, in applause-worthy stage attire, accompanied by Aisha in her bright pink catsuit, made people sing, laugh, and take a trip down a memory lane. After a bit of No Doubt and a few lines of “I’m drinking Rum & Red Bull” Beenie Man mischievously, and quite literally, ran Bounty Killer off stage. 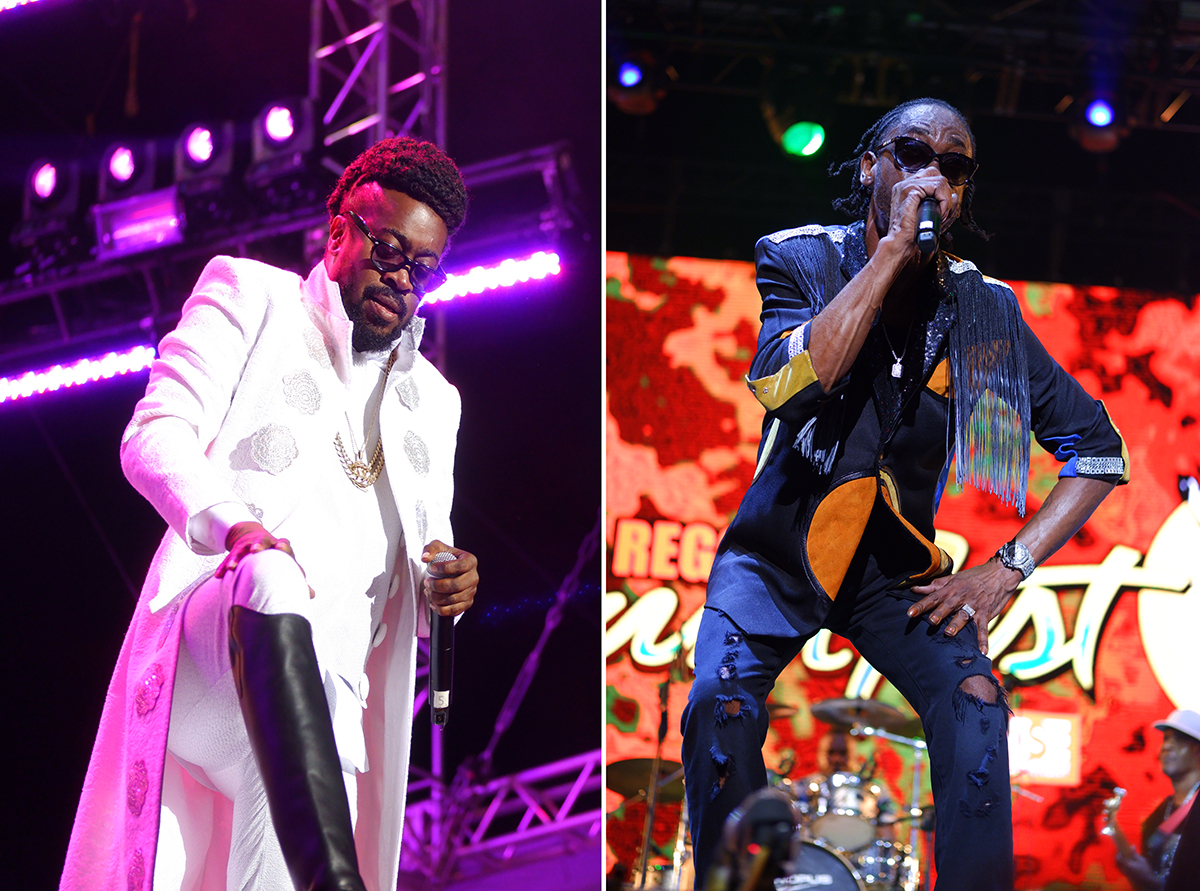 Mikayla Simpson, better known as Koffee, was a late but welcome addition to the festival lineup. Born in Spanish Town, just outside of Kingston, Jamaica, Koffee is a product of a single-parent household on a mission to “genuinely make the world a better place.” Over the last couple or years, since a school talent show, Mikayla caught a lot of attention from the likes of Coco Tea, Protoje, and Chronixx, who all brought her out on stage on various occasions. Her first original track  “Burning,” “Raggamuffin”, and “Toast” skyrocketed Koffee to the high tops of the music industry and even to the Jimmy Kimmel Live! stage. Miss Kitty, a local celebrity radio talk show host and emcee, introduced Koffee as a “young woman no one thought would gain such heights”. Small but mighty, packed with rhythm and vocal power Koffee stormed the Sumfest stage like a tornado. Mikayla quickly paced left to right as she worked her way through Rapture EP, backed by two singers in matching outfits. As she ran out of songs Koffee promptly left the stage while we were all left wishing for more. 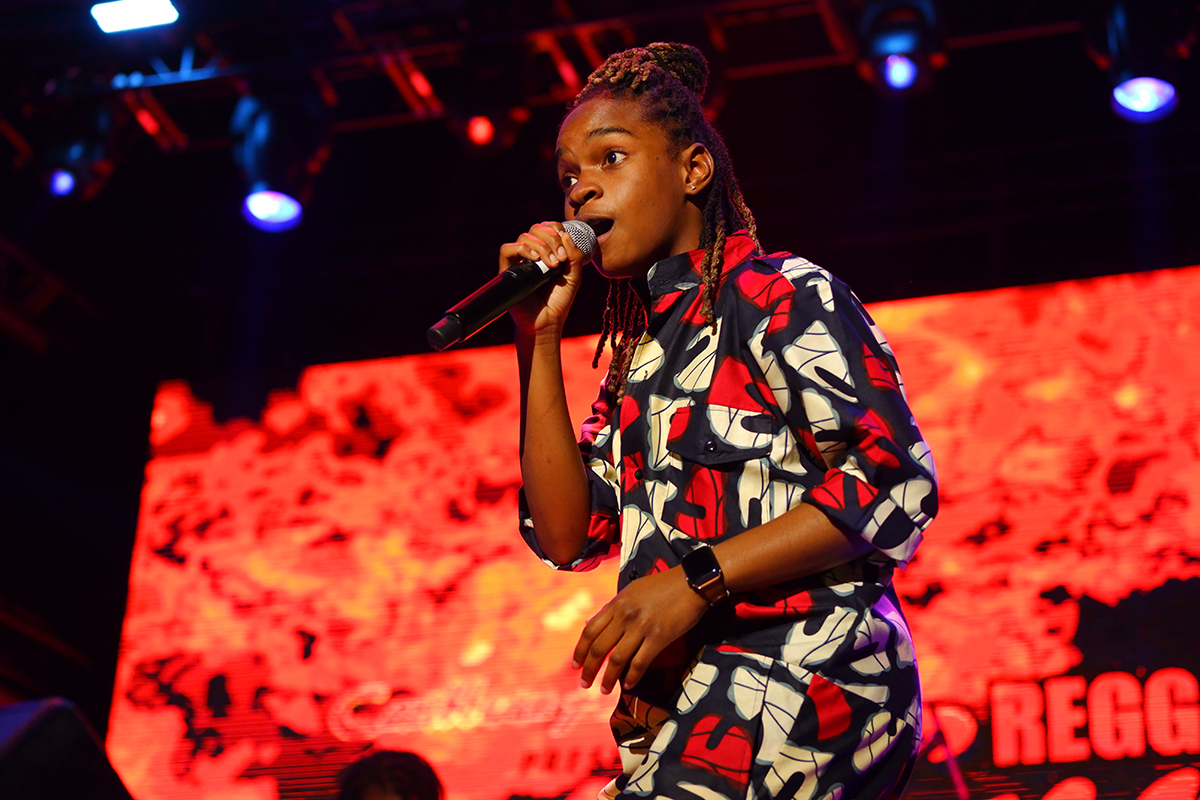 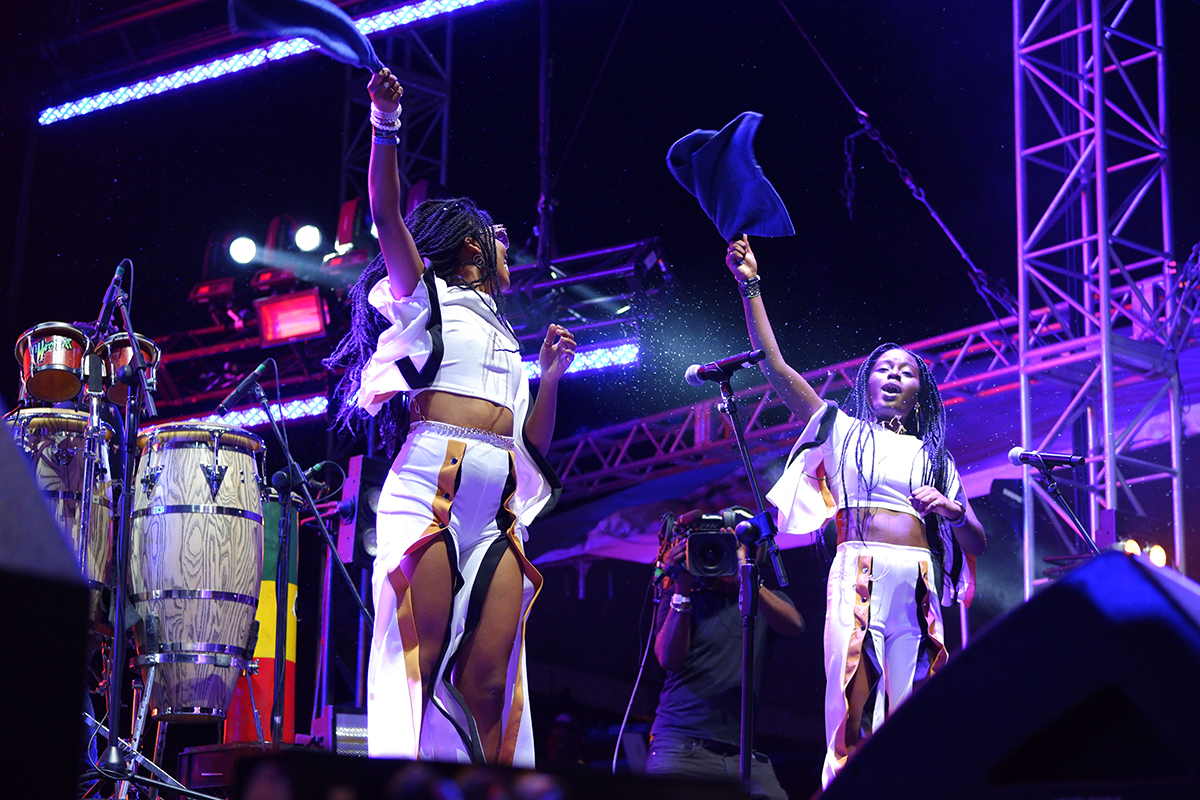 But the show must go on. The stage crew was hard at work swapping equipment while Miss Kitty laboriously worked on entertaining the crowd during the delay. The sun was starting to show and the anticipation was beginning to heat up the crowd who were anxiously waiting for Chronixx. The band entered the stage beginning to play the first notes of “Jah is there”. Chronixx, nowhere to be seen begun to sing the song. A group of people with videocameras were gathered on the side of the stage as Chronixx continued to sing a good third of the song in the shadow of the backstage. As he slowly entered the stage the crowd went wild. “This is rasta music,” Chronixx declared. Born Jamar McNaughton in Spanish Town Chronixx is an ambassador for the reggae genre, rasta culture, and had a big influence on the reggae revival over the few recent years. During “Spanish Town rockin’ ” – which everyone was singing along to – the video in the background showed the simple life in the neighbourhood, innocent and welcoming, a great segue into the rest of his set. In the meanwhile, the crowd in the photo/VIP pit redirected their attention to Koffee who made her way out to the front of the stage to watch her idol perform. Over the next hour Jamar, subtly and in relaxed attitude, played a variety of song from Dread & Terrible and the newer album Chronology. A few of the tracks naturally involved special guests: his father Chronicle for “Big bad sound” and his “brother from Nigeria” Mr Eazi for “She loves me”.

Surveying the crowd it was obvious Chronixx has changed a bit over the years. His performance was a little bit more controlled and subdued but the passion and emotion was all there, so much so, there was enough of it to go around for everyone in the park. And this was just night one! The following night, into another sunrise, we saw performances by Beres Hammond, Jah9, Christoper Martin, Proteje, Romain Virgo, and of course, Buju Banton. Checkout our Saturday night post for more. 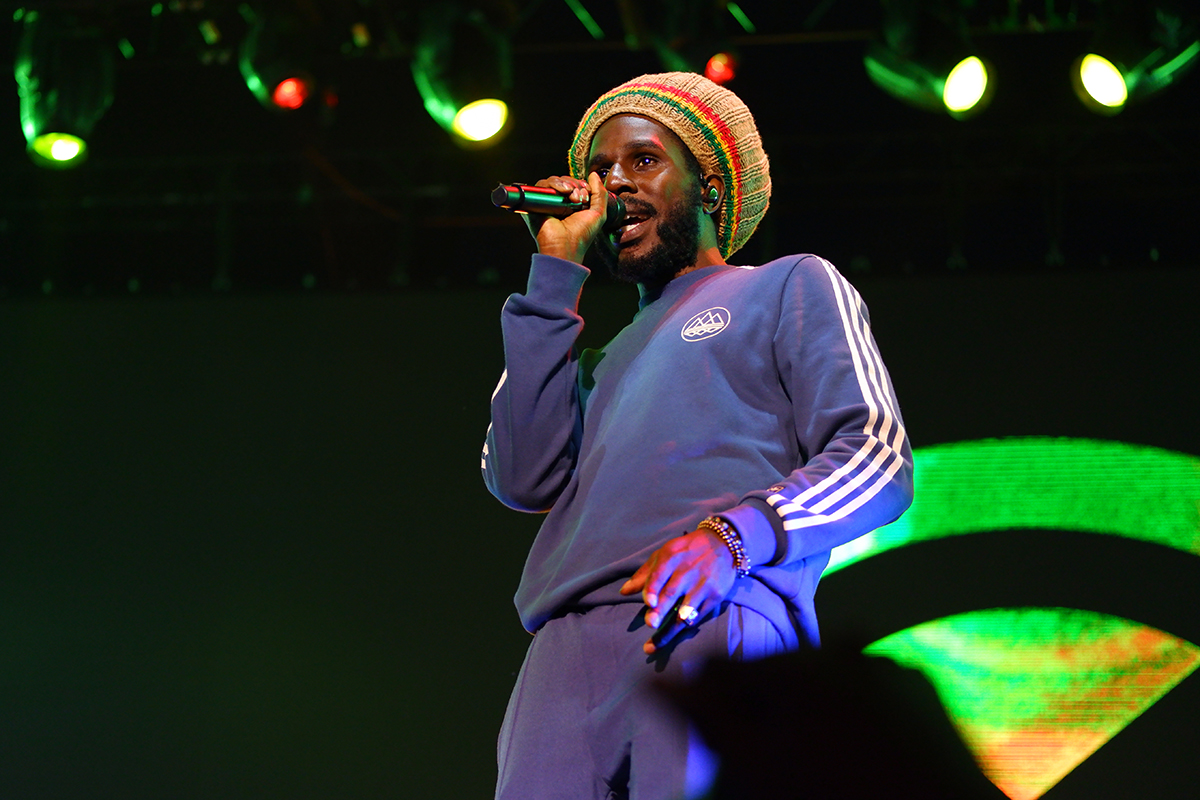 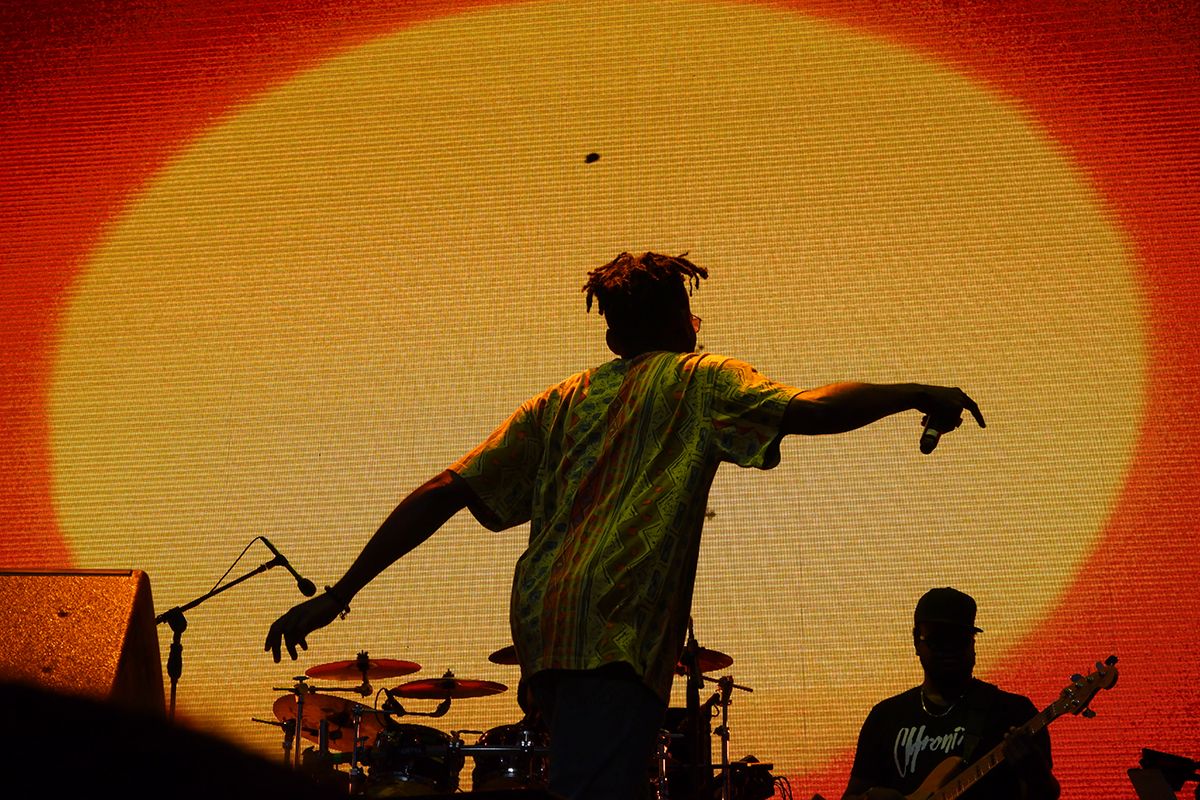 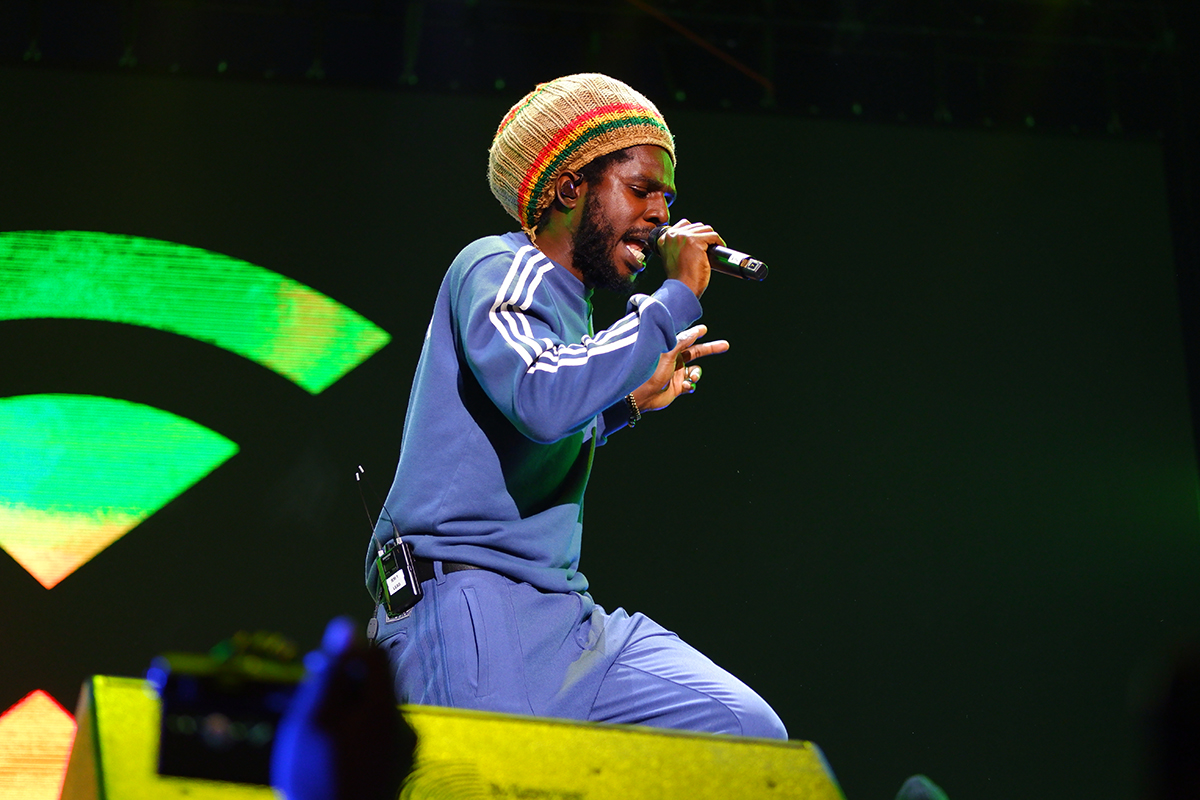