MUTEK Montreal’s 16th edition has made many (including myself) filled with great anticipation and excitement for the lineup of artists performing this year. The first night kicked off with Nocturne 1 (among other programs), which included performances by Cabaal, Hugues Clément, James Holden, and Ten Walls – all housed at MAC (Musée d’Art Contemporain).

Of the artists listed, Cabaal and Clément’s – both of whom are Montreal natives – performance held my interest most. Cabaal (Ben Globerman) was the first artist of Nocturne 1 and set the bar with an hour-long, provocative, stellar-influenced performance. The beginning of Cabaal’s set was incredibly enthralling with an atmospheric introduction of deep, bass-filled vibrations coupled with astral, ambient sounds, and red floodlights that shone through a layer of fog. There were no visual projections that accompanied his set, which I greatly appreciated; only Cabaal illuminated by the haze of red from behind him. Visually, this brought his live performance to a more heightened experience. Any sort of projection would otherwise have taken away from experiencing his music.

His set was such that I couldn’t exactly predict where his music would lead to next as there were continuous turns into slightly different musical directions, transitioning from the space-ambient sampling and manual arpeggiations of sounds to quickened hi-hat tempos to more brighter synth beats and then to full-on club percussive beats. However, his overall performance was still cohesive in the end with the recurring bass beats that make your spine shiver. As an audience/listener, cohesiveness in this type of EDM performance is what you really hope to experience. What particularly made his live performance excitable for me was the venue-shaking heavy bass beats that progressed after the ambient segment started to build. The contrast in sound was irrefutably refreshing and enjoyable, and Cabaal’s live performance was definitely a gratifying aural exploration. 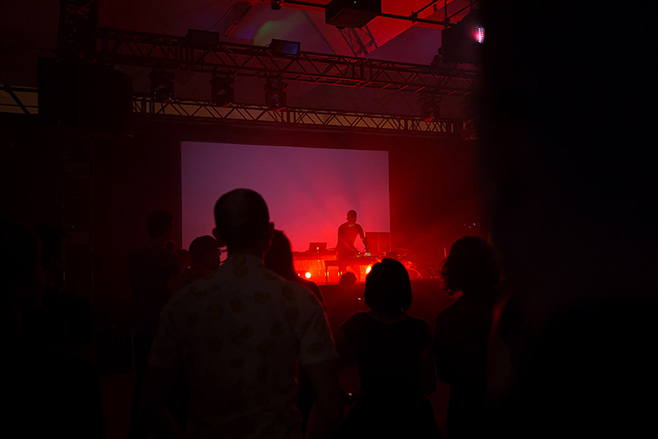 Hugues Clément’s new work, Dichotomie, was a much more sophisticated approach and development of his style in juxtaposing dualities. The last time I had seen his live video work was at Igloofest in early 2014, where his video work was evident of contrasted forms between classical and formalism art. In a year and half’s time, it is clear that Clément has really explored more complex and refined graphic manipulations to not only further his visual and conceptual theme of the organic (truth) versus the digital (deception), but to also comment on these visual manipulations that are heavily reflected in the 21st century, as seen through media and social acceptance/encouragement of falsified imagery.

The first half of his 30-minute video was the portion that I found visually entrancing with moving natural landscapes and 3D geometric forms that overlay and perpetuated within the scenery – such as the imagery of the pond amid the bleak, dead-winter field and a black, pulsating, 3D form with synchronized, black, spherical dots expanding outwards along to the heavy beats of the background music. The other extremely well done motion graphics was the flashing, geometric, fluorescent tube structure in a darkly-lit, digitally-created forest, the empty, black space with a large, disk of frail, white dust particles flying into abyss, and the haunting, slow-motion dreamscape of cotton weeds, slowly blossoming with translucent flashes of red/purple hues. The second half of Clément’s set revealed the explicit commentary of appearance in media, questioning what is beauty through the use of collaged imagery, such as mannequin hands, magazine covers, burgers, and a repeated, large advert of “Are you beach-body ready?” Although the two segments of Dichotomie were perhaps visually on polar ends, the exploration of the natural versus manipulation was made astoundingly clear and it is a pleasure to see the transformation of Clément’s graphic/motion video work.