Nocturne 2 and A/Visions 1  programs in this year’s MUTEK Montreal’s 16th edition was nothing short of a heavy hitter both in sound and visuals. Nocturne 2: Gleamings and Beamings program on the second night at MAC hosted artists Fake_Electronics, Dasha Rush, Takami / Sebastien Benoits, Atom/ Robin Fox, and Lumisokea. Of this list, Lumisokea and duo Takami Nakamoto and Sebastien Benoits were the performances I was greatly looking forward to seeing, and just as the title of the program describes, the set lighting were excellently designed, and as expected, both performances were brilliant. On the third night, A/Visions 1: Ballet Electronique program hosted duo Maotik and Metametric as well as a two-part performance by Hiroaki Umeda. The A/Vision program is a personal favorite that I have high anticipation for, and this year’s exceeded my expectations.

The energy level of Takami Nakamoto and Sebastien Benoits’s “Reflections” performance was on par with being in a sold-out concert with Benoits’s live, hard-hitting drumming on a full acoustic drum set and Nakamoto’s high energy body movements while programming and manually manipulating the sound effects. I had seen Nakamoto at last year’s EM15, who was performing as NONOTAK with Noemi Schipfer in the A/Visions, and he consistently brings to the stage that full-force energy which greatly adds to the whole set. The music consisted of hard drumming with an industrial/reverb effect and EDM beats that left the whole audience cheering and dancing. Of course, I cannot go without stating that their lighting set up with the row of flashing, vertically and spatially placed, fluorescent tubes, alongside heavy, synchronized, white strobe lights placed on either side of Nakamoto and Benoits, was visually the perfect lighting set up to match their sound.

Lumisokea’s set was an alluring and menacing experience with their heavy, trembling industrial and mechanical sampling and effects and their mainly triangular, green projections that descended from the stage downwards, onto and through the audience. The projection fell in a slim horizontal layer of light, so as it projected downwards onto the crowd, it had the very captivating effect as if the audience was being scanned in mass. These projections along with the increasingly rhythmic, bass-driven, harsh break beats were definitely a means to cause the audience to experience their performance in visual entrancement.

At the specially located Théâtre Maisonneuve quipped with its large screen, Maotik and Metametric’s “Omnis” struck the audience with geometric brilliance, taking everyone first on a spatial journey on screen and inside a winding tunnel, then to a space of cubic particles, and finally through a maze of industrial-like rooms of pipes. The opening of “Omnis” started off with one swift hit on a gong and progressed with ambient sounds, which was met with manual effects on a large bass drum in perfect timing to the visuals on screen. The visual transition to the room of long, industrial pipes was the turning point for the sounds to become intensified with loud effects as though the steel pipes were gliding against each other and another moment where it sounded as if fluorescent tubes of light were shattering and exploding. The visual for me that immediately put me in awe was the large, 3D creature, resembling the merged structure of a butterfly/bird that flew into the room of steel pipes and had the appearance of ominously looking onto the audience as its wings were in motion. 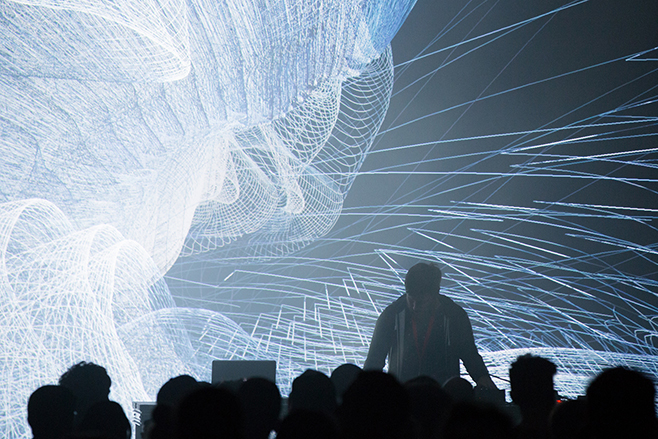 The second performance in the A/Visions 1  was the absolutely magnificent choreography from Hiroaki Umeda. The A/Visions specifically presents artists with audio-visuals that are extremely creative and provide the audience with the means to feel 150% enthralled and in rapture of the artists’ work, and Umeda’s performance could not have fit this description any better. He started off dancing slowly in complete silence, meticulously and fluidly curving his body, but not long after and in increasing tempos, Umeda transforms his body both into a malleable and robotic form, breakdancing into every beat of the mechanical, glitch-based soundtrack. Watching Umeda do this alone with the sound effects would have already been enough to excite the audience, but he furthers and outdoes the visuals by spectacularly projecting stardust, white noise/transmission static, and segmented RBG strobe overlays onto his body which in sequence of the glitch-based sounds at times differed from the projection on the screen behind him. But it is in the rapidness of his motions to match the high-speed sounds that made his performance unparalleled. Umeda’s choreography tests and breaks the limits our human capacity to move so intensely and strategically, all at inhuman speeds.

The selected performances in this year’s MUTEK have truly been an incredible pleasure to witness by some of the most talented, creative and exceptional audio-visual artists. You are surely missing out on experiencing the astonishing level of creativity and production if you haven’t gone to MUTEK yet!