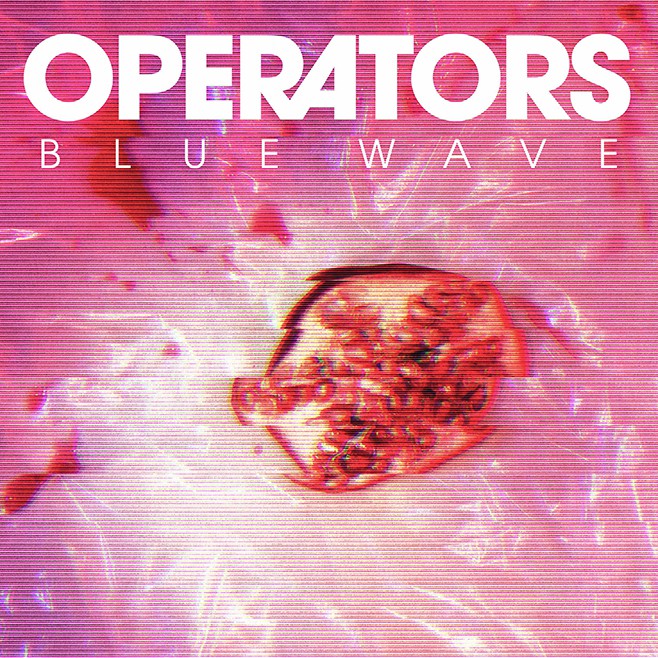 Dan Boeckner’s new band was booked blind for 2014’s Pickathon Festival based on his tenure with Wolf Parade. Operators played a wild, sweaty set in one of the dark barns on the periphery of the grounds. Their synthesized rhythms were no kind of fit for the fest’s folky Americana roots, but the capacity crowd, packed in and throbbing to the unfamiliar muscular beats, did not care.

As introductions go, this was astonishing: Even in this larval form, the band—Boeckner on guitar/vox, Devojka on synth—had a very clear sound articulated in catchy, dancefloor-ready songs. Operators have been honing their sound on the road for the two years since, which makes the unusual polish of their debut album Blue Wave understandable.

If this dropped out of the blue, it would be mistaken for a second or third record. It’s the product of a tight and experienced band, comfortable with their dynamic and confident in their sound.

On first listen, the album sounds in many places like an old friend. There’s a time capsule quality to the music: It’s dark and quirky yet driven, waves of synth humming and trilling a 1982 vibe without the sourness of nostalgia. Sonically, it could have been borne of the same England as Joy Division or Teardrop Explodes. The album’s excellent first single “Cold Light” hits all the right notes for fans of classic new wave like Modern English. All of which is quite purposefully high praise by comparison: Boeckner and company have pulled off a neat trick here.

Some forget that new wave bands were exactly that: bands. Synths may have predominated the overall sound, but many of the most memorable groups of that era had guitar, bass, and drums like the rock and punk bands that preceded them. Despite Boeckner’s considerable cred as a guitarist, the guitar hook opening of “Rome” and the crunchy solo of “Nobody” are outliers on the album.

It’s not a synth record or a guitar record, but a collection of songs in which the combination of instruments yields a whole greater than the parts. No word who’s on bass—Boeckner again, perhaps?—but whoever it is deserves credit for the tight, propulsive “Shape of Things” along with third Operator (and former Divine Fits drummer) Sam Brown. The whole project is heavy on grooves and sounds like the best club you never visited in early ‘80s Birmingham. Operators find the right balance among instruments that makes the enterprise work.

Blue Wave is one of those rare records that millennials will be able to gleefully share with their Gen X parents. It’s undoubtedly new and wholly contemporary, but will trigger a flood of appreciation for the bands that used to populate 120 Minutes on the golden age of MTV.