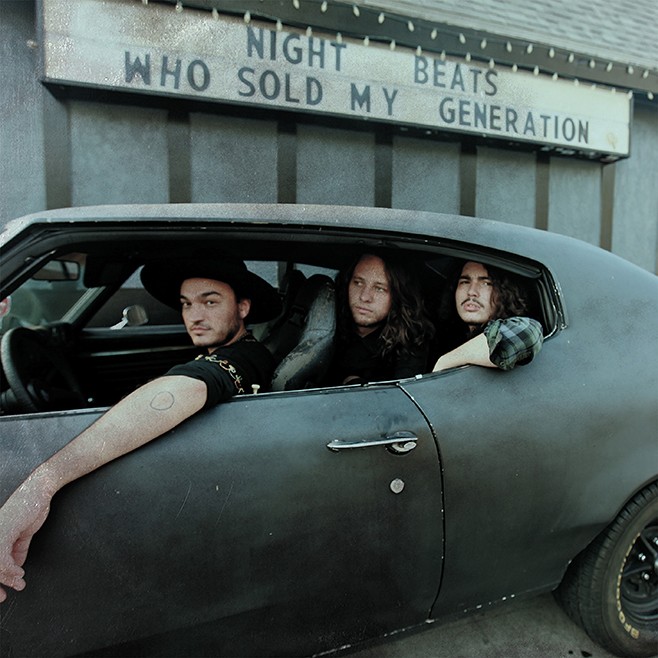 What does it mean to be “loud”? What does a “loud” band sound like? There’s the obvious definition, which is it’s a group that’s turned their amplification to eleven – but that’s not really the music, that’s the machinery. “Loud” is an intrinsic value, a definition. Most rock ‘n’ roll is implicitly loud, but that isn’t the rule. Who Sold My Generation by Night Beats is, paradoxically, not particularly loud.

This isn’t a value judgment: loud doesn’t equal good, if it did the teenager down the street who cut the muffler off his ‘97 Acura would be elected mayor. Similarly, “loud” isn’t something you need a virtuosity to create. Take some of the Top 40 nonsense out there, for instance. One singer, a couple back-ups, and some very nice computer software can make a lot of noise. When a devilishly clever hook comes on people perk up and mouth along. Whether you fancy that sound or not, it burrows into your ear and bounces around your head for hours, maybe days. That’s the meaning of loud.

Night Beats offers a different aesthetic: the anti-hook.  They have the instruments of loud rock ‘n’ roll – like guitars, bass, drums, jazz piano, and so on – but they recorded them for Who Sold My Generation as if from a distance. The enthusiastic saturation of distortion blends all the sound into a loose casserole. “Fuzz” is the rare one-syllable term that sums up the general feeling the music exudes. Put a microphone against the fur of a charging grizzly bear and that’s what Who Sold My Generation sounds like. Or, if I can mix in another dodgy metaphor, the prevailing sound is one of consistency, an amorphous vibe composed of a half-dozen instruments playing in an echo-haunted cavern. With effort, certain noise-making mechanisms can be picked out, but the music works best when it surrounds the listener as a single entity, blob-like.

Heritage-wise, Who Sold My Generation borrows a lot from classic rock and psychedelia. Put this album in a record store forty years ago and it might sneak into somebody’s record shelf without raising alarms with the Bureau of Space/Time Continuity (a relatively unknown branch of the UN that deals with troublesome time travelers). Night Beats’ contribution to modern music, however, is showing that there’s still room for good old fashion rock. Pounding rhythms made on real, live instruments, not computers, aren’t out of style yet. Like leather jackets and combat boots, Who Sold My Generation champions composition and technical mastery as signs of quality. A zip-zap iGizmo can spit out a nice electro-beat, but for some people the knowledge that a real human made this music, not software, imbues the sound with extra value.

Sound aside, the album has gravity by merit of its title and ethos of virtuosity. Who Sold My Generation is a comment on a culture that’s forgotten the value in doing something for themselves instead of buying a thing that does it for them. Night Beats is saying that we can still make good music on our own. It doesn’t need to be showy, or trendy, or – dare I say – loud; time, attention, and a used set of snares are an equal match for a two-thousand-dollar drum machine.

Ironically, the album will be sold in MP3 format for your convenient listening pleasure.