You’d be hard pressed to find a more enigmatic, come-from-nowhere artist than Lowell. From her collaborations with Apparatjik to splitting her songwriting time between Toronto and London to a live debut in front of 60,000 people, Lowell is not the type to passively hope for opportunities — she makes her own luck. And she brings the full force of her music and style to Arts & Crafts with her new EP, I Killed Sara V.

There will be comparisons to Lykke Li and Ellie Goulding, but pay no attention. Beyond her gender and use of electronics, there’s little in common between them. Quip interviewed her via e-mail in the weeks before her EP’s release to find out more about where she came from, what she’s up to, and where she’s going.

Eric Evans: You’ve recorded and performed with Apparatjik, Magne Furuholmen, and A-Ha, how did these collaborations come about?

Lowell: It was basically the result of both myself and Apparatjik looking for something unique and uninhibited to work on at that time. It started off with one of Apparatjik’s interactive experiments in which fans had asked specifically for them to create a piano ballad. They looked to me to be the one to write and sing it based on a concept (and some lyrics) they had made for me. We finished writing, recording, and releasing it all in one night. I was featured on the song as an ‘anonymous guest’ and people were really intrigued to hear more, and find out who I was so we decided to make an EP. Meeting them was empowering. Them inviting me to work with them was an honor, but there was no reason to be intimidated.

LW: “Take On Me?” Haha… actually over a Skype call a few months ago Magne sent me a poem/piece of music that was made up of lyrics of old A-Ha songs, cut together to make one new song. It was so beautiful.

EE: As an artist at the beginning of her career, does technology make things easier or harder?

LW: Making money off of sales is harder but you just have to be resourceful. Low sales don’t have to mean low incomes for artists. The Internet is a great platform if you know how to use it as a stepping stone for other aspects. I’m looking at branding ideas (fashion lines, merch, etc…) as a huge thing for me. As for getting out there, I really truly do believe no matter what day and age we are in, the devoted and smarter ones, or ones with smarter teams, are the ones who become successful. Talent just makes it easier. Money makes it less impossible. Internet is just a distraction.

EE: You’ve signed to Arts & Crafts with I Killed Sara V. EP. What is Toronto’s music scene like from the inside?

LW: Supportive! I drop by A&C on Monday’s after yoga just to say whaddup. Every single person in the office is routing for me and many of the bands are the same. I think that’s the whole point in the label and what makes it so great. It’s all about family. I am in complete control but when I ask for advice it’s given, and it’s never bullshit. 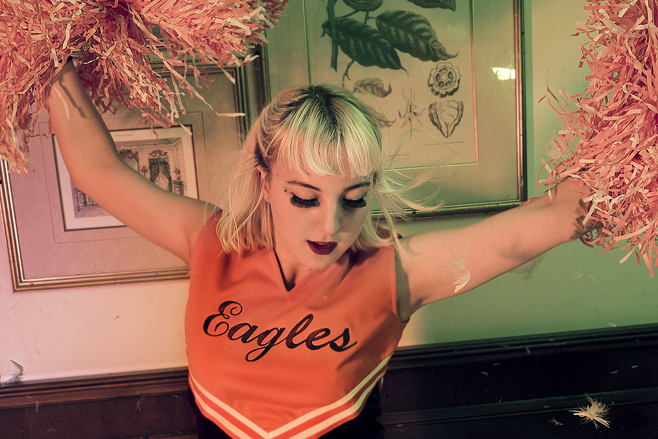 EE: In press releases and reviews there’s a tendency to describe an artist by comparing her to another artist. Is that frustrating, flattering, or both?

LW: It would be flattering if those comparisons were insightful, but usually they are just mindless attempts to reference my hair color and the fact that I too have a vagina.

EE: What artists would you cite as influences to your music or style if any?

LW: I listen to MGMT and Animal Collective, but mostly just tune the rest out. Listening to music isn’t a big part of my life anymore. I guess that would mean my main influences are pop stars from the 90s (I stopped listening to music around age 13). However, I have a lot of respect for Kanye and newer rappers out there like Danny Brown and Kendrick.

EE: What is your ultimate goal with music?

LW: With music specifically I would like to make a name for myself, not only as a singer but as a producer and songwriter. Sadly, I can’t name many female artists who have set the path for me (that is female producers or writers  — there are thousands of faces to pretty voices). It’s discouraging to say the least. People often ask me why there are no female producers. Sometimes it just comes down to role models you feel a likeness to. For younger females maybe they will have me to look up to. I want to be a master artist of all facets. What drives me is all the girls out there who wonder if they can, but have never seen it done with their own eyes. I call it boosting the lady stats.

Lowell’s debut I Killed Sara V. is released on the Arts & Crafts label on Feb 25. She’s also confirmed to be part of the lineup of Arts & Crafts’ Field Trip music festival June 7 to 8 at Fort York & Garrison Common in Toronto.