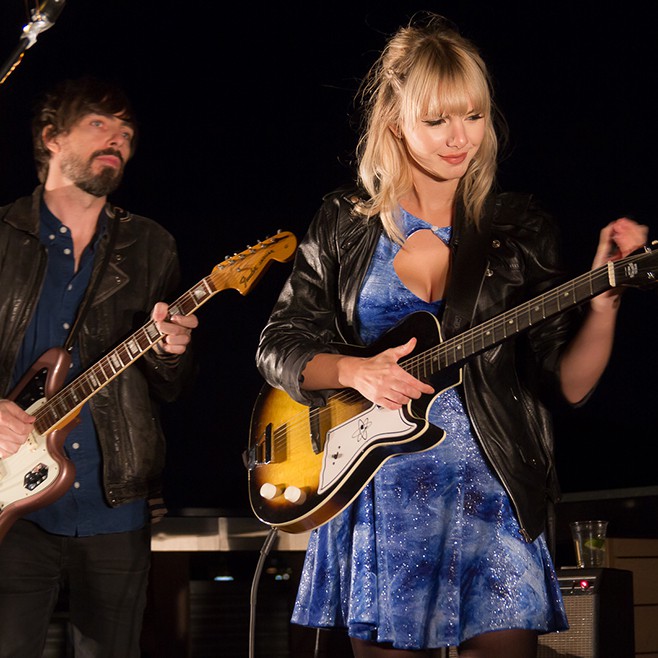 Kandle and the Krooks: Kandle Osborne, lead singer of Kandle and the Krooks, has excellent stage presence. To top that off, The Krooks feature some pretty reputable MTL musician including: Jason Kent, David Deias, Felix Duotte, and Tim Fletcher. The singer joked casually with the crowd at her sold out Saturday show on the Ubisoft Terrace. The setting was quite spectacular, overlooking Montreal’s Mile End at dusk. Pretty much everyone rushed to take a selfie with the setting sun. However, a brief interruption occurred as something/someone triggered the building fire alarm. Everyone was evacuated outside for a chilly 30 minutes, and the crowd dwindled down. But for those who stayed, Kandle and the Krooks continued. The sky was blushing hot pink and red as Osborne wooed the audience with her tender folk melodies: she sings, and it, legitimately, makes you melt. For all it’s hiccups, including a broken amp and the nine flights of stairs, this was, without a doubt, one of the most delightful shows of the festival for the talent and skill of the band alone.

John Waters: John Waters represents the unconventional: a counter-culture God. His Saturday night lecture/stand-up set at Theatre Rialto featured a bare stage with a single tiny table holding a vase of flowers, a glass and a pitcher of clear liquid. Waters looked clad in his classic mint, mushroom patterned suit, red tie and ornamental Vans slip-ons. He strung together a well-crafted narrative about his longstanding history in DIY queer-centric film production and its relationship with the current state of affairs in America and the world at large. Much like his films, Waters held nothing back. He was honest, heartfelt and hilarious, and as instructed, the audience kept their phones in their pockets; living in the whimsical moment that Waters created live.

Hand Cream, Not You: Following their Brasserie Beaubien show, where some troubling technical difficulties occurred, both Hand Cream and Not You played a secret show at Drones late Saturday night alongside Un Blonde and New Fries. Hand Cream hail from Montreal, and have a chill vibe about them. They could be a cross between the Beach Boys and Cluster: a post-pop noisy outfit with droned out, dreamy vocals. Hailing from Halifax, Not You has a similar vibe with a 90’s inspired tang. The women who make up the band are some serious musicians, and you can tell that they’re having the best time while onstage. Fellow bands watched on as they truly rocked the house, making up for their frustrations from earlier on.