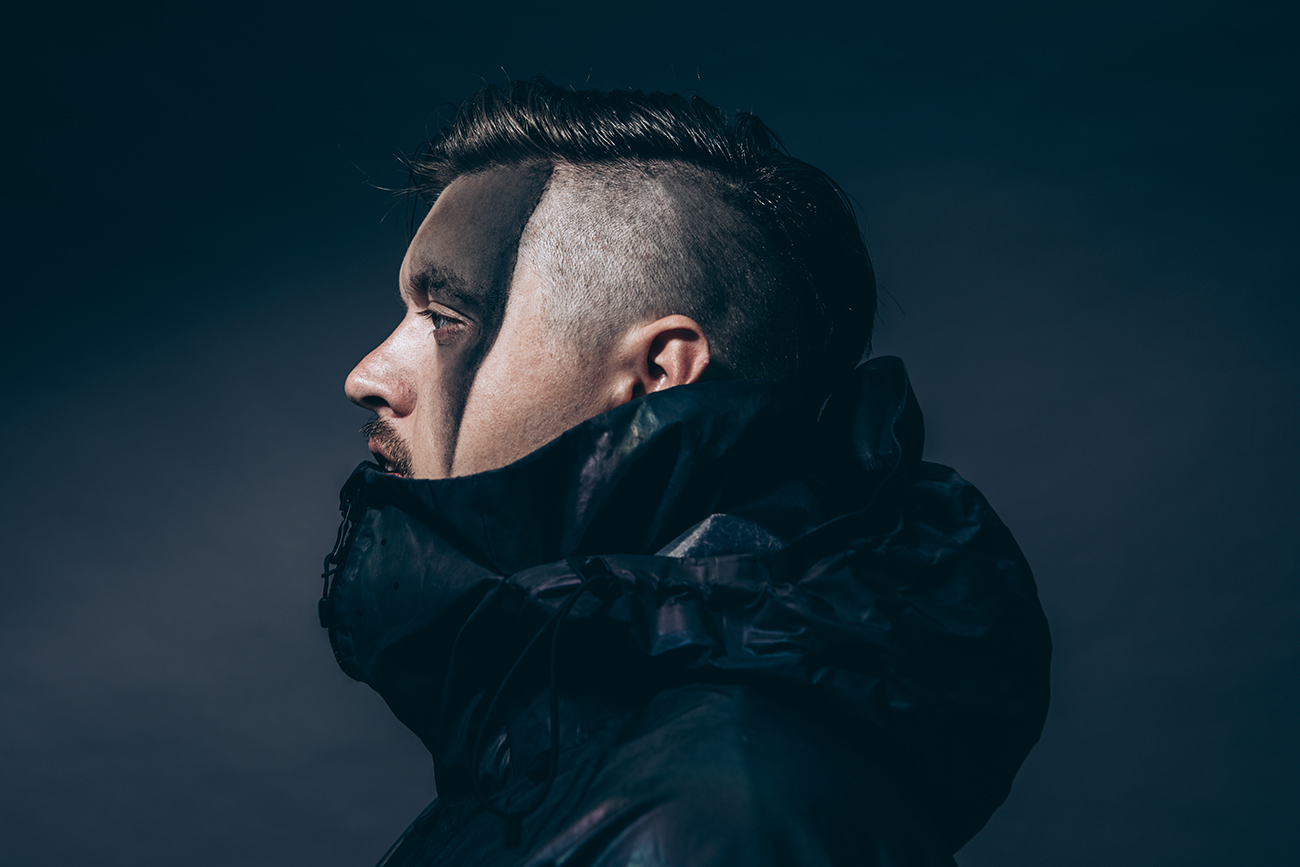 Flux Pavilion is an established name in the electronic music world. He is a well known EDM producers, DJ, singer-songwriter and label owner with the love of music deeply rooted in his early childhood.

The man behind the stage name, Joshua Steele, is regarded by many as a pioneer of bass music. But earlier this year Steele announced that he was “no longer a dubstep person” and this news was followed by a new album release .wav (via his Circus Records imprint), an album that manifests his arrival in the more melodic, atmospheric music world.

Reflecting on this shift Steele admitted that he fell into bass and followed the stream for as long as it made sense to him as an artist, “Now I’m jumping off that ride. It’s not that I never liked it, I’m more reconnecting with myself and what makes me happy” he shared in a press release.

The new album is an upgrade to the Flux Pavilion sound, “90% of the synths on this album are all analog, and I was really paying attention to the sound and to the tone of everything” hence the name: .wav, “To me, a WAV feels like a visual vinyl, a thing of beauty, a crafted piece of work.”

Having listened to the album a few times we wanted to catch up with Joshua to discuss this transition and his approach.

Kateryna Topol: Your new album .wav just came out – congratulations! How are you feeling about the release?

Flux Pavilion: Very, very good! And thank you for the congratulations. Writing the album was a slow process because I wanted to really feel every moment, so when it was finished it really felt like I’d had my time with it. There is something about that which is quite peaceful and gratifying in itself, in a way it didn’t matter how it’s received because I knew it was what I wanted it to be. To get such an overwhelming response is a feeling that I can’t possibly describe, but I feel super proud of my work and more connected with my fans than ever.

KT: Fantastic! There are quite a few collaborations on the record, how did those come about?

FP: Each song is its own little journey, some of them I wrote in a room with the collaborator, some of them over email and we still haven’t met. One of my favourite ways to work is to be sent a fully formed a capella of a song and then I write around it. It sort of feels like you have a character and you can put them in whatever environment that suits them, which is a totally different experience than trying to form the character itself.

KT: Ha, interesting! What was the process like collaborating in this environment?

FP: It’s actually not that different from collaborating in the past. Being an electronic musician I can really work anywhere, and due to constant touring I basically have too. There are countless tracks in my repertoire that I’ve written with people I’ve never met, and I don’t think that’s a bad thing. I like speaking to people and gathering ideas, but I generally like to leave a session with a good idea of the person rather than the song we are going to write. When it comes to writing I always prefer to do it on my own and be inspired by my meeting, rather than try to create in a room with someone else. So working digitally I get an idea of the person based on their musical ideas that they send, and I can respond with my own, it’s a nice way to process the work

KT: Very cool. Speaking of production, most of the synths on this record are all analog, what did you use to make them?

FP: Prophet 6 – UDO Super 6 – Moog Model D – OB6 – Deckards Dream – Digitone – Monotribe . . . . they are the main synths that I’d say created this album, but that’s not including the massive wall of eurorack modules that I’ve got, which is pretty hard to sum up. I’ve got a room at Ten87 which is basically littered with electronics, writing music is basically me floating about experimenting on different synths until I twiddle the right knob for the right moment in the right song [images below]. 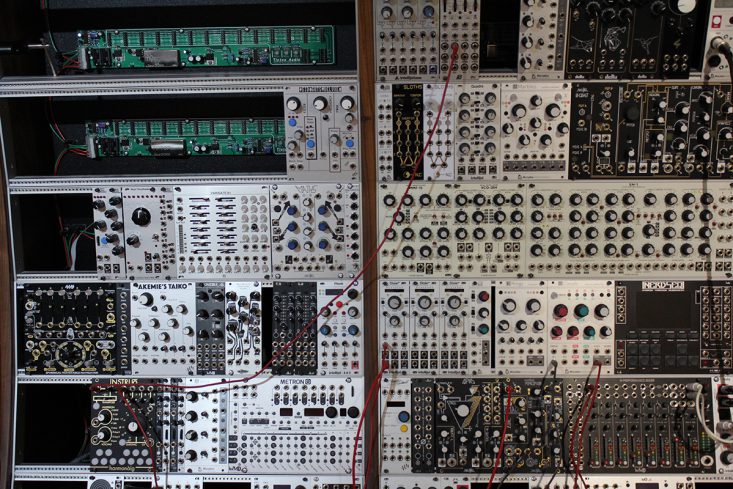 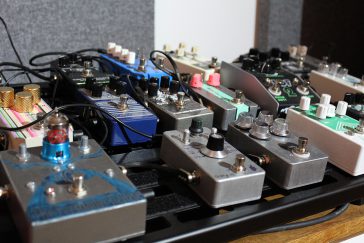 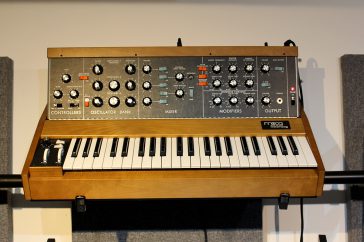 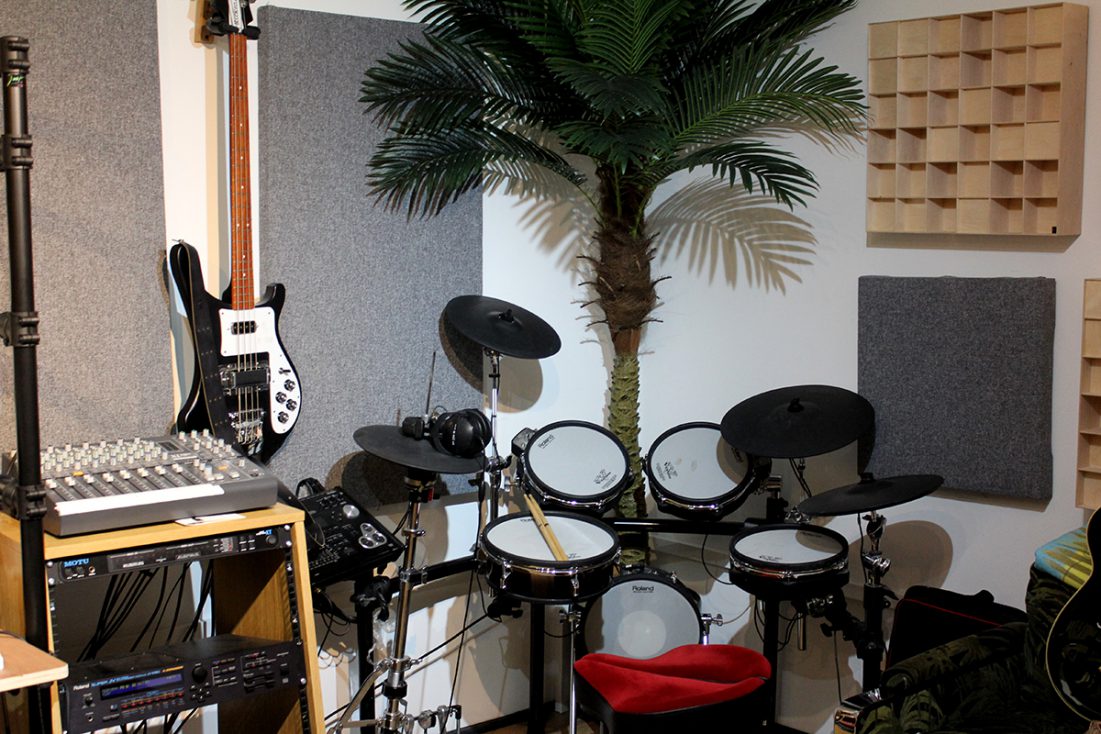 KT: You mentioned the shift to a more atmospheric sound is about reconnecting with yourself and what makes you happy – how has this journey of self discovery been going?

FP: Yeah it’s been a real treat if I’m being honest. I’ve always been a huge fan of atmospherics and I never really knew how to get it into my music. The beginnings of this album weren’t actually intended to be Flux Pavilion tracks, I was mainly exploring my electronics and creating long sprawling atmospheric pieces, then I realized I could work the other way round. I didn’t know how to get my new atmospheric sound into what Flux Pavilion used to be, but what if I tried getting Flux Pavilion into these new atmos pieces. That’s basically what gave birth to the sound of .wav.

KT: Amazing, any highlights or moments of enlightenment you’d be open to sharing?

FP: I write a lot of sketches and they are all over the place, never really going anywhere but I enjoy writing them. Then when I find or write a vocal I really like sometimes I’ll just go through old sketches and play the vocal over the top to see if it works. That’s exactly what happened with “Somebody Else”. The intro to that song I actually wrote about 8 years ago, and then the drop I wrote fresh for the album, it’s quite a nice feeling knowing that every second of music I write can potentially be used, makes me feel like no time is wasted, as long as I’m creating.

KT: You have a participative experience up on your website right now, tell us a bit about it…

FP: Yeah we have set up a submission for people to leave us audio files of their own voices. I did something similar on the track “Twitterbird,” I asked for people to sing a single note and then I cut them all up and created a keyboard that played the sung notes back to me when I pressed a key but in a random order, it was nice creating something like that with my fans so I wanted to do it again.

KT: Sound like a fun and inclusive approach. How many submissions have you gotten so far?

FP: Well this time it’s a bit different, it’s not actually about the audio itself, it’s about the waveform. I’m really fascinated by waveforms and using them to control and modulate other waveforms, it’s really the building block of complex synthesis. With the live show I wanted to get my fans involved so we have been using the submissions to modulate the visuals. I’m starting to get really tired of computer generated stuff and wanted my show to have a human element, having my fans control the visuals of my show feels like a cool way to do that

KT: Looking froward to seeing this show realize! All right, needless to say this past year has been different, how have you been staying motivated and creative?

FP: Yeah it’s certainly been an interesting year. I’ve been working with a therapist for the past 3 years and found the strength to get myself on some medication just before COVID hit. I can honestly say it has absolutely lifted my motivation and creativity. Depression has been something I’ve lived with my whole life, taking the step to reach out has helped me start breaking through the sludge and noticing the fresh air that was just out of reach. My music wouldn’t be coming out the way it is without the help and support of my team. 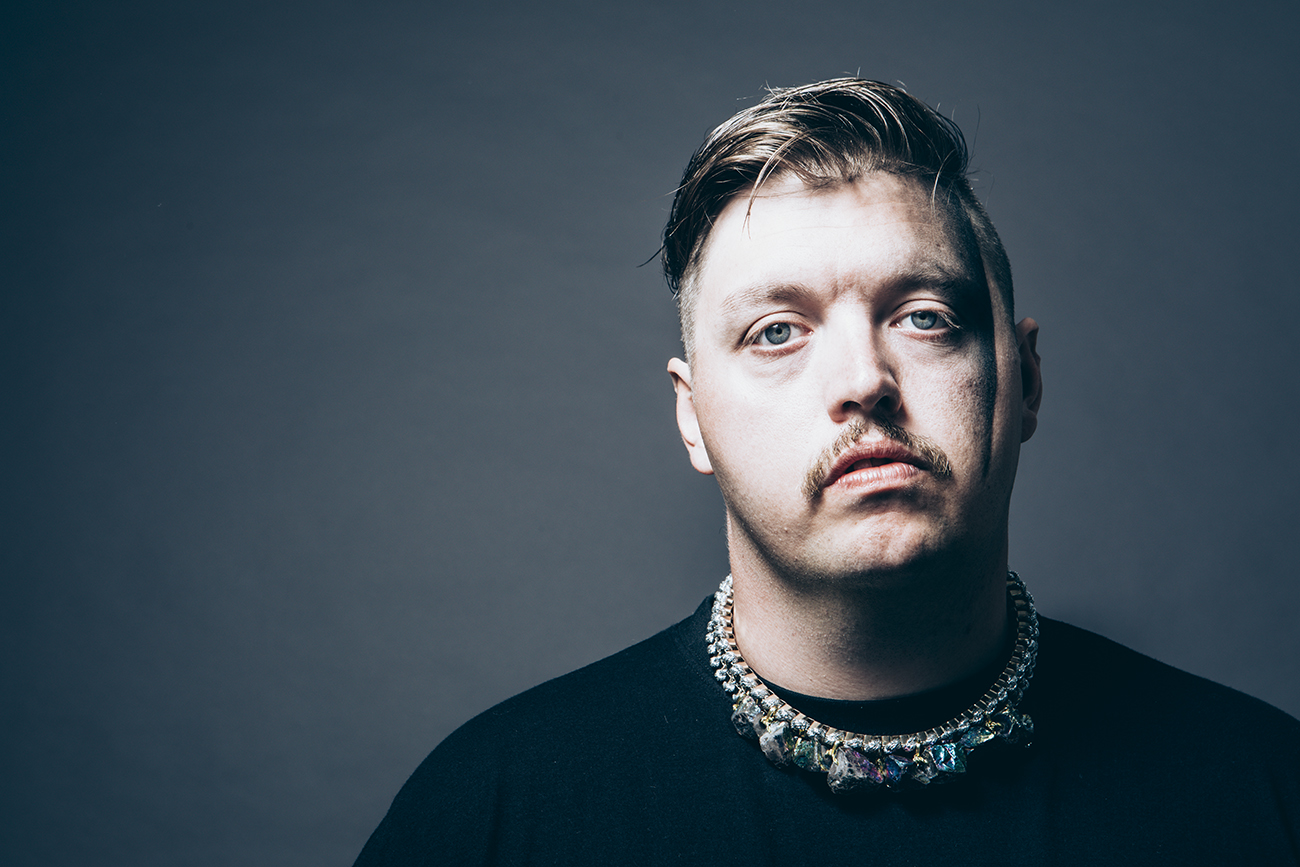 KT: You have also been working on a new Flux Pavilion show with guitar and keyboard, are you planning on having a live band on stage?

FP: I’ve actually already done a live band show, we never took it on tour because it never felt like the right time. This new show is a condensed version of that. Being able to travel as a one man band is one of the perks of electronic music and I wanted to keep that going whilst putting the DJ in a box. It was always about working out how to perform this music in a way that allows for improvisation, this show is the first step in a pretty exciting direction.

KT: Cool cool. What’s the first venue and/or festival you’d like to play this awesome new show in?

FP: Who knows, I’ve just put a live steam together to support the album and I really enjoyed the freedom of being able to perform in whatever space I want, thanks to a green screen and some amazing visual artists. It’s been born in my basement and imagined on a digital stage, I haven’t even thought about making it happen in real life yet. I think when I do I’ll use the opportunity to upgrade it all again!

FP: I’ve been doing a studio live stream called from FromtheLab, all episodes are on my youtube channel, there are a few tracks on my album that were born on these livestreams, so that was really cool to capture and would be a fun watch for any fans of the album I think.

KT: Awesome, thank you for your time Joshua and the playlist! 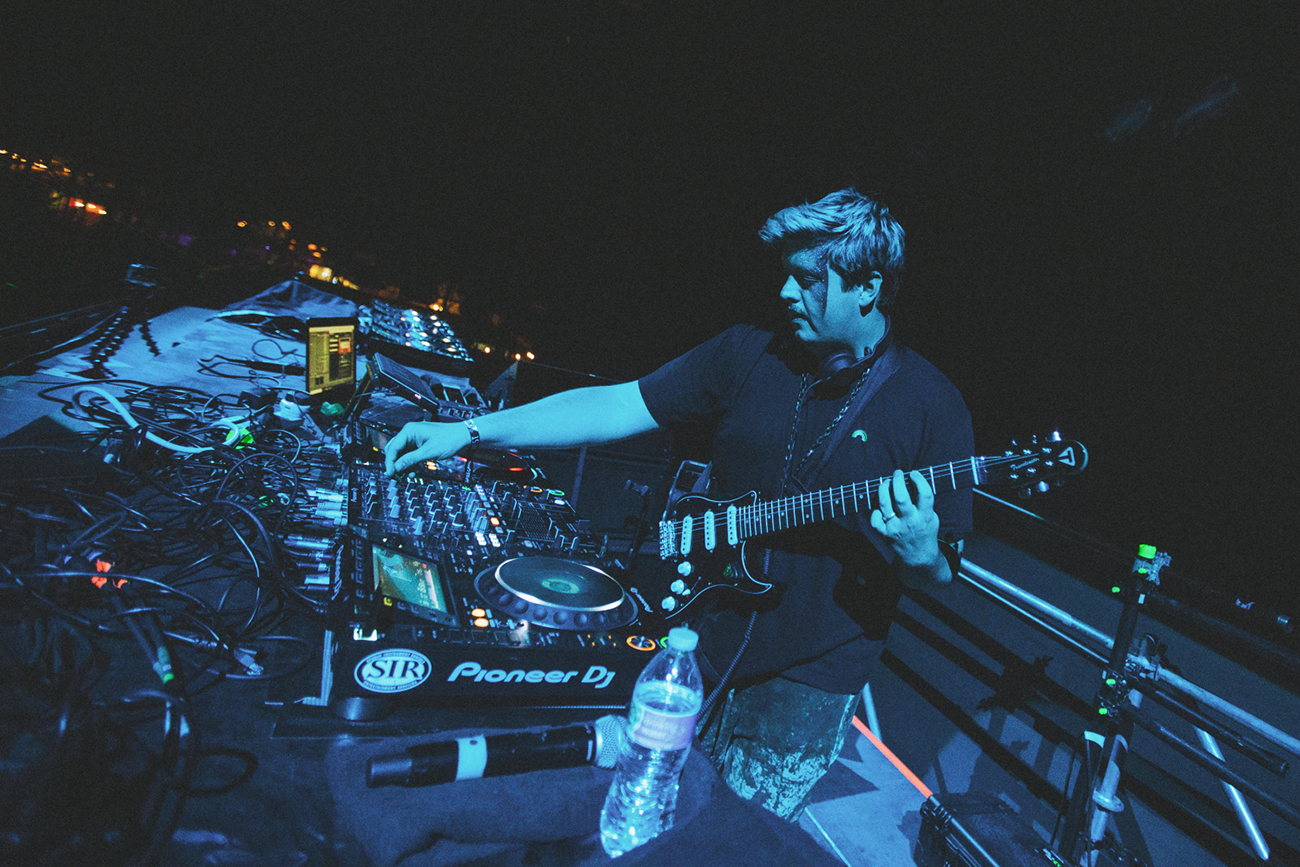