LA’s Capital Cities made a quick stop at Canada’s Edgefest during their North American tour for their debut album In a Tidal Wave of Mystery. Quip’s Richard Moore sat down with the duo’s Ryan Merchant and Sebu Simonian for a quick chat before their set.

Quip’s Richard Moore:  Tell us a little about how you two met?

Sebu Simonian:  I put out an ad on Craigslist as a producer looking for artists, and Ryan was looking for a producer and he was the only one to actually respond. He came over to the studio and the musical chemistry was instant and we started working together. We worked on commercial music for a while until we decided to form a band. So we met in 2008 and formed the band in 2010.

QRM:  Did working on commercials before forming the band help at all?

Ryan Merchant:  It helped us in a number of ways. Firstly when we were writing for TV commercials we would be writing constantly, so when you do that on a daily basis I think creative moments tend to happen more often because you’re creative on a daily basis. It was a very prolific period for us.

Thirdly it teaches you how to write really fast and how to just grab a creative spark and just run with it and not second guess your ideas. It was extremely helpful for us and I do not think Capital Cities would be what it is today had we not had that background. 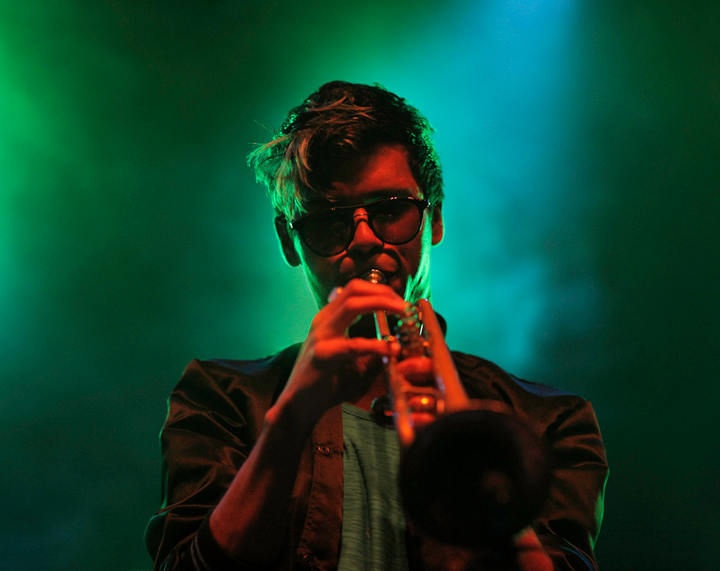 QRM:  You mentioned that you used to make jingles, any that I might know?

RM:  We did some work with Shaw Communications in Western Canada.

SS:  One of our songs was used for a Shaw commercial and is technically the Capital Cities track called “Beginnings.”  Then we did a Helzberg Diamonds ad, which can be considered a jingle, but mostly we wrote background music and not just jingles.

QRM:  “Safe and Sound” is currently the most popular song off your album but which song is your favorite?

SS:  I honestly don’t have a favorite song. We don’t get to play our entire album live so I guess those 8-10 are our favorites.

RM: If I had to pick one it would be “Farrah Fawcett Hair” just because it was the most fun to produce and it’s the most experimental track. So it is an interesting representation of who we are as musicians and kind of takes you beyond the pop veneer of “Safe and Sound.”

SS: Funny enough that’s the only track on the album without our voices on it.  Maybe that’s a sign we should sing less!

QRM:  What was it like getting to work with Andre 3000 on your track “Farrah Fawcett Hair?”

SS:  We were blessed to have the opportunity to have him record a verse on the track. We actually didn’t get to meet him, we sent him the track and he recorded his parts and sent them back to us. We had a quick conversation.

Check out some of the photos from the show on Facebook.