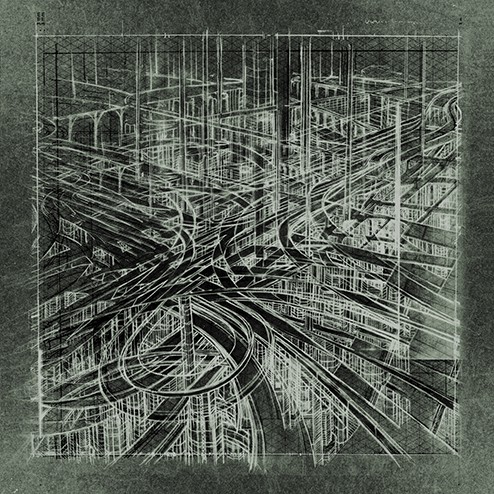 Concept albums, like Stevie Wonder’s Secret Life of Plants or Pink Floyd’s The Wall, hold a special place in the imaginations of music lovers because they exist as something more meaningful than a collection of songs.

Though each track might be more or less interesting than another, as a group they can evoke a feeling, or a change of feelings, that’s greater than the discursive jumble of thoughts in any other off-the-shelf LP.

So, to judge a concept album like Concrete Desert – the latest project by producers Kevin Martin (the Bug) and Dylan Carlson (Earth) – requires a bit of reverse engineering.

Imagine a world dominated by manmade landscapes, devoid of non-mechanized sentience. In every direction is cement. Nobody’s happy. Everything sucks. Basically, Los Angeles – except everywhere. This is the setting for Concrete Desert, as the first track “City of Fallen Angles” implies.

With song titles like “Broke”, “Don’t Walk These Streets”, “Hell A”, and “Agoraphobia”, a listener can get the gist of this album’s major themes without too much effort towards intuition. What the Bug and Earth have done is make an audio image of a certain type of self-imposed apocalypse.

By mixing a droning heavy metal with an ambient western electronica background, this hour-long LP takes the listener on a trip to what may soon be the future.

Concrete Desert feels a little like a soundtrack to the type of movie that involves skeletons riding motorcycles and long shots of a sun on the horizon, on the verge of going supernova. The guiding ethos of the album seems to be to capture the idea of what intense, concussive melancholia is like. It seems to say, “Hell isn’t pitchforks and earthquakes, it’s an endless, dry monotony.”

This isn’t to say that Concrete Desert is dry or monotonous, but it does have an aspect of that. The whole album walks a line that stays just north of boring, with an occasional toe-dip below. The proximity the Bug and Earth share with yawnsville can be excused, because to capture the bleakness of the world Concrete Desert inhabits, they have to indulge in a little dronage.

This isn’t a “get out of your seat and freak-out” album; it’s the opposite, and that’s a good thing. In a music world of screaming distraction, it’s nice to listen to an album that asks its audience to look inward and consider the self, and our place in the world.

Returning to the concept behind the concept album, to determine whether people will like Concrete Desert is, in part, a factor of the music’s quality – which is fine, great really – but also contingent on how vested a person is in the apocalypse. Want to hear the bottomless, gaping void of Hell? Concrete Desert sings that song.