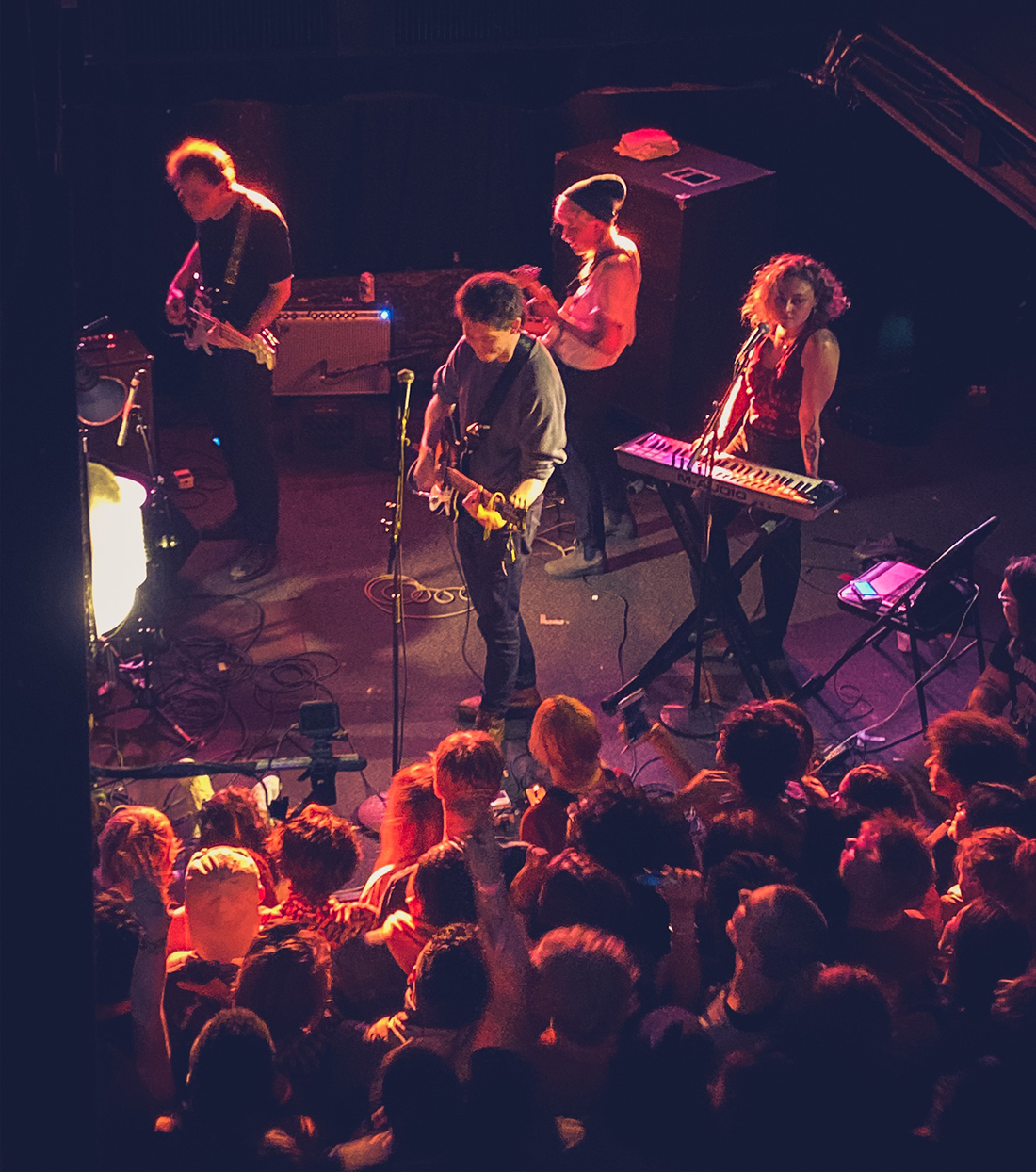 It was a sold-out show at Chicago’s Subterranean as fans marched into Wicker Park to see Surf Curse. The band is riding high on the success of their latest album Heaven Surrounds You. Walking up the stairs of the dimly lit room, the main floor was already packed from the stage to the backroom bar. Attendees on the main floor pressed in tightly to gain an inch closer to the band, some even sat directly on stage. Funny thing is the duo, Jacob Rubeck and Nick Rattigan, were upstairs causally talking amongst friends and fans. The guys graciously took photos and shook hands with those who asked. Passing by towards the VIP room, I stopped both men to quickly shake their hands and wished them luck. Both smiled and were thankful for the support.

Once the stage lights turned off, the crowd roared anticipating the band’s inevitable arrival. However, first Surf Curse’s stagehands hyped up the crowd by introducing a special guest guitarist to help out with the show. The artist was none other than Lillie West of Lala Lala fame. To prepare for the chaos that was about to ensue, Lillie made the crowd do some hot yoga stretches. Once the two men finally made their way onto the stage the fans went berserk. Rattigan sat at his drum set as Rubeck grinned throwing on his guitar. They began with one of their classic songs, “Heathers.” Almost immediately a mosh pit broke loose with everyone storming the stage. Once their vocals were warmed up, Nick said he wanted to play songs off their new record, Heaven Surrounds You, and they did so with the introduction track “Map to the Stars.” The new music showcase continued with “Memory”, “River’s Edge,” and “Labyrinth.”

The band was humbled by the enthusiasm the wild crowd displayed knowing their songs. “Last time we played at Sub-T a few years ago, we were in the smaller bar downstairs,” Rattigan said. “We didn’t think anyone would remember us.” To show their appreciation the band switched gears to some of their older songs such as “Ponyboy.” Rattigan explained the complicated drum technique needed to pull for the next song and knowing exactly which song he was talking about, “All Is Lost,” I rushed downstairs and bravely got right to the front. After a couple of rounds of throwing elbows and catching body surfers, I took my exhausted, sweaty body back upstairs to meet with friends and enjoy the rest of the show from above. But had I known what was to come I would have stayed. 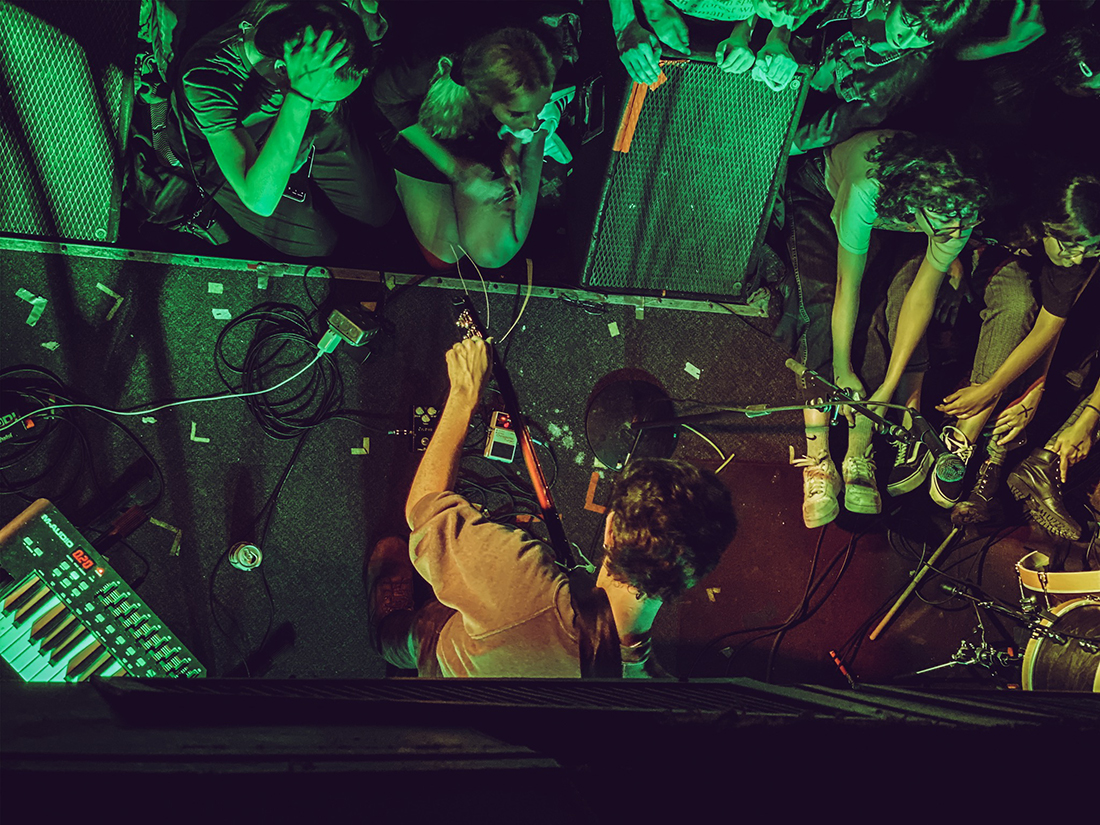 Looking down you can see the madness transpire. While people still had the energy to mosh pit, they didn’t care enough to keep on carrying people. A whirlpool of bodies fell on top of each other before being trampled. Others were thrown on stage knocking over Rubeck’s microphone and effect pedals a couple of times. The singer was understanding of the ordeal and respectfully brushed it off. They pressed on performing all three singles they released over the summer, “Midnight Cowboy,” “Hour of the Wolf,” and “Disco.” The first two are much slower in tone, finally giving the crowd a much-needed breather.

“Disco,” on the other hand, is the best song on the album, in my opinion, and a perfect way to end the set. The catchiness of the instrumentation and chorus was invigorating to hear. Nick stood up from his drum set and jumped straight into the crowd. The crowd completely engulfed Rattigan as they swayed him across each side of the room. Nick never lost composure hitting high notes before finishing the song and walked upstairs. Again people’s eyes were fixated on the stage not realizing the singer was walking right behind them. I gave him a hug thanking him for the fantastic show. Dripping with sweat, and out of breath Nick shook my hand again saying, “Thanks for coming to the show.”

As the band walked off stage to join Rattigan in the VIP room, fans screamed “Freaks! Freaks! Freaks!” to rally an encore. Surf Curse returned to the stage to give the frenzied mob exactly what they demanded by performing “Freaks” off their debut Buds album. This gave the restless crowd one last chance to mosh. Carrying on the trend of old songs, Surf Curse ended the wild night with their mellow jam “Forever Dumb,” giving the young fans something special to hold on to forever.