Kicking-off a stretch in Toronto by playing at Canadian Music Week, Australia’s Ben Campain – a.k.a. HOWQUA – is busy working on the follow-up to his acclaimed 2014 EP, Naked. The debut recording, a stunning composition of six unguarded and incredibly honest tracks, has caught the attention of many ears, including those at The Agency Group, with whom Campain signed last year. Consistently humble when describing the courageous move to document his struggle with depression through music – a decision that Campain chalks-up to choosing art over ego – Campain also explains that he never set out to be an advocate, but, simply, to be honest.

Taking a few minutes to chat with QUIP about his upcoming work and thoughts on making music, check out our interview with HOWQUA.

Laura Eley: Thanks to the magic of Google Maps, I can see that Howqua is actually river near Melbourne, Australia. What is your connection to that area?

Ben Campain: My grandparents had a property on the Howqua River, and we used to go there with family and friends when I was growing-up. [Some members of my family have] ashes that are spread over the property, so the name had a personal connection.

LE: What have you enjoyed about playing in Canada?

BC: There seems to be a real connection between Australians and Canadians, and the people here are so easy to get along with. It feels like a bit of a home-away-from-home… I came back over to Canada in September last year, when I did CMJ in New York. I did a tour of Canada, so I did the whole way across from here to Vancouver, and I hit Saskatoon… Calgary, Regina, I did a whole bunch.

LE: Do you think that Australia’s geographical isolation is a help or hindrance in terms of supporting local musicians?

BC: I think some of the best stuff to come out of Australia is from Western Australia. When you say isolation, I’m talking about within Australia, from Melbourne over to Western Australia and Perth, which is one of the most isolated cities on Earth. There are some really great artists to come out of there. And, I mean, there’s the Internet, but you don’t have the same influences when it’s a bit isolated, which can change the flavour. But, Melbourne’s also got an amazing music scene; there are lots of different artists and genres, and they’re very supportive of each other.

LE: The songs on your EP, Naked, are incredibly open and honest. Was that challenging for you to do?

BC: Oh, it was definitely difficult. I made a decision, where I’d done stuff in the past, but didn’t really feel like it was being one hundred percent honest to what I wanted to do. And so, I stepped away from that for a few years, and came back and said ‘OK, if I’m going to do this’ – and this is when I launched HOWQUA – ‘it’s going to come with everything; it’s going to be raw and honest and all guards down’.

LE: What was the reception like from people you knew upon listening to your new music?

BC: It was pretty scary; my music video ‘My Mindset’ was a bit of a representation of how I wanted to share my music. As scary as it was to just go out there, I felt like for the sake of the art, it deserved it. What felt so scary about putting that music forward was worth it for the sake of the respect I had for the actual art. I sort of put the art on a pedestal and said ‘well, this comes before me’, and if that’s going to be better for what I’m saying, then it’s worth it. 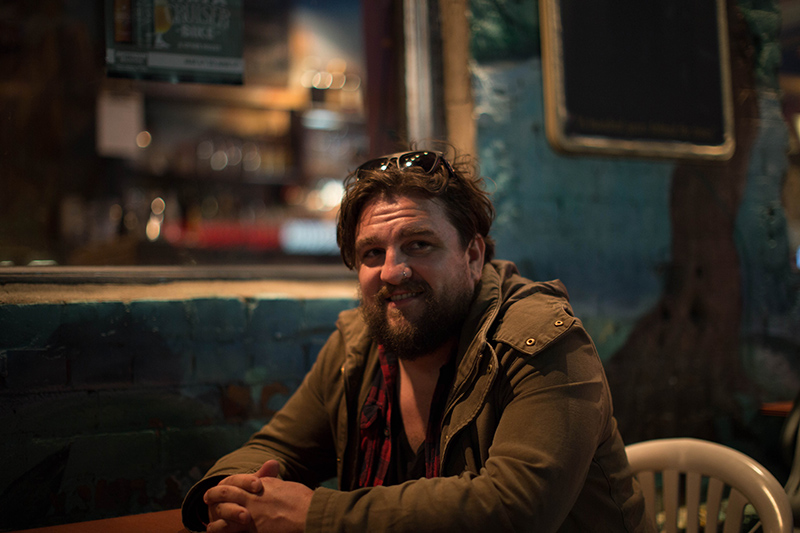 LE: Do you feel separate from your art?

BC: I suppose. Even little things, like not being under my actual name; I feel like there is an element of being separated from the art. The irony is that the art I’m creating is actually as much me as it can be.

LE: Was creating Naked a form of therapy for you?

BC: I think so. I’ve only ever played music for myself, which sounds selfish, but from my point-of-view, self-expression is something that helps me and that’s amazing if it can connect with other people and they can take something from it.

LE: Throughout your music, you talk about your experiences with depression. Is mental health something you’d want to be a posterchild for?

BC: I don’t know about posterchild, but I think it’s sort of happened in the extent. I’ve worked with the charity Movember in a number of ways, and I really love what they do, and if there’s a way what I do can help people going through different things, then absolutely. I’ve never aimed to be a representative or anything like that, but if something can help someone, I’m willing to put time and effort into helping people through their [experiences].

LE: What are you working on right now?

BC: I’m writing some songs at the moment; I’ve got a few newbies that I’m going to play [at CMW].

LE: Is song writing something that sort of hits you like a bolt of creative lightning, or is it something that if you work at for long enough, will come to you?

BC: Absolutely the lightning. I can try and write a heap of shit songs, but they don’t mean anything; all you can really do as songwriter is put yourself in some sort of environment where you can be inspired – but, what is that environment? I went over to Margaret River in Western Australia, and felt inspired and wrote songs for that EP, and then I came back and was in my mate’s apartment in Melbourne, and wrote another song that’s on the EP. So, you could say ‘I’m going to go out on a deserted island and relax and feel the energy of the coconuts, or whatever’, but that doesn’t necessarily mean anything’s going to come from that. But then, you could be walking down the street and see a person struggling on the side of the road, and that can create this whole explosion. Some of the best songs I’ve written have come out of nowhere; obviously its life experience – a broken heart always helps. I suppose a lot of my songs are just about being a human.

LE: Do you think that sad people write better music?

BC: I don’t know. I’m, as much as the next guy, happy to dance to some great tunes on the dance floor – I’m a terrible dancer, but when something fun comes on, I’ll groove. I don’t think it’s about happy or sad; it’s about honesty. If people are feeling the funk and they want to do that, that’s awesome. It’s about being real to who you are as an artist. Some of the music I’ve written is melancholy, but I’m definitely not against writing a happy song, if that’s what I want to say.