Earlier today Red Bull Music Festival announced its return to New York for 9 days of solid music programming. The festival launches on April 30 and bring together long-time collaborators and other groundbreaking artists including FKA twigs for two nights of shows.

FKA twigs hasn’t performed since her Congregata performance at the 2015 RBMF, which caused a minor earth quake in the music industry. This year she will debut an intimate and dramatic live show inside the Armory’s iconic Wade Thompson Drill Hall.

The rest of the lineup includes the likes of Rosalía, Teyana Taylor, Holly Herndon, and Tierra Whack. Holly Herndon‘s live show, showcasing her latest album release PROTO, which incorporates an ensemble of 8 vocalists, machine intelligence and learning specialists, choreographers, and visual artists at the Pioneer Works in Brooklyn. Rosalía will bring out a live band, dancers, and promisingly stunning LED visuals for a show in the newly renovated Webster Hall.

A few of the other US and Global musician are JPEGMAFIA, Onyx Collective, Moor Mother, and DJ Kampire, a pioneer of the East African new wave scene. DJ Kampire‘s empire, at home in Uganda, is her impressive work creating safe party spaces for women and the LGBTQ+ community. For this debut show at Black Flamingo, joined by Nyege Nyege Night, MCZO & Duke, and Bearcat, Kampire will spotlight the pan-African sounds made for the dance floor, including but not limited to gqom and afrobeat.
For a more detailed description of performances and tickets go to redbull.com/nyc. 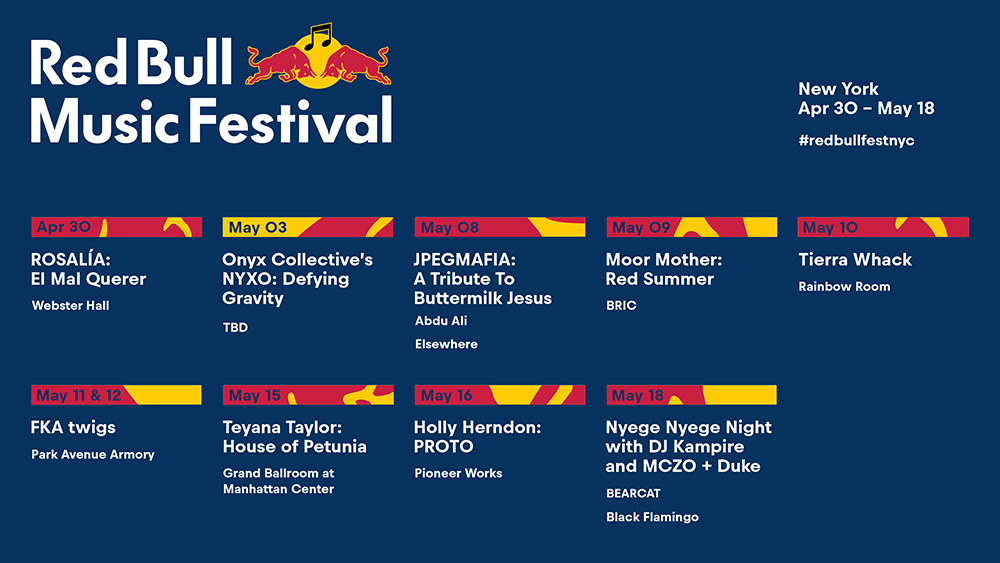