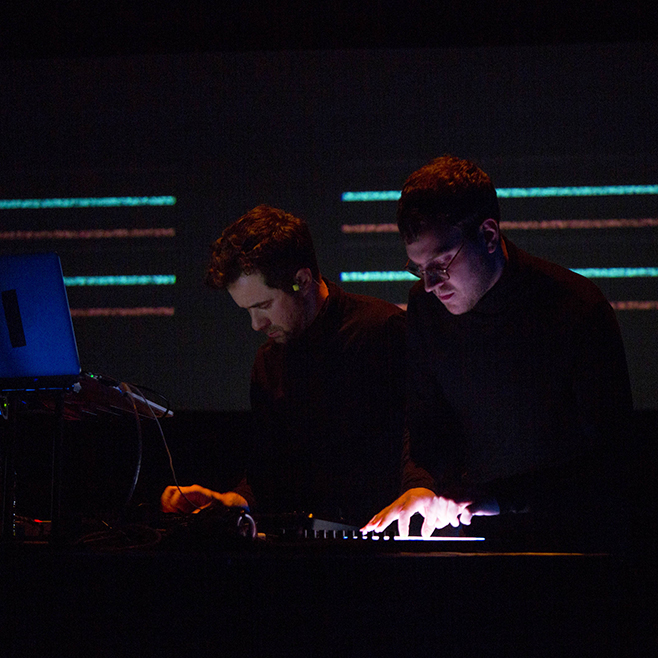 Red Bull Music Academy is taking over Montreal for a month of shows, exhibitions, and talks. Place Des Arts opened it’s doors to The Cinquième Salle. The room was nearly pitch black upon entrance, with a barely lit stage to match. The balcony seating felt awkward for those arriving late; people clutched their beers tightly as they tried to navigate the space. Photography was prohibited, and phones were kept out of sight for most of the show, in an attempt to embrace and engage with the full experience. But, as usual, a few broke the rules and pulled them out, texting nonchalantly under jackets, looking up every once and awhile to make sure the show was still happening.

As the lights dimmed following the second intermission, Jean Michel Blais and CFCF aka Mike Silver entered from opposite ends of the stage. Neither addressed the audience, but instead, made way to their individual instruments, heads down in a gesture of intense focus.

This was the first live collaboration between Silver and Blais, though both are currently based in Montreal, and are highly respected in their individual creative fields. It has been a significant year in the realm of their careers, as Silver was nominated for a Grammy for his reimagined version of “Berlin By Overnight,” a striking violin piece originally composed by Max Richter. Jean-Michel Blais was signed to Arts and Crafts and has just released his debut LP Il, a mixture between classical composition and ambient sound.

The two collaborated effortlessly, or so their live show suggested. They displayed a minimal setup, with only Blais’ piano on one end and Silver’s laptop as well as a few midi controllers on the other. Blais perched in front of the piano, fingers gliding across the keys; he plays with such precision he could be mistaken for a pre-programmed machine. Silver is known for his creation of beautiful textures, layering found sounds over ambient fabrics and electronic drum structures; he did not disappoint, standing stoically behind his apparatus. 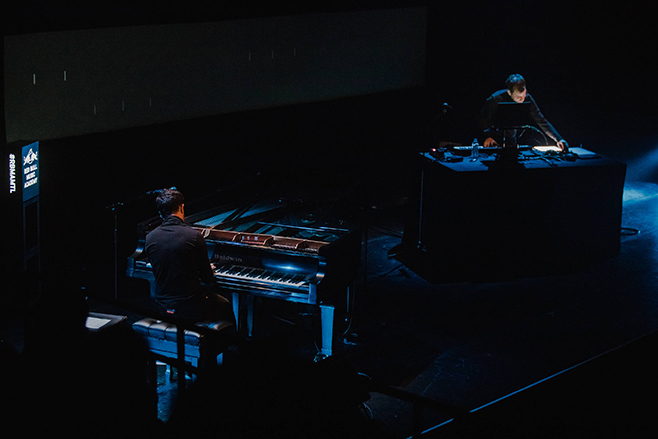 The pair created something suggestive of a cinematic experience; sound standing in for image.  Although visuals played out behind them (geometric shapes dancing in monochromatic and pastel colors), they crafted narrative by way of resonant noise, detached vocal samples, and atmospheric melody. Their compositions started off light and airy, but gradually built into complex and profound stories. Blais’ piano harmonies were artfully pulled through Silver’s setup to feed out looping ambient structures backed by throbbing and oscillating beats. Their re-conceptualization of classic pieces by Steve Reich and John Cage were stunning; Silver adding playful synth-tones into the mix, making things feel poppy and upbeat while still maintaining the emotional breadth and depth of each original piece. They performed an adaptation of Silver’s “Berlin By Overnight” remix, which was a personal highlight. The remix alone leaves the listener without words, but seeing it come to life was astounding. Blais took ownership of each note while Silver delicately assembled the intricate accents and vibrations to round out the song; they crafted something heartfelt and cry-worthy.

Blais spoke in French mid-way through their set, explaining to the crowd how he and Silver began working on the project. Later, Silver filled in the Anglo audience. They revealed that the performance was the culmination of a month and a half of intensive work and experimentation. Their dedication was visible, the show appeared to flourish without flaw. Blais and Silver drew the audience in close, held them tenderly in the folds of their mixes, moved them, and brought them outside of their quotidian experience.

They honestly captivated; the performance was a definite top feature of the ongoing Red Bull Music Academy series currently taking over Montreal. The series thus far has reached well beyond the typical Montreal show, and Jean-Michel Blais and CFCF seemed right at home among the high-caliber work that have been shown.

All images courtesy of RBMA