“So? Are we ready to go?” A fair question, asked by the young, tattooed, multiple-camera-toting woman accompanying Warpaint, one of the hottest acts at Pickathon 2014. The set—last show of the last night of the festival at the Woods Stage, the fest’s most iconic setting—was already 20 minutes late to start, an anomaly in a schedule packed tight with acts. Pickathon runs smoothly and efficiently from ticketing to parking to food service, so this delay was unusual. The sound guy’s response wasn’t audible from backstage but the answer didn’t seem to please anyone. Another five minutes later the band insisted on starting, ready or not.

The answer was not, and the first two tracks were spotty and uneven through no fault of the musicians. Soon the tech issues gave way and the band’s mood changed from frustration to elation. The setting is weird and intimate and majestic: a stage constructed of branches that wouldn’t look out of place on True Detective, music and light beaming through the trees to hundreds of attendees seated on burlap-sack-covered bales of hay, swaying in hammocks, lying in tents. 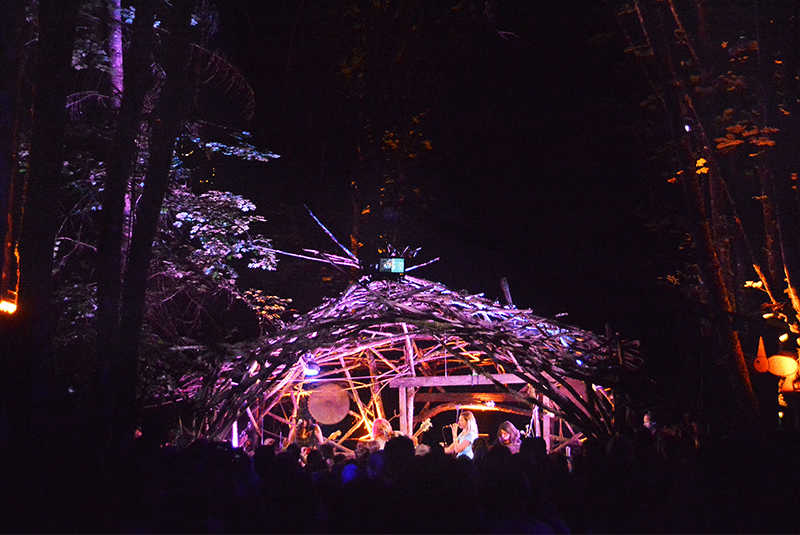 Pickathon is Portland, Oregon’s oddest music festival, originally a three day celebration of roots music but now evolved into a well-curated selection of old to new, bluegrass to electro-pop, acoustic to electric. Seven stages of various sizes spread out over Pendarvis Farm hosted 54 acts ranging from bluegrass to zydeco to metal to funk, all chosen and championed by the fest’s volunteer-driven staff.

Sets run an hour and go from noon ’til early morning. Several of the venues are intimate: converted barns fit for a crowd of under 200, or the Treeline Stage—a small amphitheater with stage, walls, even audience seating constructed out of shipping palettes. Other stages are large open-air affairs more typical of fests. Pickathon’s are sun-shielded by a wash of kite-style shades daisy chained together to form a patchwork roof of sorts. All are within easy walking distance of one another but the topography of the site minimizes sound bleeding from stage to stage. It’s quite ideal.

Friday | Pickathon’s multi-stage, multi-act structure encourages exploration. Leroy Thomas and the Zydeco Roadrunners played to a curious crowd on the Mountain View Stage, most of them pivoting on their blankets to watch Hiss Golden Messenger’s blues-inflected country set shortly after.

A short walk through the foremost of the camping areas and bluegrass quartet Old Buck was entertaining a rapt crowd with banjo, upright bass, and tight playing. The crowds at every stage are relaxed but engaged, listening.

Further down a rolling pathway into the forest and the warm, free-form vocals of Lonnie Holley come into focus. Holley’s style is bluesy vocal jazz accompanied by electric piano but sounds unlike any other—the songs are almost improvisational, or at least his delivery is. What strikes you is the range of music at hand, all within a five minute walk. That and how serene the whole scene feels despite the crowds there for three days of partying.

Saturday | Jonathan Richman played an acoustic set to a sizable crowd early on day two, looking vaguely comic on the largest of the fest’s stages with just a drummer accompanying him. The two set up at the edge of the huge stage, close to the crowd which was almost immediately enraptured by Richman’s loose, hammy dancing and giant grin. The progenitor of The Modern Lovers is pushing retirement age but seems 20 years younger: lean and agile, recalling some genetic splicing of David Byrne and Jimmy Buffett. That sounds terrible but the songs, though unfamiliar, induced dancing and laughter. Richman played the audience as deftly as his guitar.

The smallest of the venues, Lucky Barn, hosted the next two standout shows: bluegrass duo Mandolin Orange and solo vocalist Julianna Barwick. Mandolin Orange drew a huge crowd that overflowed from the back of the barn to, appropriately, the “overflow area”: a shaded outer wall of the barn with a large flatscreen and excellent sound system to transmit the show to those who couldn’t squeeze inside. Young, attractive, soft-spoken, Mandolin Orange—Andrew Marlin and Emily Frantz, a couple on and off stage—harmonize beautifully while playing fiddle and acoustic guitar on old-timey Appalachian folk music with a distinctly spiritual bent. Fitting, then, that they were followed by the vocal loop compositions of Julianna Barwick, which might be best described as secular hymns. Like other classically trained musicians who use technology to build songs solo on stage (Kishi Bashi, Tall Tall Trees, etc.), Barwick’s clean, strong voice is sampled and looped so she can accompany herself with layers and piano. The effect is similar to the elegiac excesses of Sigur Ros, a comparison not lost on Sigur Ros producer Alex Somers who offered to record and produce Barwick’s newest album in Iceland.

A short walk to the Fir meadows stage and Pickathon threw a wild curve with Mikal Cronin, whose live show is a good deal heavier than the jangly guitar pop of his albums. The roar and crunch of guitars juxtaposed with the ethereal layered vocals of the show that preceded it told the story of Saturday. 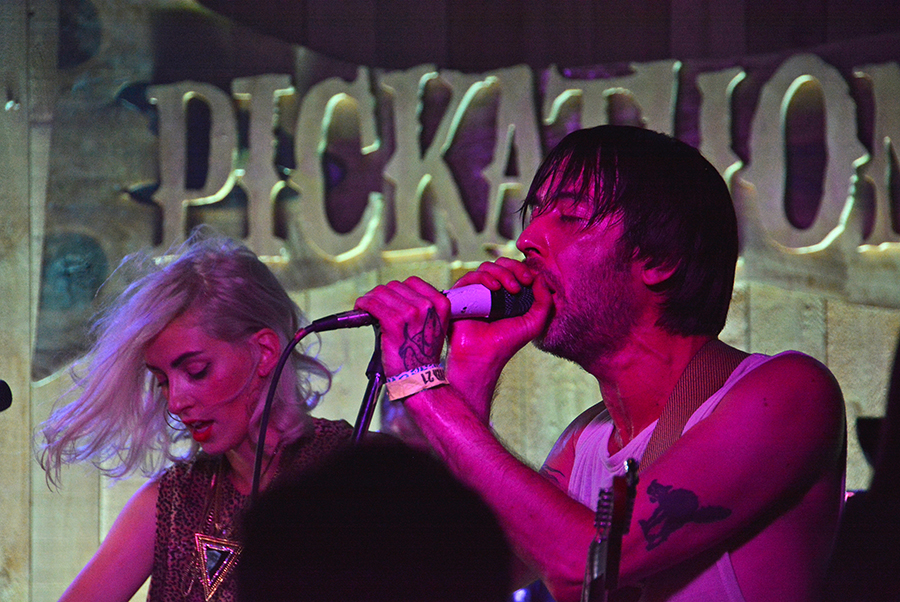 Sunday | Wolf Parade/Divine Fits singer and guitarist Dan Boeckner and keyboard player Sam Brown are Operators, a band so new they didn’t have a release to listen to prior to the event. Their driving synth-rock might seem like a strange fit for the festival but after the first few bars of their sound check, the Galaxy Barn started filling with curiosity seekers and by the end of the first song, the place was packed and bouncing with energy. If the drive and fury of the band’s part Joy Division/part early-Nine Inch Nails live sound translates to record, Operators will quickly make a name for themselves.

Further counter-programming the rootsy core of the festival, Foxygen tore through a rollicking set on the Mountain View Stage. Making up in enthusiasm what they lack in polish, Foxygen—fronted by Iggy Pop/Hedwig hybrid Sam France, who is every inch a rock star—sound like the Ike and Tina Turner Revue fronted by Peggy Suicide-era Julian Cope and it is a strange marvelous thing. Shirtless in leather pants, France spun and jumped alongside the band and three female backup singers, performing all their own material that nevertheless sounds like rock standards through a glam filter. Wildly fun, the band’s eccentricities could have turned off the audience had they not executed their thing so flawlessly. Foxygen had the crowd from note one. 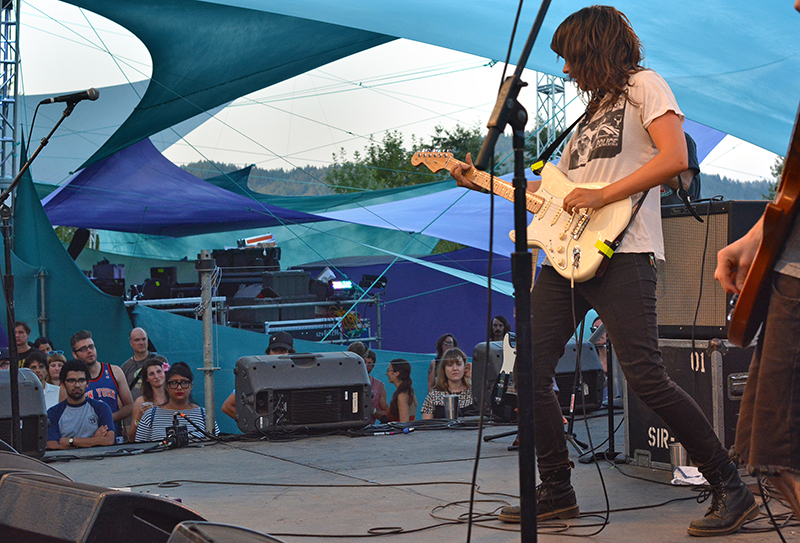 Owing to a bit of scheduling peculiarity on her part, Australian Courtney Barnett played two sets within four hours on day three with her small band (affectionately known as the Courtney Barnetts). According to Lou Reed you can’t beat a guitar/bass/drums combo for straight ahead rock music, and while there’s an argument to be made that Barnett’s laconic delivery, ironic storytelling vocals, and almost Doors-y grooves aren’t straight ahead rock, it sure sounded good. Known for her breakout “Avant Gardener,” Barnett’s songs all have the deft touch of a lyricist almost too smart for her own good, recalling the best of Robyn Hitchcock’s cleverness and hooks with a more melodic version of Joan Jett’s throaty howl.

After dark, Pickathon lights pathways through the woods with large inflated lights that recall the floating organic shapes of Jim Woodring comics, and those lights led right to six-piece Oregon band Blind Pilot. Very much a part of the folk-pop thing currently happening, Blind Pilot’s shows are emotional and resonant and the crowd responded warmly. Years spent touring with the likes of The Decemberists have honed Blind Pilot’s act; they sound polished and accomplished. Finally, Warpaint. The LA quartet is enjoying a popularity earned though aggressive touring and solid songwriting, and the forest surrounding the Woods Stage filled with people. Even before the sound guy got the bass up in the mix and leveled off all the mics, the crowd was swept up in the moment: leaves aglow with blue and orange lights, guitar chords resonating through the trees. It was the one major technical glitch and delay at Pickathon, but no one cared. The venue, and the event itself, had worked its magic.

See photos from the festival here. 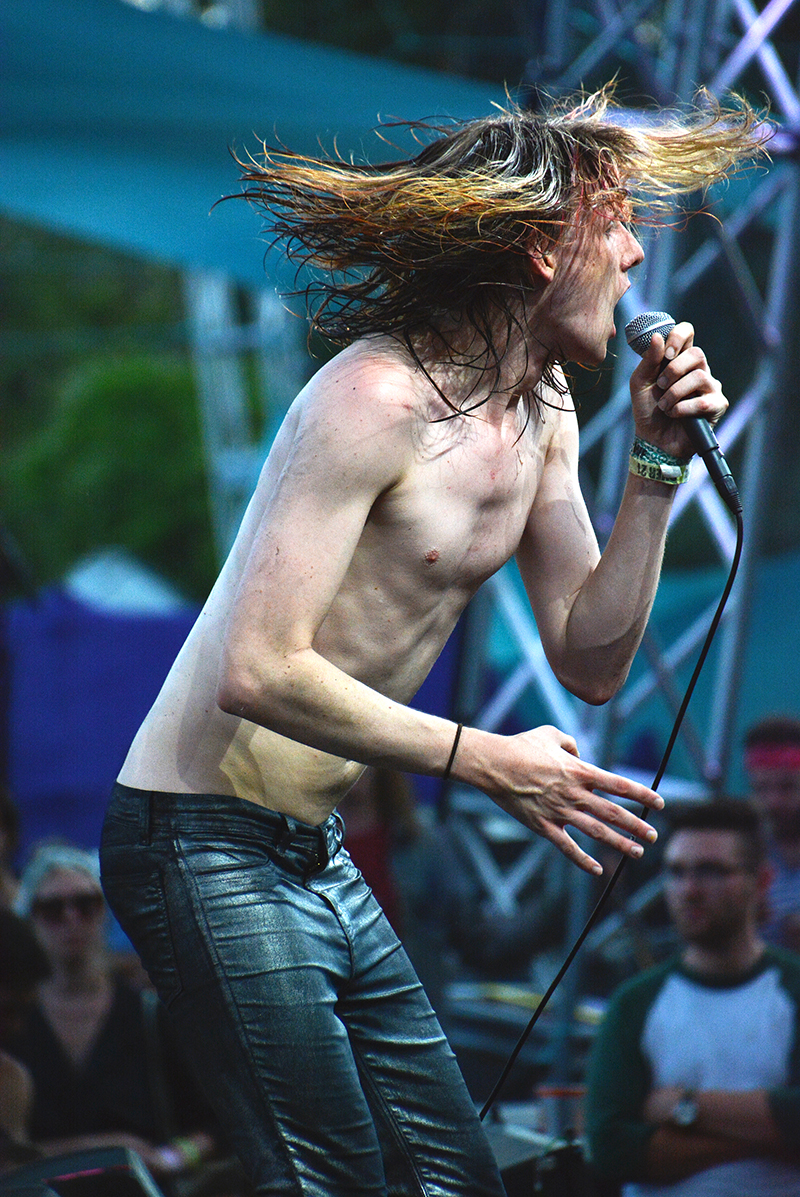