Oh, what a weekend it was. Lollapalooza 2014 was a mixture of blissful hot sunshine, a muddy mosh-pit and a little humidity in between. The shifting weather encapsulates Chicago in a nutshell: a little scrappy and imperfect; yet it still manages to remain welcoming, rain or shine. This past weekend marked the festival’s 10th anniversary at the Grant Park location. The weekend included a wide array of incredible music acts, a mouth-watering buffet of delicious Chi-town eats (best thing we ate: Bacon Mac ‘n Cheese Dawg from Franks ‘n Dawgs), teeming crowds ranging from baby rock stars to white-haired folks full of energy…all contributed to the fun, crazy energy that is (hashtag) Lolla.

The fest proved to be a dizzying cocktail of running from stage to stage and dancing to the beat of beloved artists, trying to stay hydrated, resulting in a very unique experience: The Lollapalooza Hangover. Reliving the highlights and lowlights of the fest in the post-Lolla glow is making us feel tired. And old. But what a fantastic time it was.

Mix & Match Headliners: Clearly the Lollapalooza folks know what they’re doing. Each year, the fest is curated to please a mass audience. If you don’t feel like going to Skrillex or Krewella (and we certainly didn’t), there’s a wide mix of tastes when it comes to the evening’s closing shows. Eminem pulled out the stops and brought Rihanna on stage, which was pretty damn cool. He’s 42 years old and maintains the same performance demeanor and energy from when he came on the scene at the end of the ‘90s. Personally, we were delighted by the offbeat indie choice of Cut/Copy at the Grove stage. The mesmerizing light show paired with hazy dance tunes was a heavenly combination. Kings of Leon killed it and Arctic Monkeys played a strong set as well.

Fantastic Accents & Indie Power Pop: One of the highlights of Lollapalooza is the international talent it attracts. Acts from near and far who made a big splash over the past year find their way onto the lineup. Very adorable accents added to Lorde and CHVRCHES‘ upbeat, enjoyable sets. Hearing lead singer Lauren Mayberry discuss her tambourine purchase in her plucky Glasgow lilt was truly entertaining. Brit Pop’s presence loomed large at the festival, with acts like the Kooks, the 1975 and headliner Arctic Monkeys showcasing positively charming swagger in addition to musical performance chops.

Being an outdoor festival, Lolla is the perfect venue for high-energy acts. For example, we love Sigur Ros (Lolla 2012 performers), however, the space did not suit their style. That said, indie power-pop acts stole the show at this year’s festival. Fitz and the Tantrum’s midday set blew the lid off the place (metaphorically speaking). The set sparkled with personality — it didn’t hurt that the lead singer continually thanked Chicagoans for kick-starting their career. Other favorite sets included Spoon and Young the Giant.

Great Food & Festival Flair: Chicago…not the best winter city. While concerts and festivals abound all over the Chi in summertime, winter activities consist of pretty much one thing: eating at new restaurants. We’ve got to stay warm somehow. Lollapalooza’s Chow Town brings together great bites from all over town for everyone to enjoy, local or otherwise. Didn’t get a chance to try that new restaurant in the four degree weather in January? Pick up a quick bite while you are waiting to see your favorite band. With an insane variety of options at fair-ish prices by festival standards, the Lolla food is definitely a highlight.

We are very, totally over flower crowns and frat jerseys. Sorry festival chicks and bros, let’s go for a more original look next year. What did surprise and delight us were the variety of fun festival “identifiers” people took to carrying around; to help them stand out in the crowd, to find friends, to express their own personal ridiculousness. Our personal favorites? A cardboard cutout of Kevin Malone from The Office, and Gary Busey’s floating head — people were crazy creative. 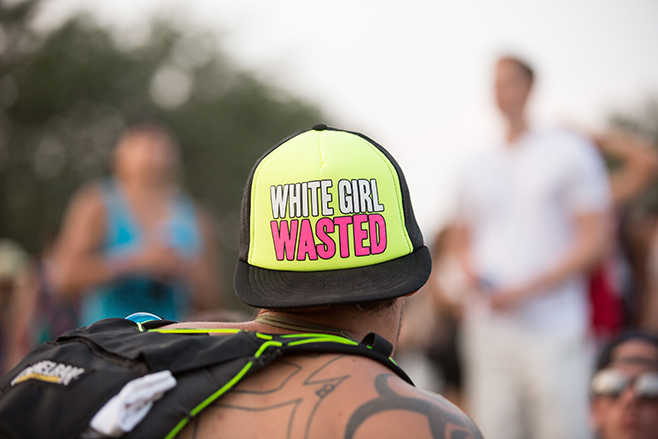 Too-Packed Shows: Going to Lollapalooza, expecting huge crowds at shows is normal. However, the Iggy Azalea show seemed on the verge of too packed. As we tried our best to inch toward Iggy-Iz herself at Perry’s Stage, the atmosphere felt sour. Tear-stained faces were spotted around the perimeter. Teenage girls had panic attacks due to the massive size of the crowd and elbowing. It’s probably due to the fact that she hadn’t yet exploded at the time of her booking last year. Still, it took a few deep breaths to fully recover. Iggy herself? A beast. A flurry of energy ripping across the stage.

Please. Please. Be Careful: We saw far too many people being carried off on stretchers — falling, or hurting themselves. The festival itself does a great job of making medical help readily available to all concert goers. Have fun, please! But if you cannot keep hydrated, keep your wits about you, or cannot keep yourself out of harm’s way, really think hard about drinking or ingesting anything before you throw yourself into a crowd of thousands in the summer heat. Please. Also — a note to very intoxicated people — please attempt a semblance of concert etiquette. If you’re smoking a cigarette in a huge crowd of people, you might burn someone. Be cool, seriously.