This has been a good year for Maribou State, English electronic duo Chris Davids and Liam Ivory: the band, on the coattails of their incredibly well-received album Kingdoms In Colour, have been on the road selling out shows across the world. Chris and Liam are very comfortable with this life of travel, sampling and recording snippets of speech, location sounds, and just really anything that helps them create the vibe of the place (using a field recorder). This latest release, more so than ever, has been shaped by travel, defying not just genre boundaries (as they always do) but also geographical and cultural ones – the duo use instruments from around the world.

But it takes a village to put on a show, especially the memorable experiences that Maribou State create. For the latest tour, which closed out this Saturday at Toronto’s Danforth Music Hall, the duo has been touring with two singers, a drummer, and a percussionist/bass player, in addition to the a dedicated opener Sea Moya. However no band member just does one thing, the stage experience is visibly collaborative and deeply rooted in the tight-knit, family-like bond that the tour crew has developed.

Sea Moya, a German psychedelic electronica trio, were first on, two shiny silver banners framing the stage with the band’s name spelled out in feathery white boas. The band’s members, David Schnitzler (vocals), Elias Foerster (bass, keys, vocals), and Tilman Ruetz (drums), are all very energetic. From the first few drum beats the crowd knew they were in for a treat. Elias Foerster (kind of looking like a ’70s boy scout) after playing a spacey opening on the keyboards proceeded to dance with his guitar and it was the best thing I have seen in a very long time. 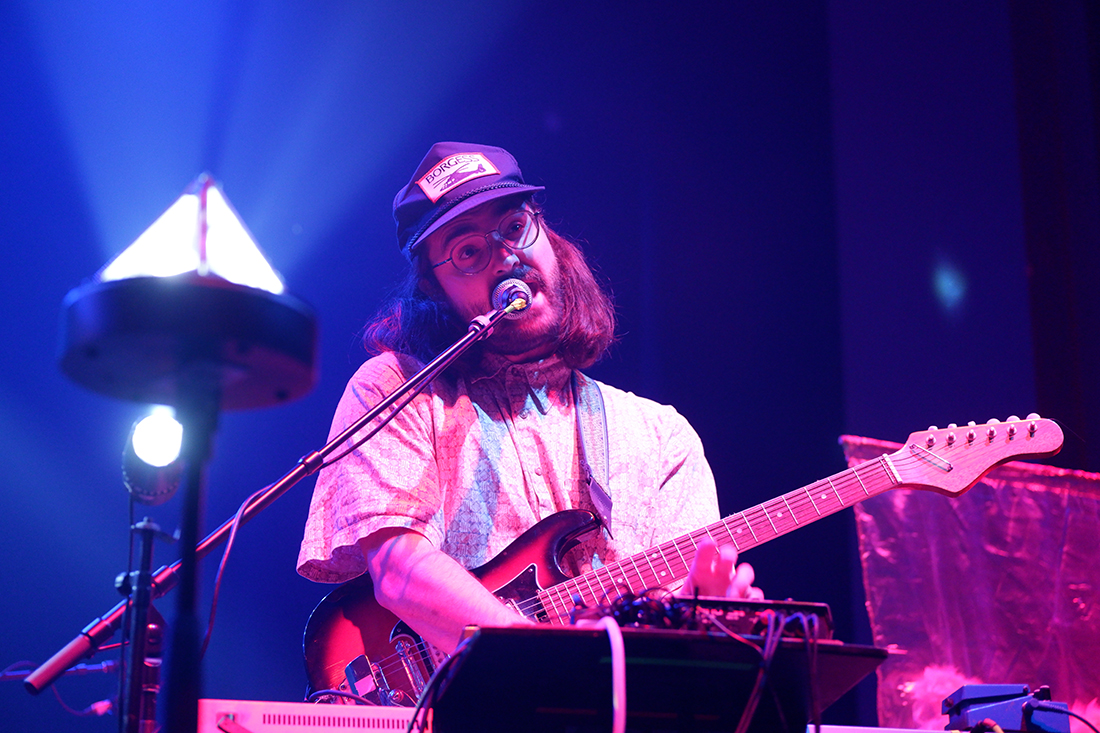 Sea Moya are inspired by a wide range of unexpected influences and play a mix of kraut beat, afrobeat, and electronic music. Their recent album, Falmenta, was recorded in complete isolation in the Italian Alps and is very much a collaborative effort. Live on stage, this unity is obvious through their performance as David and Elias take turns singing, telling stories, and commenting on how “beautiful” the audience is. As a part of their introduction, Schnitzler talked about being on tour with Maribou State and what an incredible experience it has been, this sentimental end of the tour feeling became a theme for the night.

“This next song is a sexy song,” David announced, pointing out the dark corners of the room which the listeners should take advantage of, “It’s called ‘Bedroom’.” The sexy song was followed by a new song, “Jungle,” and then came this incredibly odd monologue: “Touch your phone, wherever it is, just find it and touch it. How does it feel? Do you like it, do you like it, do you like it,” Elias’ voice faded briefly before he went on describing a somewhat psychedelic experience. On record Sea Moya’s music is reminiscent of Tame Impala or Toro Y Moi, but live, it is something else – it’s a much more engaging, fast-paced, interactive experience that travels you to the tie-dye colored corners of the universe. 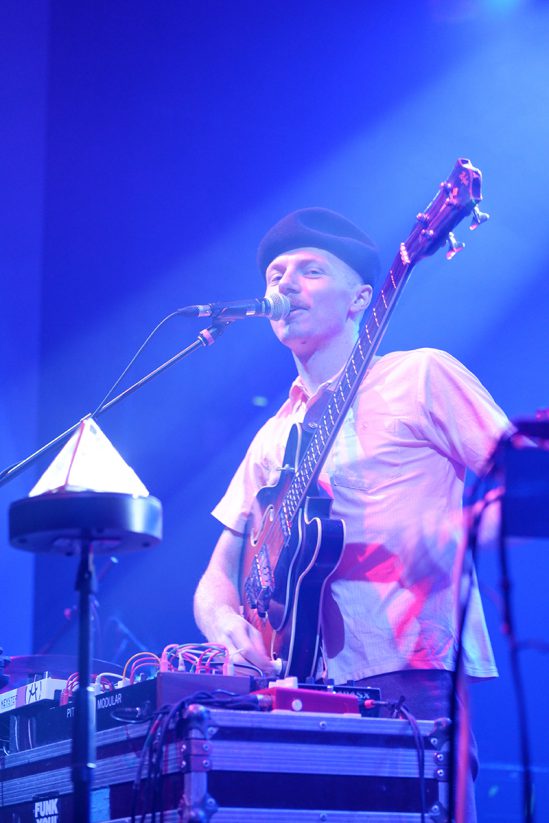 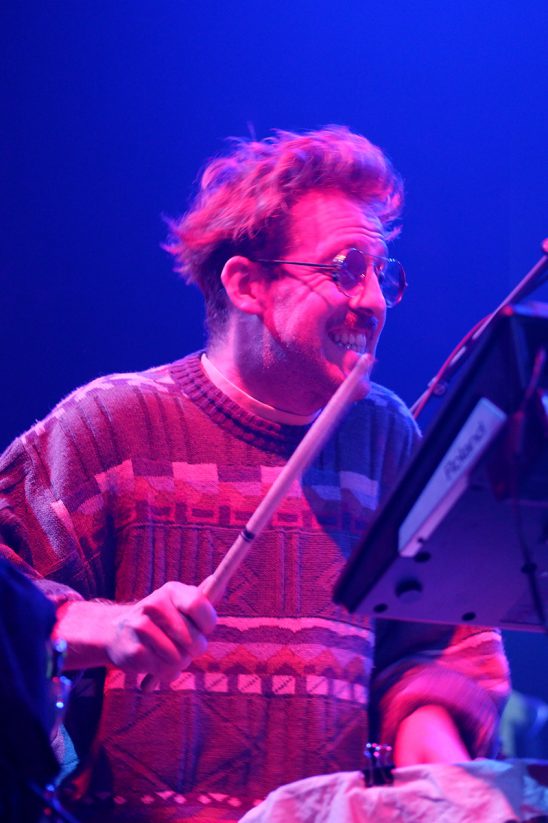 At one point, Maribou State’s percussionist, barefoot and all, came out on stage to play a song with the band, a song that ended with everyone hugging, individually and as a group, the emotions shared between band members and the continuing conversation about how truly wonderful this tour has been, by Maribou State as well, created (I am certain not just for me) a desire to travel back in time, join the tour crew, wear matching sweaters, and be one of the tour-family members with this fantastically friendly group of people.

Shortly after 9 pm Maribou State casually strolled out on stage to the screeching cheers of the audience. On the second track, Liam invited out the singer, songwriter, and multi-instrumentalist Obi Franky, who throughout the show performed all Holly Walker’s vocals. Chris and Liam were set up opposing each other, drawing on one another’s energy. For the better half of the show, Chris was playing guitar, while Liam was telling stories, reflecting back on the tour, and on occasion turning around to face the drummer and assisting him on percussions. 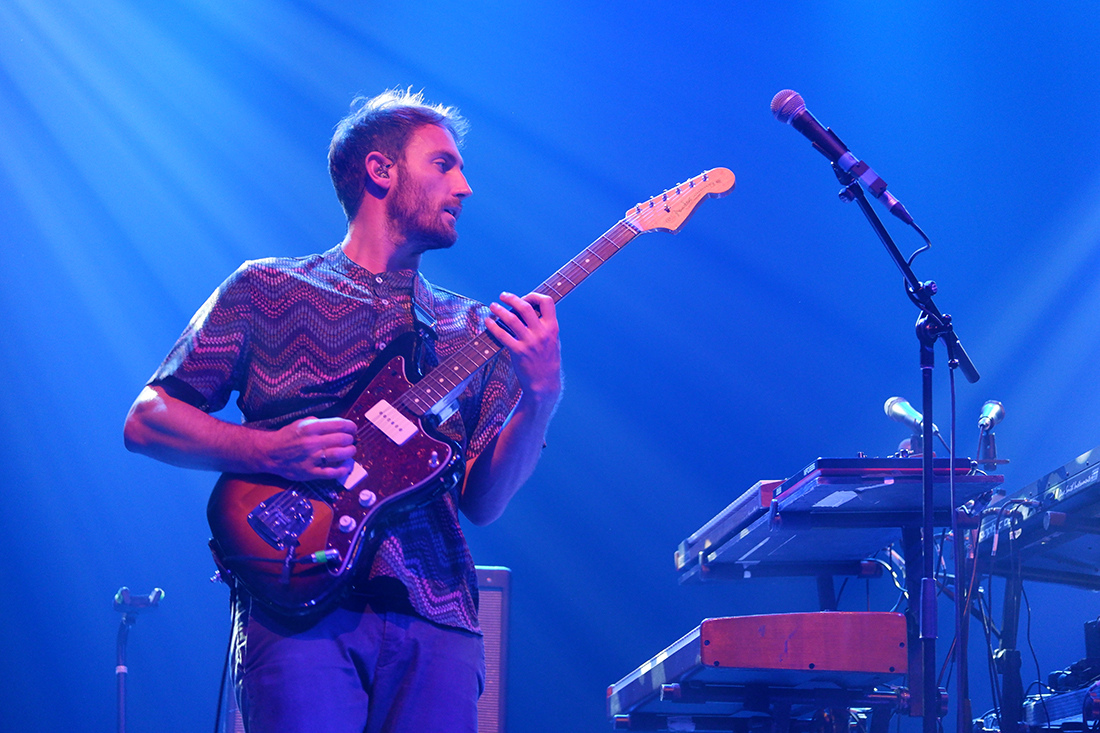 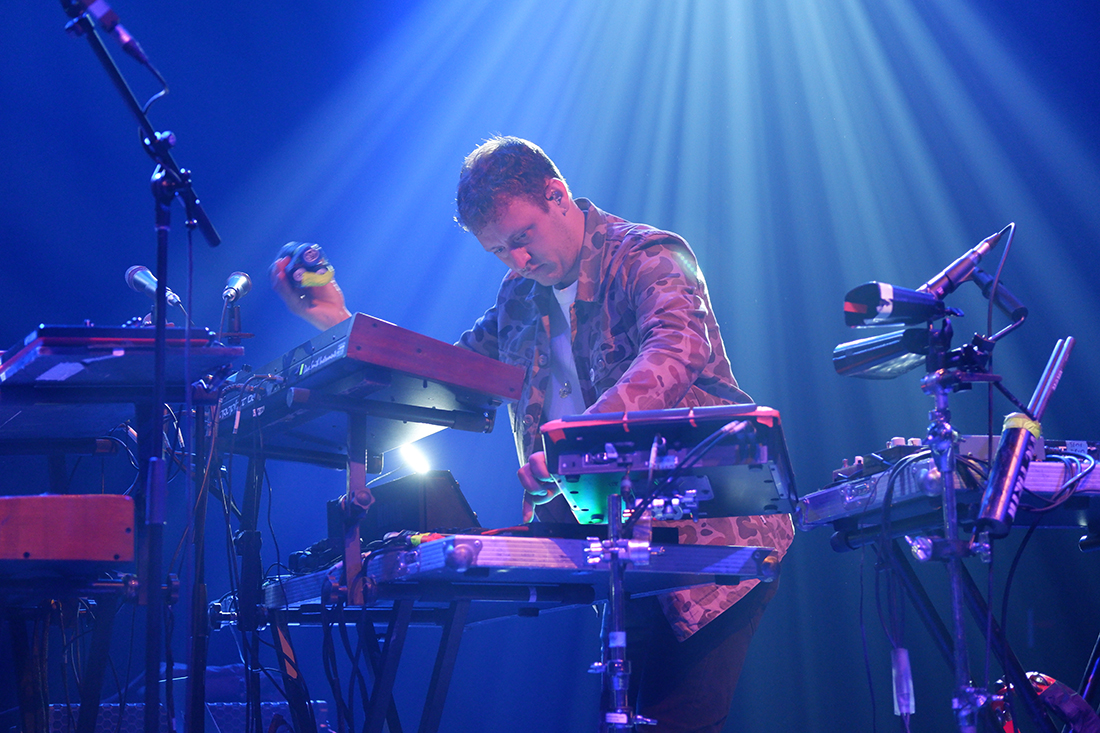 To quote Mixmag Maribou State have a way of “capturing the euphoric warmth of the dancefloor,” creating a textured, atmospheric musical experience that invites the audience in. Throughout the set, the duo went back-and-forth between tracks from Kingdoms In Colour and Portraits (2015) including songs like “Steal” and “Beginner’s Luck.” Obi Franky’s renditions of “Wallflower,” “Midas,” and “Nervous Tics” were a spectacular display of voice and stage presence that the front row of the room went crazy for. Another surprise for the evening was the North Downs, who joined Maribou State and Obi on stage for “Kingdom,” dancing and adding his own flavor of hand-held percussion to the track.

For the last song Obi, who has now shed her shiny stilettos, came out to sing “The Clown” (originally performed by Pedestrian). This highly energetic take on the song (see second video teaser) vividly brought to life by the entire stage collective, served as a precursor for the one track encore – “Turnmills” – which ended this very epic Maribou State tour. 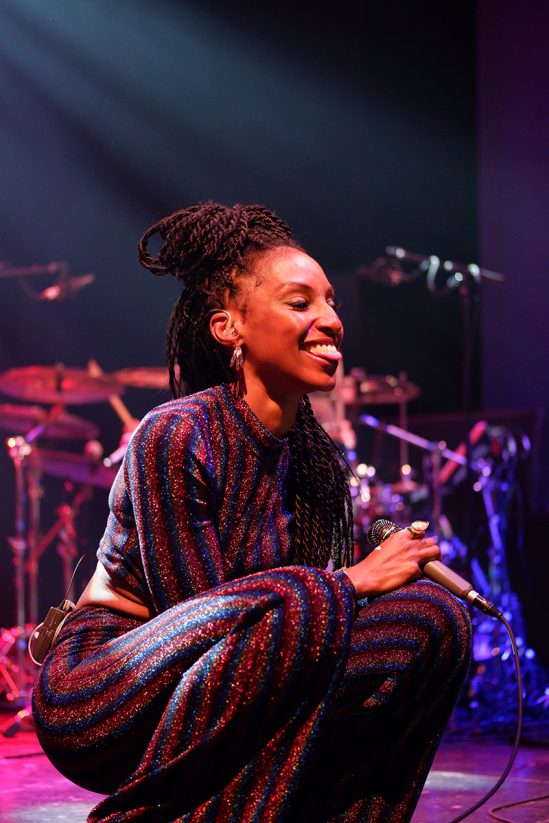 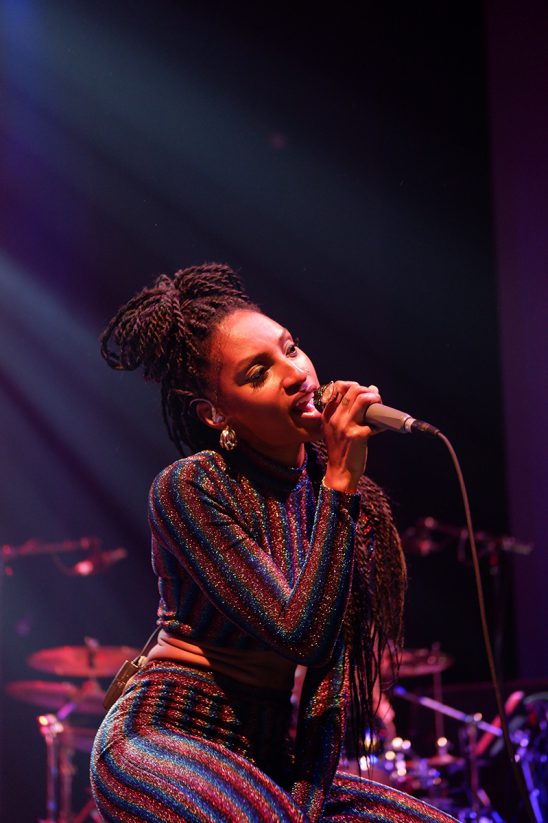 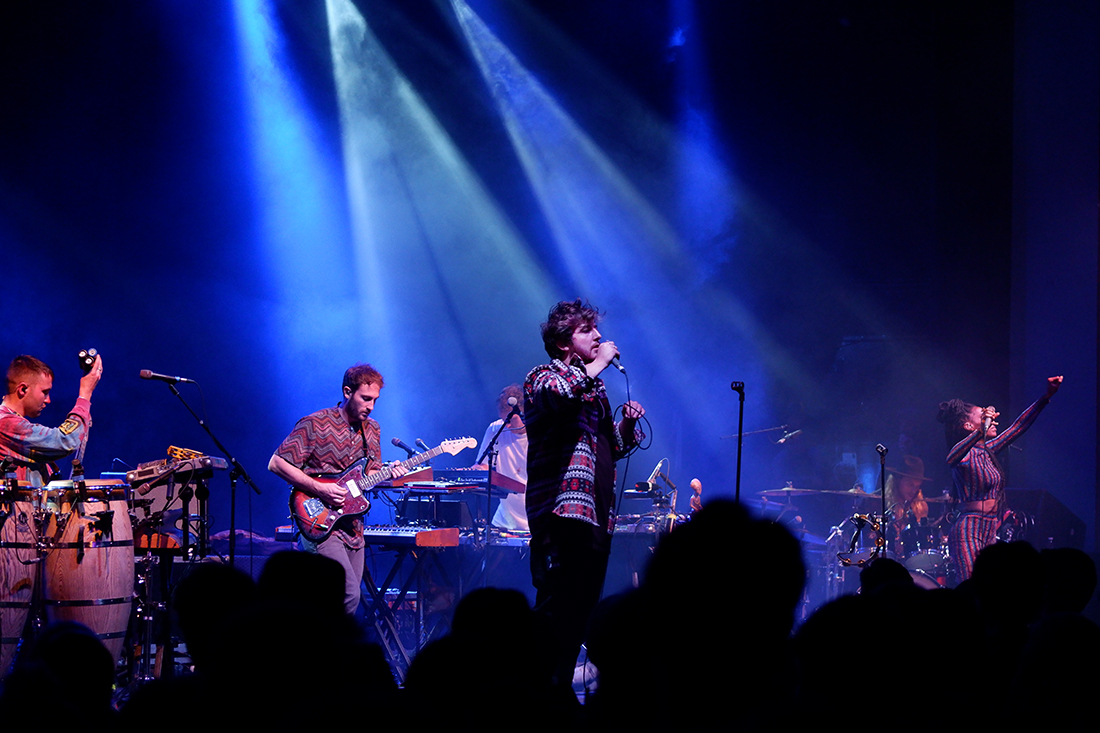 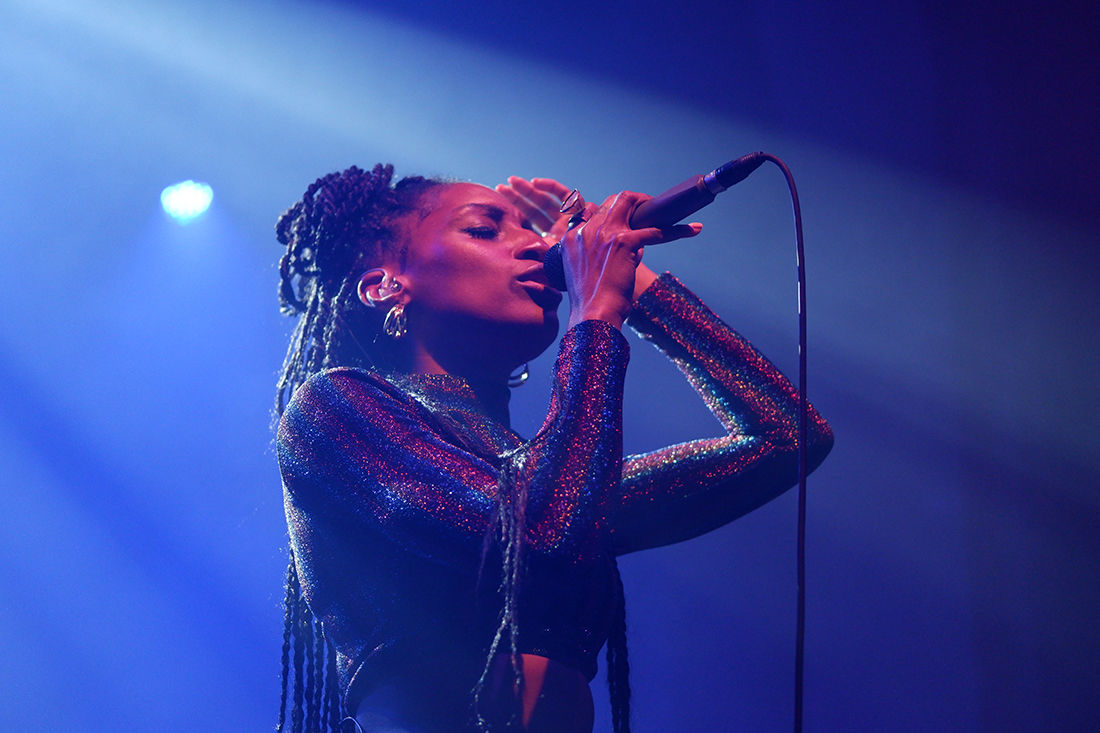