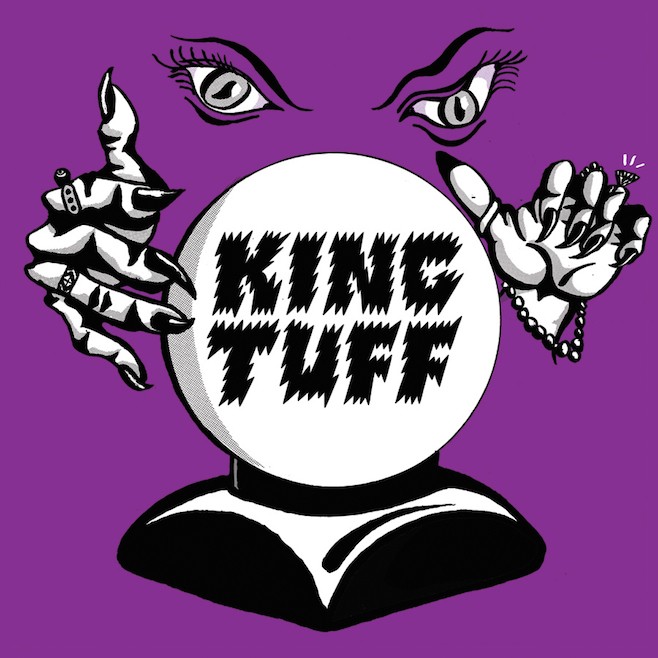 Kyle Thomas seems to be some sort of garage rock tycoon. He’s worked with J. Mascis and Ty Segall, he plays in four different bands (with focus right now on his band, King Tuff) and his first record is a collector’s item.  “Was Dead” was originally pressed through Burger Records and after the self-titled album came out, Sub Pop caught a whiff and picked him up immediately. I’m trying to give you a pre-cursor here; Kyle Thomas is impressive and not something to be looked over, even though he kind of has been in the past.

Black Moon Spell is a thundering, rumbling labor of love and it’s just in time for Halloween. Put on your witch’s hat and bust our your tarot cards. Kyle Thomas use’s his guitar to evoke your sexual demons. On the track “Sick Mind” he literally howls like a werewolf while crooning about a succubus whom he may be in love with. This record is asking you to hump, while probably pouring hot wax on one another. “Rainbows Run” is about making someone orgasm. This is rock n’ roll like how Black Sabbath and Led Zeppelin played rock n’ roll. The whole record is littered with ripping guitar solos and drums banged with urgency. King Tuff is not for the faint of heart. “Beautiful Thing” is an ode to band-aids (like Penny lane, man). “Black Moon Spell” is about blunts, babes, and the boogey man.  The track “Madness” sums it up pretty accurately with this verse; the rock n’ rolla/coco cola/makes me lose controla girls.

And it all kicks off with the title track, “Black Moon Spell” which features yet another lo-fi deity, Ty Segall. Remember how I told you to bust out the tarot cards? Well you might want to grab a chalice too because on the title track Thomas asks you to drink his witch’s brew. He also talks you on galactic ride in with “Staircase of Diamonds.” I love this whole record and I can’t stop playing it.

Bobby Harlow helped produced this album and did what he does best. Creates a big sound record without compromising the personality of the artist or stripping it of its true sound. Bobby isn’t afraid of lo-fi and along with Black Lips (separate but equal) has helped to create this genre. If King Tuff is a garage rock god, Bobby Harlow is out pastor. Deliver us from evil, Bobby.

Black Moon Spell is out September 23rd. I suggest you pick this nugget up, burn some sage and pay homage.