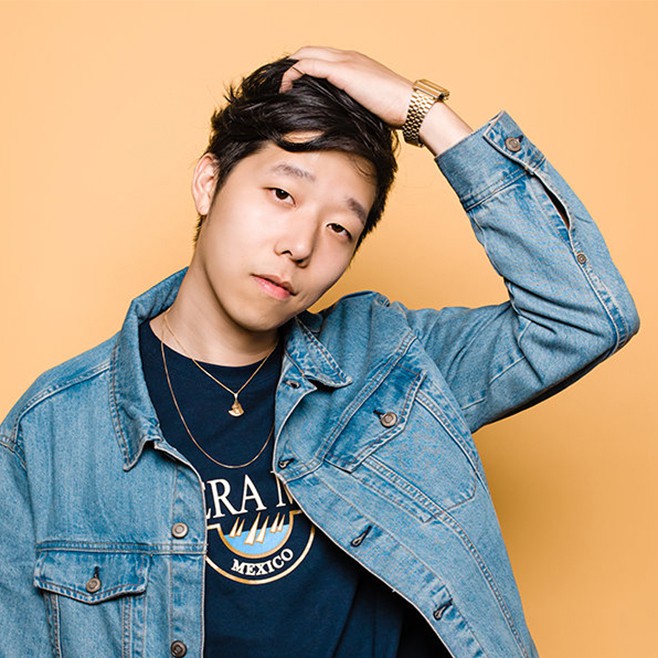 Last weekend, critically acclaimed up and coming artist Giraffage (Charlie Yin) took over the Velvet Underground in Toronto. Kicking of his first nationwide Too Real tour, with fellow artists Wingtip and Sweater Beats, Giraffage played his show with confidence and clear intent.

Fellow friend and DJ, Sweater Beats took the stage before Giraffage to get the party started. Other than announcing to the crowd that he was “Happy to be in Montreal”, his set was a hit. After realizing he was in Toronto (and apologizing to the forgiving crowd) he kept the vibes flowing. His songs were original, taking beats from classics like Outkast and Girl Talk, and he provided a variety of mixes from different genres and decades. Sweater Beats loosened up the young fans and set the mood for Giraffage to take the stage.

Originally from San Fransisco and with an education background in political economics, many would be surprised that Giraffage had decided to pursue a career in music. With something to prove and a lot to learn, he is certainly on a path to success. With his new album out Too Real, Giraffage is touring the nation and allowing his fans into his world. The album is a story of his life, with each song representing an experience he has had. For many, listening to music is therapy, but for Giraffage, writing and producing music about his life is his own therapy and a journey on which he is taking his fans along. His beats are unique, taking samples from 90’s R&B, pop, and some dreamy electronica.

Giraffage opened with a remix of  “Soulja Boy” maintaining the energy of the crowd then eventually got more personal and emotional with his original tracks. Yin played with more confidence than in the past, and it was comforting to see how loyal his fan base is. After two studio albums and touring with the likes of  DJ Porter Robinsion, Giraffage can confidently work a crowd and read exactly what room wants and likes. His show is as intimate as his album and with the addition of his drumming throughout he has enough originality and talent to set him apart from the rest.

Giraffage puts everything he is into his music and he has the drive to be successful and remain humble. This tour is just the beginning of his journey, but the road is endless and opportunities will continue to come for this artist. We look forward to seeing how far he takes it.