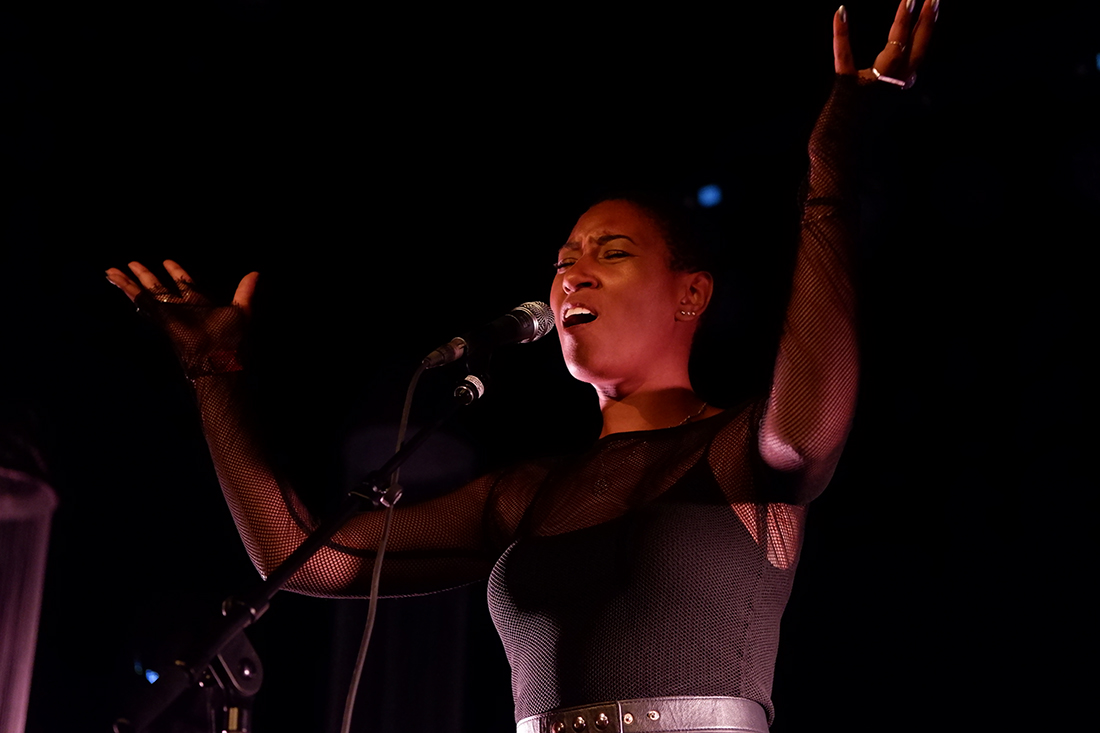 Scene Paramount theatre was dark, just a few sparse lights reflecting off the wine glasses set on the dressed tables. Some gentle glassware clinking could be heard from the back bar but the otherwise complete silence is exactly the environment Dominique Fils-Aimé is looking for. The performance began with the reading of “Rise” – a tribute to the poem Still I Rise, by Maya Angelou. By the stage, the standing crowd was breathing quietly, chills running down their spines.

Dominique Fils-Aimé is a singer-songwriter from Haiti, currently living in Montreal. Not too long after her performance at the Montreal Jazz Festival Dominique and I met for a chat in Rouyn-Noranda, prior to the above-mentioned performance at FME. The theatre was still closed, we sat in one of the booths at the front of the theatre, a room that would soon fill with diners and anxious concert attendees. Wearing all black with subtle silver accents, Fils-Aimé is friendly and well composed, radiating joy, and positivity.

“I was not in music at first, I was working in psychological support for employees and autistic kids two to four. And, I burnt out,” she admits. Music became her therapy, a meditating escape during which she could slowly create. “I realized that if it can heal me and make me feel better, it possibly can do the same for others. And I guess the turning point was when I did The Voice and realized that there was actually an interest from people.” Knowing that putting herself out there could bring back positivity, that people out there, including The Voice, found and appreciated her music was a motivation to keep going and pursue the life of an artist.

Fils-Aimé did not win The Voice, but as we approached that part of the conversation, she leaned over and whispered: “Not winning is winning” and smiled. “Because the contract is intense, but at the same time you get to take all the experience without the implications of what comes next, it’s a lot of attention, it’s very intense and I don’t think I would have been able to sustain that kind of attention right off. It’s too much pressure, too many eyes looking at you at once when you just discovered a new world. So, I was happy to dabble into it, learn a few things and then get to reflect and meditate at home for two years over what I really wanted to do, build my team, create a concept for my album and now I feel more comfortable in what I’m doing and ready for it, you know. Like I chose the timing for things rather than things just happened.” Having the time gave Dominique room to choose her own direction and create her own lane in a healthy way. “It’s exactly what I needed,” she continues, “It also allowed me to have a team that has the same vision as me when it comes to music. The goal is not to make a one-hit-wonder, for example, it’s really about building slowly but in a healthy way, all together and make the journey worth it.”

The goal has always been to make music that matters by taking the time to “meditate upon a message.” So far, Fils-Aimé is two releases deep: Nameless (2018) and Stay Tuned! (2019), both intentionally released in February, during Black History month, and as a way to break up the winter. Stay Tuned! gained her a Short List nomination for the prestigious Polaris Prize.

The themes in her music are not of a light, gentle nature, despite the smooth sound: “We try to tackle things that need to be addressed, you know, to talk about the things that really stood out to me when I started looking at the world we live in and the music – the kind of legacy it gives us. Black music has so many messages and so many underlying themes that are still current. Bringing them back to today’s reality felt like the right place for me to stand up for what I believe in without being too aggressive.”

“When I started looking into black history [I realized] that there’s a lot I didn’t learn in school, but whatever I didn’t know from school I had learned from the music.” During this discovery, Dominique saw a clear vision for a three-pillar album trilogy: “Each are linked to primary colors and to specific emotions, musical movements and historical times,” she explained. “You have the blues that is heavy, that is water, that is nighttime, that is slavery (Nameless). Then you had the red of jazz that came with the women, the blood, the fire that was inside the people craving change and setting fire – people were actually setting cities on fire,” she points out (Stay Tuned!). “And then once a few freedoms were acquired, you fell into a lighter type of music that was more generalized, like funk – they would talk about falling in love and partying, you know all these things that are more universal in a way. Just because they had a few freedoms and it was enough to celebrate even though we’re not done. So discovering that gave me a plan – it felt all laid out already. I was like, well there it is, those are the things I would like to explore and I would like to have as much time as possible to explore each of them because they’re all very heavy and complete in their history and they are my roots. This allowed me to dabble into all the different musical genres that raised me and make sure that I understood what I liked in each so I can create my own musical sound, influenced by each of them.”

Two out of the three releases are out and we are now waiting for the warmth. I asked if the next release is going to be yellow, and as her eyes lit up she responded with an excited and protracted yes: “It is going to be the sun… the joyful side of glittery disco and soul. I like the element of how deep soul music can connect and even when it’s talking about things like falling in love, it really goes to a deep place that kind of rings with the blues, in a way, so connecting all of them is going to be a perfect [end to the trilogy on] a happy note.” 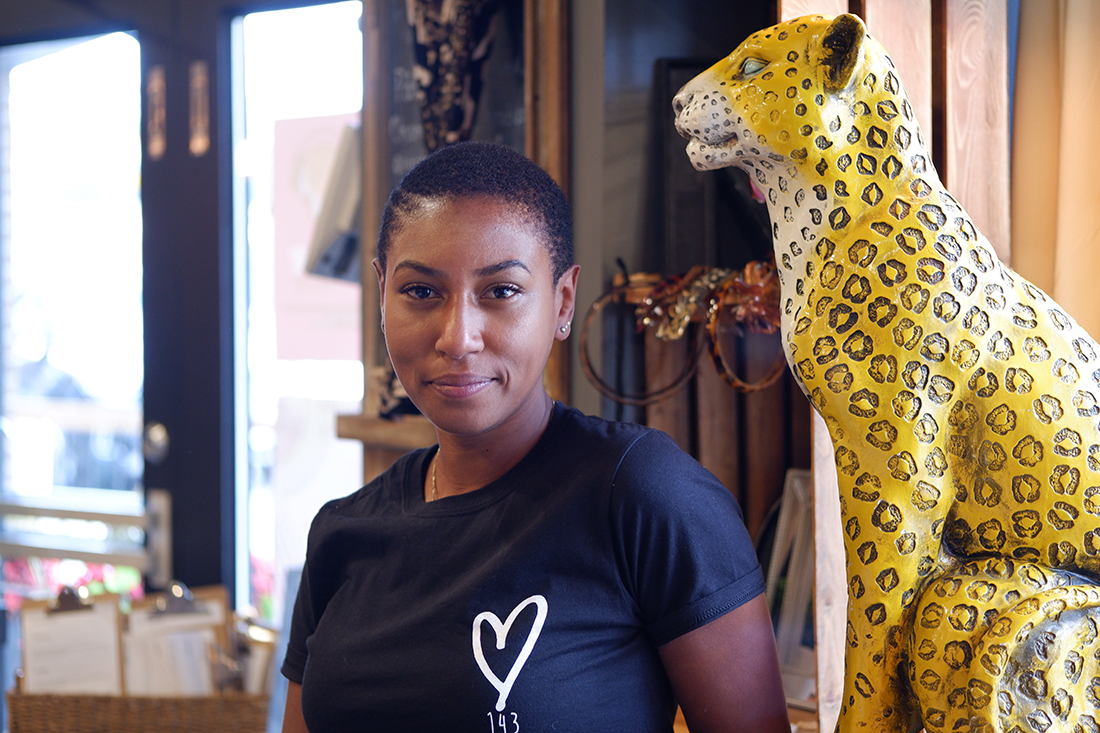 Dominique grew up in a home filled with music, and even though her sister was a performer, she didn’t see it as a potential career. Now, having dove into it, gently but head first, Fils-Aimé is enjoying the slow and steady discovery of her musical self. “It’s a lot of training…a lot of hours going Oooa oooa, oooa oooa at home,” she laughs again, “it’s like meditation.” After sunset is clearly her favorite time to create, “The whole city is sleeping, everything’s quiet, so it’s perfect time to record your ideas and it’s also a perfect time to take it wherever you want not being worried someone can hear me going in my random places, you know? ‘Cause you can feel a bit shy sometimes, in the creative process. So nighttime is the right time.” She laughed at her own pun.

That shyness she speaks off has also been something to breakthrough when it comes to performing live: “I learned to love playing live,” Dominique reflected slightly whispering: “I’m not a big fan of shows but I’m learning to create a show that I like. So now I’m becoming a fan because I allowed myself to create a space that I felt comfortable in. At first, I didn’t like doing shows [but that’s because] I don’t like doing shows like everyone else does… So we created a safe space in a way whereas the people enter the bubble we ask them to hold the applause until the end so they can really sink in the music. Doesn’t always work but it’s okay,” she smiled.

She began her FME performance just the same – asking the people to hold the applause till the end of the show, to which the crowd immediately responded with applause. But as the show went on, the audience learned to stay still and quiet, letting the music wash over them. “Having people think about the preconceived notions that we establish socially to me as a win already and doing it in the show in such a gentle way, it’s not aggressive, it’s pretty peaceful, but it still put a little seed to grow. Like food for thought really, for after they leave the show,” she commented on breaking the traditional concert watching behavior.

In the past, Dominique spoke about the lack of women in the music industry, within bands in particular, and how it has been a challenge to add more women to her band so we circled back to that topic. “When I look around in all the bands, it’s still a struggle, but at least it’s a struggle we talk about now and that people are actually doing active steps, even I had to do the actual step of being like, ‘Hey, wait a second, let me look around. Maybe I could make a few changes,’ you know. It’s hard and it hurts a few people along the way, but for a good cause and eventually, everybody gets over it and realizes that it was not about them as a person. It was about respecting the integrity of your artistic thought and process and the things we want to change.” Commenting on the “boys-club” reality of the music industry she insisted that like all change it needs to be done one step at a time, for example by “getting people to not be scared to enter a room that is not necessarily welcoming to them, [because] eventually by being there it will make it less strange for people to see them there.”

In some way, making the room has been her own personal struggle: “Learning to… trust myself and to believe in myself,” she admits, “without thinking that it [could be seen as] cocky….Sometimes you feel like [that] doesn’t even exist: you’re either cocky or you’re humble, but you can be confident and just know what you stand for and feel comfortable in your skin. And that’s something that transpires, I think, something people can connect with. The struggle is not over and let’s face it, it’s probably going to be a lifetime struggle, but realizing that having that moment where you realize, Okay, yes I’m different. Yes, I am not necessarily what people are used to seeing or hearing but I am allowed to do this and I’m allowed to feel welcome.” Admittedly like many women I could relate to the feeling, we both pondered about it, that feeling of self-doubt, and how it seems to be a girl thing.

At the end of the day, however, for Dominique Fils-Aimé every day is a highlight that presents a new challenge, “this whole year was nothing but highlights and people have been supporting and encouraging.” That upbeat, positive attitude, immense natural talent, and lady-like conduct makes her an artist to watch. Stay tuned for the closing album coming next year. 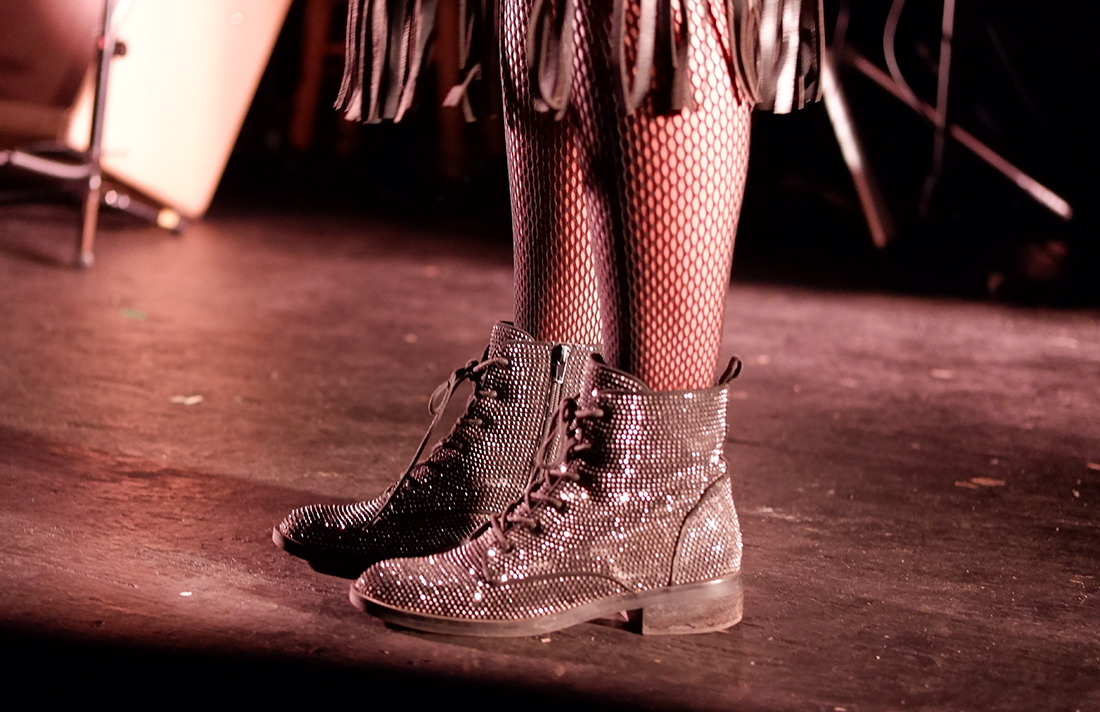