As any biopic will show, no artistic journey follows a succinct A-to-B, forward progression.  Hypothetically, it could involve starting by studying painting in Boston to freestyling rap with a friend in Venice, Italy, to self-releasing a Gorillaz-esque hip hop album before finding your way to the midwest, now making acoustic folk. Purely hypothetical, of course, unless you’re Chicago-based indie darling Color For Colors, in which case this is pure history.

History, thematically, is Color For Color’s bread and butter, and, while hip-hop to folk may seem like an odd jump, the artist otherwise known as Ollie Hobson (this group name comes from his visual arts background and the rhythmic, comedic quality of three recognizable words put together nonsensically) easily justifies it, as both require little entry-level equipment, making them more accessible to both makers and partakers. His motivational question is always “What can I execute to make more melodic music?” allowing the lyrics and emotional journey to carry the day, with the extra bells and whistles joining in down the line.

Color For Colors is fresh off of the success of Heartache, a beautifully stylized and hypnotic album, which chronicles a time of familial loss. Originally intended as a five-track album, each song portraying one of the five stages of grief, the project just kept growing and, as often happens when processing loss, there always felt like there was more to say. The impetus for the album was the leading track “Courtyard,” a song Hobson always meant to write for his sister, which, in the end, became eleven pieces dedicated to her memory. Hobson’s poetry shines on the album with lines such as “Even the luckiest people, when they survive, eulogize someday” and “I was crying in the courtyard, and you’re never gonna know” pulsing with the beauty of heartbreak and words unspoken.

Counting The Beatles and Why? as influences, it’s no wonder how Color For Colors is so masterful at approachable melodies, clever vocal turns, and haunting emotional manipulation (the good kind). “I’m a melancholy person. I write better in that space” Hobson says with a smile, detailing that revisiting this album’s muse often meant “having to confront Sophie directly”, which, while cathartic, put a lot of pressure on getting the album emotionally right. Although the stakes are different, this isn’t the first time Hobson’s melancholy ways have stood front and center– his second EP, 2010’s “The Misadventures of Phthalo Blue” faced off against his own angst and loneliness, once again showing the power of his lyrics and emotional depth. Songs “Four Birds” (“you may be miles away from breaking, but I can see it in your eyes”) and “Crashing Planes” (“if the engines didn’t die/if the wings were safe to fly/fly away/just not today”) prove that, while these are certainly different battles, Color For Color’s war of the heart always remains the same.

The heart meets the brain in Hobson’s creative process, as he considers himself both a natural procrastinator and a perfectionist, leading him to personally edit the bass and drum tracks of “Heartache” until they were exactly where he needed them. “Nothing will make you hate your music more than listening to the same rhythms thousands of times,” he says with a laugh. With all of the money and time and heartbreak that goes into making an album, however, he says, “there was no way I was going to let this not be something I loved.” Not only are the drums and bass perfect, but melodies and lyrics beautifully reappear throughout the album, linking tracks together into one thematic whirlwind, and once-discarded songs, repurposed as interstitials, add to the emotional and personal fuzz that is grief.

The care that Color For Colors puts into his music is evident in the packaged, fully-realized-vision work that he releases, but, in his latest project, these strengths are intentionally challenged. “Out There in the Road” is part of the “Song in a Day” Program, a device by Chicago’s Ersatz Record Co. which bought a fictional recording studio with a backlog going back to “the history of recorded sound” and is now releasing these forgotten hits, all inspired by famous songwriters from yesteryear. Hobson plays a character named Cyrus Beargan, a tribute to Leonard Cohen. “Everyone knows him as this low voice guy, so I think that’s as far as our similarities go” Hobson jokes, downplaying the likenesses in their emotional, lyrical powers. The finished product, a perfect Cohen homage (and a catchy tune in its own right), was mostly put together in one session and includes everything lovely about Color For Colors’ other discography, in addition to the added wow factor resulting from meeting a tight deadline.

“Normally I’m at home, and I can do a million takes,” Hobson describes, but the project’s conceit often meant he had twenty minutes to figure out both lyrics and tone. Much of the song’s origin came from the “first chord progression I could think of” and then trusting his instincts, which is not always easy. “Deep down, for the next month, I was like ‘when could I come in and redo that,’” he jokes. The successful outcome of the song, however, proves that Hobson’s “natural procrastinator” tendencies can lead to new levels of his artistic journey. As he explains, sometimes it’s hard to stay in the moment when you’re focused only on a result and such extreme pressure often allows you to articulate things you may otherwise be unable to. 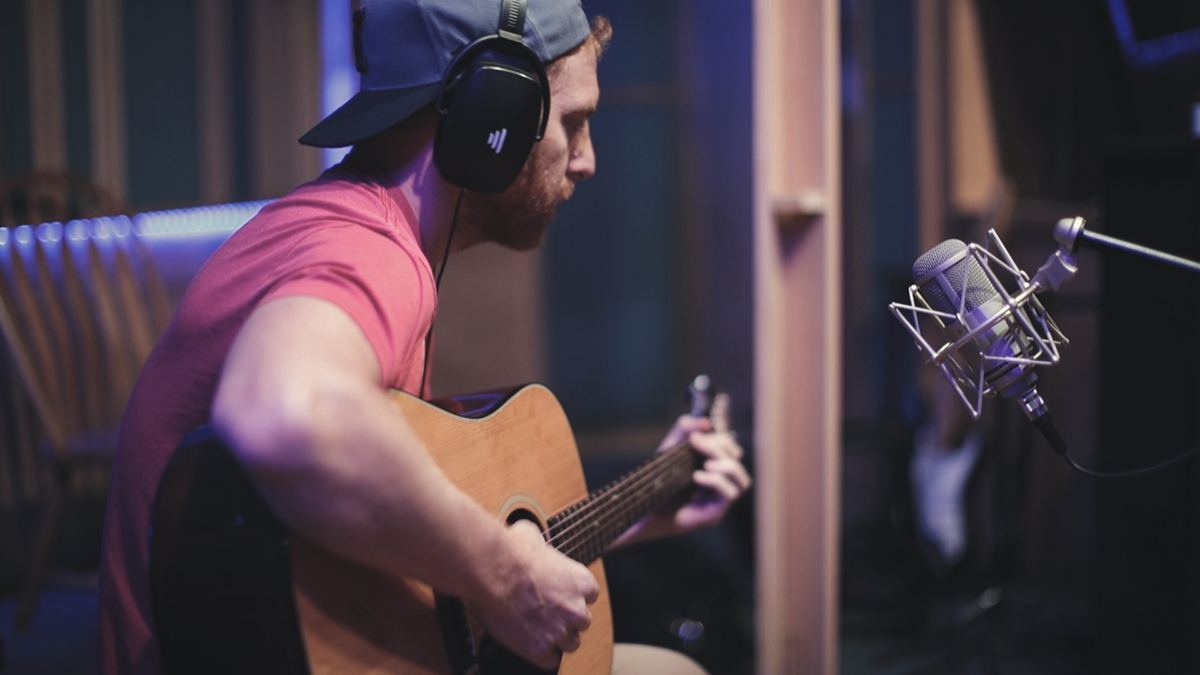 Color For Colors’ flexibility in trying anything once may be his greatest strength as an artist. More than anything, being an independent musician relies on constantly creating and changing the ways you work. It’s by no means an easy journey, and, more than once, Hobson has found himself against the ropes of the industry. He admits to feeling dejected after the release of his previous EPs, knowing “the return is not what it could be”, as who wouldn’t hope for a top-of-the-charts blockbuster album. Living his whole life around various artistic disciplines, he’s aware that “there’s so much good art in the world that it gets lost. You don’t know where to look because it’s everywhere”, a double-edged sword in the DIY world we live in today. It’s fulfilling yet exhausting to constantly throw water at an over-full bucket.

With “Heartache”, Hobson admits, “I did what I wanted to do” and has kept every piece of positive feedback, focusing especially on listeners also experiencing loss who found empathetic closure through it. This success-so-defined is enough to keep him in the ring. He finds motivation to keep creating by simply “remember[ing] what these people thought about it”. Just as part of grief is those left behind who must continue to live, part of artistry is just continuing to create and giving words to the emotions that must come out. We can only hope, to borrow Color For Colors’ beautiful lyricism, that this is enough to save us “from all of the heartaches”. It often is.