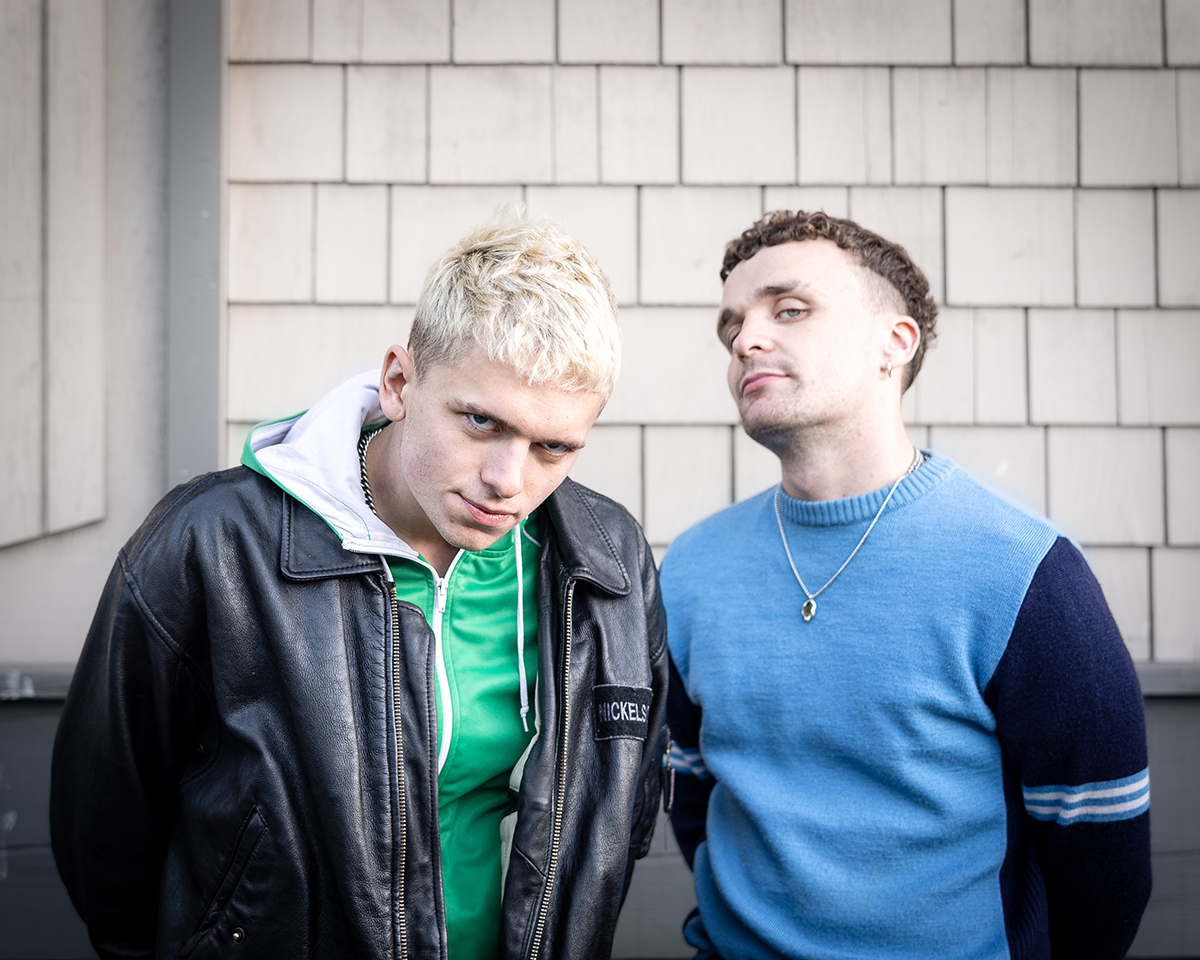 An anarchic possibly drunk British man points at his keyboardist, far off on at Portola‘s stage left.

“This one right here went and fucked me sister!!”

The crowd jeers in tandem and the poor musician in question cross his throat with a hand signaling for a subject change.

I’m not sure if it’s sweet but it’s pretty in line for a Sad Night Dynamite show. These two kids are chaos incarnate, it’s like if Damon Albarn went full mitosis and straight-up duplicated; two musicians that clearly have more electricity in their bodies than normal. Josh Greacen and Archie Blagden are the team, you perhaps know them for their shadow hit “Krunk”, a funk-adjacent downtempo bop that tends to evoke a crowd and then some.

From the critics, you’ll be hearing the Gorillaz comparisons ad infinitum, with refrains exploiting that lazy, self-aware, catchy croons we’ve so come accustomed to. Early SND stuff is more cryptic, however, with slinky top-end tranced out over cryptic vocals. The track “Icy Violence” is timeless in that regard. It’s like walking alone in Silent Hill during crepuscular hours. Even the soft ballad-esque songs still retain an unease, a fervor waiting to explode given the right tick.

Josh and Archie’s hunger hasn’t subsided over the years. They still make crowds beat each other up. They still sing their hooks through what sounds like a dilapidated tank speakerphone. But they keep a cool, crass demeanor in the midst of a context change. Sad Night Dynamite songs are generally on the slower side, but demand folks to rage anyway. I didn’t know you could do that.

Their last festival of the year was Portola but kept bouncing around well after the conclusion of San Francisco’s hullabaloo. QUIP was lucky enough to intercept them on the circuit and interrogate some info out of them before they left the States.

Josh Greacen: Life is crazy. It’s a roller coaster of things. But it’s all enjoyable. We don’t have a second to be bored. It’s a good way to be living.

AB: First time in the states?

JG: We’ve been here with Glass Animals. We had a headline tour a few months ago.

AB: The scene in London is so pristine. Boiler Room, RA, the underground. We exaggerate it in the states, but it’s an environment that seems so creative.

JG: It’s funny though, we fetishize the American scene. No matter where you are, you want what you don’t have.

AB: The grass is greener for sure, and your grass just hits different. Artists there, they’re built different.

JG: Especially now it’s getting stronger. There were a couple of years where I was like “fuck the UK scene”. Now there’s people doing cool shit.

AB: Your music in particular is suited for that underground, seedy shit. Like loitering at 2 am, and hearing you guys going crazy

JG: They need to put us on later. We should be on at midnight. We’re not a daylight kind of band. Those are the venues we still like to play. Like I said, it’s a mixture. Our headline in London we were playing to 1500. For us to get that many people in the room is mad. But the other venues are intimate.

ARB: I thought when I was a kid I wanted that, y’know? I’m living the dream. But I didn’t enjoy it. Well, I found it funny. I was looking at Josh like “Yo look look”. He missed the whole thing. Shout out to that girl.

JG: Yeah no we love her.

AB: Let’s throw it back. When you guys were just unknown making beats in London. What’s the low down there?

JG: It was Somerset at first, which is the countryside. We moved to London after finishing the first mixtape. And the goal was… to… hmm

AB: What was the goal?

JG: … To disrupt the apple cart of what we were hearing. Like, everywhere. It seemed blindingly obvious what was missing from the world. In terms of music. And it wasn’t, particularly like we were resenting the week. We were just listening to music that was old and being like “why isn’t this being re-imagined?”

JG: It varies. Totally depends. There’s so many. You see all these amazing artists and… It’s kind of luck that you have the right influences at the right time. And they mesh together. That first mixtape was the perfect mesh of influences.

ARB: The specials, particularly their one song “Ghost Town”. That song… so many parts to it. And then like josh said, American hip hop and old bands like The Clash. Fuckin’ just throw ‘em all together.

JG: What are we listening to now? It all changes. A ton of Timbaland. Who else..?

ARB: There’s an English duo called Jockstrap who are very, very good. BCNR adjacent. But like older music… even some cinema scores there. I feel like once you got a reference of when you put out a piece of music and you tryna discover a sound. Once you discover even a little bit, you kind of reference your own stuff. You identify yourself through the music of others.

JG: Okay okay I found some. It’s a weird mix. Black Star. The new Deadmau5. MF Doom, rest in peace. Weyes Blood. There was a very special time before we released any music when we were totally obsessed with the Specials, the Clash, and the Gorillas. to the degree where it was like… It was so obvious what we needed to do. And we didn’t have any outside influence.

ARB: It was just me and josh in the countryside, also kind of inspired by the scene around us. We’d be writing these songs late at night and it’d be just the woods and stuff

AB: Is that where the name came from?

ARB: No, josh came up with it. I don’t know why. He was reading a book.

JG: I was just reading a book. There is the word dynamite. And I just added it and said it to Archie, and he went that’s the shittest name I’ve ever heard.

AB: Yet here we are

AB: It’s funny you mentioned Gorillaz cause in your song Krunk, you probably hear this all the time, the refrain is so Damon Albarn. It’s insane.

JG: We met him a couple of times and he even put us on his playlist. His music is fucking godly.

JG: We’ll happily take influence from him. As long as he doesn’t mind.

AB: I saw them play live just two days ago, and all the ingredients were there. They closed with some weird garage house remix of Clint Eastwood.

ARB: Yeah! That’s the one that blew up in the UK. Huge. That was the original, how Gorillaz became big at first over there, it was that remix.

Support Sad Night Dynamite over at their site here or stream them on all available digital service providers.