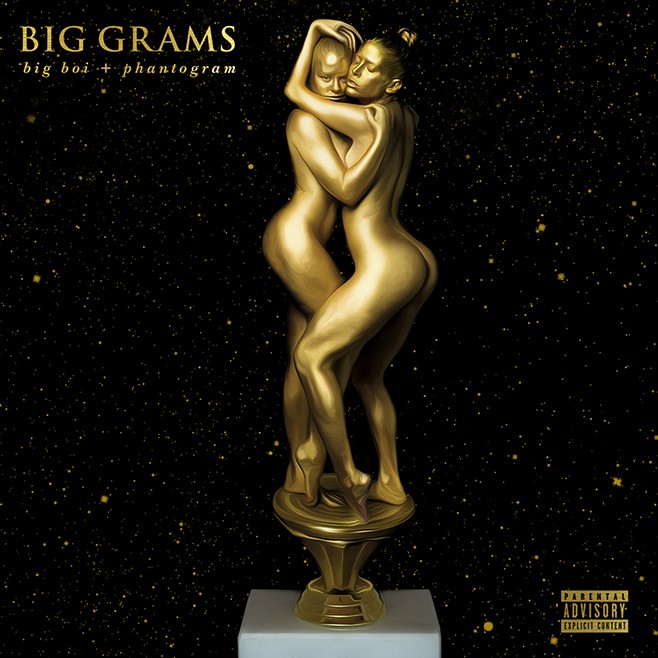 One of the first thoughts that comes to mind when hearing Phantogram for the first time is, “These would be great beats for someone to rap over.” The lead singer’s voice is made for hooks, the drums are always steady, and the songs have a kind of swagger that is rare for an introspective group like Phantogram.

Therefore it’s no surprise that Big Grams doesn’t sound like a departure at all from their regular output, but rather it fits right in. The surprise is that Big Boi also thought the beats were made for rhymes, and realized the opportunity to use the band’s unique style to showcase his still-impressive lyrics. Even more surprising, as the legend goes, is that he only heard Phantogram thanks to a pop-up ad while he was surfing the net.

Fortuitous advertising aside, Big Boi looked them up, one assumes they leapt at the chance, and now there is a stellar 7-song EP to show for it. Thanks to Daddy Fat Sax’s outsized cultural footprint, they were also able to rope in Run the Jewels and Skrillex for help on two separate tracks.

Maybe part of what attracted Big Boi to this project was seeing what his old pal Killer Mike was accomplishing alongside El-P’s unorthodox hip hop beats in Run the Jewels. But whatever the reason, hearing those two grizzled veterans of Atlanta hip hop together again over modern beats makes this listener feel all fuzzy inside.

The first single released will apparently be “Fell in the Sun,” but “Goldmine Junkie” stands out as the best microcosm of the collaboration, as Big Boi sings along with them – “no matter what I do to break your heart I hope you’ll always love me.” Now, if he would have chosen to link up with Limp Bizkit, listeners might have ceased to love him. However, the only hearts he is breaking with Phantogram belong to the haters.