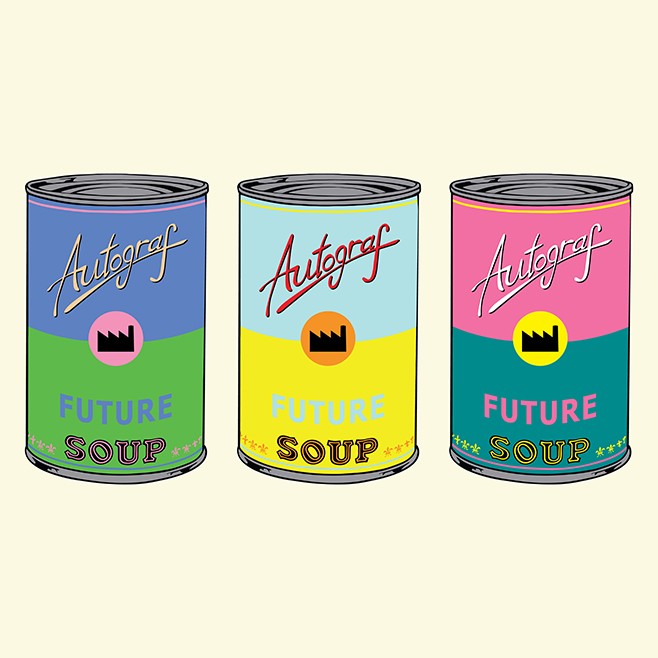 Chicago-based trio Autograf are attempting to transform the landscape (quite literally) of traditional house music. The group’s chill vibes converge with installation art pieces on display during their performances, making for a stage spectacle that’s inventive and captivating.

They are also pretty intent on starting a movement for fans to #leaveyourautograf – encouraging listeners to create their own art and narratives using their music as an inspiration and jumping-off point. The band made an impact with “Metaphysical” (featuring Chicago-burb native and Lollapalooza 2015 act Janelle Kroll), hot on the heels of their SoundCloud success found in remixing tracks from artists like Stevie Wonder, Lorde and Pharrell.

The band, former art students themselves, are releasing their new EP Future Soup on March 11, 2016. The cover art is an obvious nod to Warhol transforming art into music. The new EP arguably picks up where “Metaphysical” kicked off with the first track, but the rest of the EP is less focused on vocals and more on establishing the scene with tropically-inflected instrumentals. There’s a fair amount of marimba throughout, contrasting softer piano with a distinct “island” vibe, inspired specifically by Brazil.

“Future Soup” opens the EP and with it the listener can easily get into the subtle grooves and how they fold into the vocal overlay. The vocals also give the track more shape; this is the hardest-driving song of the set, which isn’t to say too hard, but it still stands out as the club jam of the group.  “Heartbeat” stands up as the standard club jam, their latest single release off of the EP. For a band centered on delivering plenty of love and vibes, this track delivers. Next track, “Slow Burn,” is a bit of a departure from the first two, more of a slow groove, more ambient, still pulses – house music for a more grown-up set, a little soft piano never hurt anyone, rounded out smooth jazzy saxophone that’s welcome on the stereo of a party that’s settling in for the evening.

Taking the chill notes further “Horizons” is inflected with a minimal trance beat. It is minimal, yet still really pleasing, with a dash of synth, it creates a relaxed vibe with a smooth build toward the end. The record comes to a close with “Ocean Glass”, a tune with a slow start accompanied by soft piano, the sort of music you want to have on person when gazing out across a panoramic vista. As it moves forward, more marimba is played in, further decorating the plush soundscape with the delicate tropical touches.

Overall, Future Soup is simple enough house-inspired music with tropical hints, but what the band is setting out to do with its integrated take on art and performance mixed with the house genre makes it a doubly intriguing listen. Autograf takes what can be a heady, less approachable concept and smooths it out with mellow sounds that amount to more in the actions of the listener.