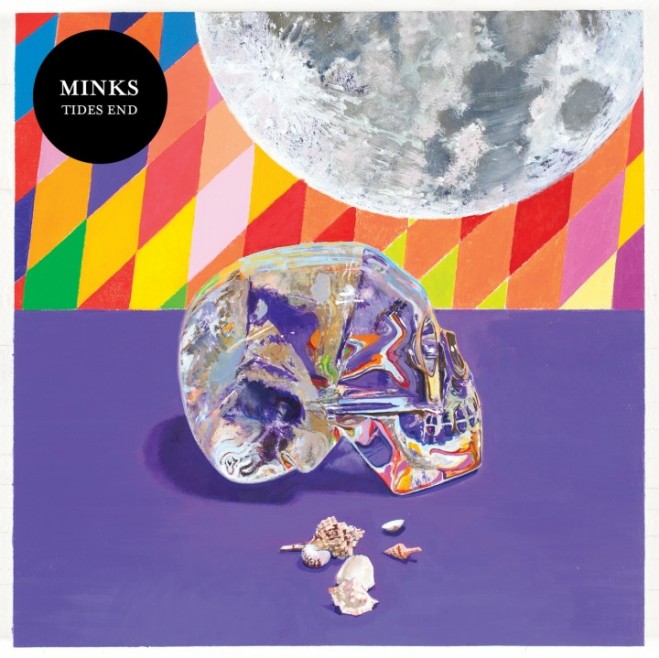 MINKS is the band Robert Smith would have formed if he hadn’t been so goddamn sad.

The indie-pop synth group has released their second LP with Captured Tracks. Tides End immediately evokes visions and feelings of summer, and the more one listens, the more that becomes apparent. The album can also be considered either a youth anthem or a dust cloud of nostalgia. Either way they have a decent command of the indie pop synth sound and have only brightened it since their fist L.P.

The entire album imparts the sensation of Valium washed down with fizzy lemonade. The guitar plays three roles with the MINKS: it opens their song with lazy, languid strokes, pulls the song along in the fashion of a New Order tune, or fills in gaps of silence. The guitar is the nucleus of the MINKS atom but the omnipresent synth beats are what force you to dance. The synth is what takes the  for sappy indie to hipster dance party.

Some of the lyrics can be a touch trite, such as in “Doomed and Cool”: “Do you think he’s cute/do you think she’s jealous/ are you going out tonight.” Lyrics shouldn’t sound like just anyone could have written them. “Weekenders” could be all together cut from the album. It does nothing for the depth of the band.

The crown jewel of the album is the effervescent “Painted Indian”. This is definitely the single of the album and sure to be the summer anthem for many a pill popping, PBR chugging kiddo. It’s an instant sing along with “From black to white to red to white and back to red.” It also screams heavily to the theme of the album with lyrics like “Sweet hopeless kids out running crazy/ setting fire to buildings while the schools are out.”  It reminds me of one fourth of July when my housemates and I set fire to some old furniture we had put on the lawn and become moldy from the monsoons we’d received. With that said on your next sunny day spike your lemonade, snort your prescription, and turn up “Painted Indian”.