This past weekend marked the unofficial 10th anniversary of Pitchfork Music Festival. The media company’s choice of commemoration was to have two Chicago natives open and close the festival. While this may not seem as grand a gesture as You Pick the Set list of Don’t Look Back (projects put on in previous years). The two headliners represented some of the most important aspects of Pitchfork media; raw talent, unrelenting work and rarity. And I do believe that there was a little collusion between Wilco headlining on Friday and the decision to debut their album the day before.

Friday was kicked off for me with Mac Demarco. I first saw Mac play about two years ago and what originally drew me to his music was his hilarity. He definitely still has the frivolity that makes him Mac Demarco but there is more seriousness to his work. He’s becoming an accomplished musician. He is also a breath of fresh air in this era of mundane, factory created pop music. Right before ripping into Viceroy, the song that first gained him attention he said, “ My new albums out and go ahead and download, and I don’t give a shit.” For Mac it is still solely about making truly great and interesting music. Next on my agenda was Chvrches; Lauren Mayberry was looking adorable as ever with a halo of jewels around her eyes. She made a few jabs about the heat but was able to emit great energy and keep the crowd moving.

The closer of the evening was Wilco. The day before they had dropped a new album. I suspect that this revealing of a new album was planned at least in part by Pitchfork. Pitchfork has always been a projector of the underdog and has definitely made some ballsy moves promotionally speaking and I have to say it’s pretty ballsy to debut a brand new album the day before a festival. The name of the album by the way is Star Wars and it’s great. During their set, heat lighting penetrated the clouds and it was just so wonderfully Midwestern. Wilco was a very deliberate choice. It was a way for Pitchfork to remind their readers, they are still the same people they’ve been from the beginning. Music journalists striving their best to bring you true talent in all its forms. 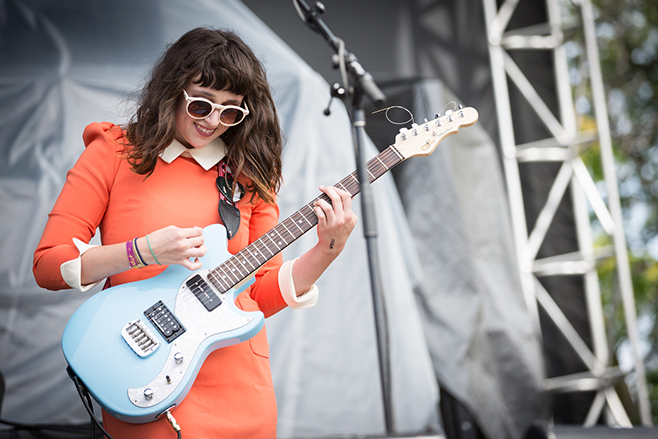 Saturday had a bit of a rocky start. It was supposed to rain the day before and that just intensified the humidity. It was unbearably hot. While trying to quench our thirst between 312’s and water we waited for Ex Hex to take the stage. It had started to rain but the ladies came out anyways. Unfortunately the storm got the best of Ex Hex. Lighting began to strike and Pitchfork actually had to close down. They began to evacuate the festival but not even an hour later, thankfully they reopened. It was a bit of a bummer for the Ex Hex fans but hey, the show must go on right? The next band I’m going to give reverence to is Parquet Courts. They actually have more albums than people give them credit for. They’ve done a lot of compilations and a live record at Third Man Records. Their playing was impressive and noisy and just continued to intensify as their set progressed. They were also the only set I saw that had original visuals projected onto the screen. A sort of overlapping of their own distorted images. New Pornographers followed. Absolutely killer set, they remind me of Broken Social Scene in a lot of ways. A troop of talented soloists who come together. I guess they do have a lot more structure than BSS though. It was a bummer that Dan Bejar and Neko Case couldn’t make it but the girl who stood in for Neko sounded eerie similar and Newman did a great job leading the band. The played an array of hits from multiple albums and their sound was impeccable. 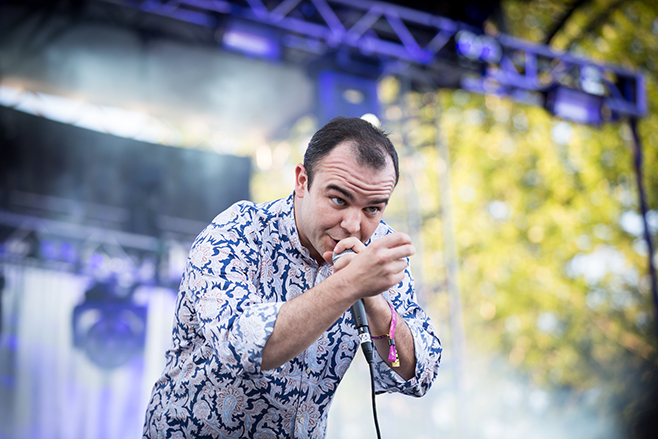 Future Islands also played on Saturday but I never got on that train. Also every single song required a preamble from their front man, which I feel is something less talented musicians tend to do because their music isn’t good enough to speak for itself.

The last set of the day was also one of my personal favorites. Sleater Kinney sent the crowd into an incredible frenzy with long low howls from Corwin and battle-axe guitar holds by Carrie. (Along with three different telecaster switch ups.) Right before going into “No Cities to Love” Carrie let the crowd know that this song is NOT about Chicago. She also dedicated New Wave to Tina Belcher. Those girls know their demographic well. During one song Carrie flips the crowd off and throws down her microphone knowing full well she has a second verse coming up. She’s still a Riot Grrl at heart! She also reminds the crowd that their music isn’t pretty and it’s not meant to be. It’s about getting the ugliness out.  Girls all around me are screaming for SK like our mother’s screamed for the Beatles. I love every minute of it and I feel totally united with all my sisters in our quest to overthrow the Patriarch. For the encore the came out and gave us a choice between “Your No Rock” and “Roll Fun and Little Babies”. Of course, they gave us both, in fact they gave us everything.

More images from the festival can be found here. 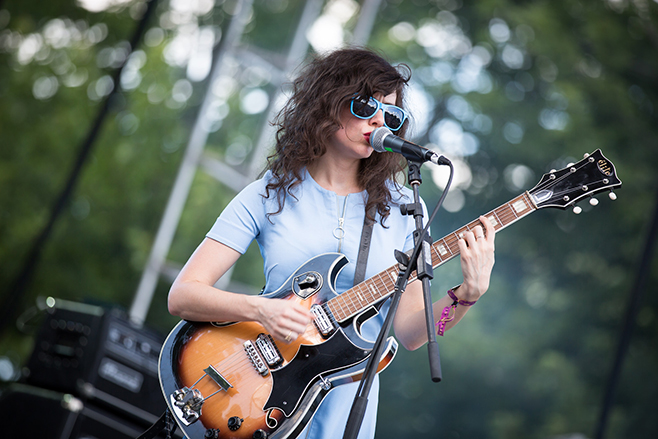