Pitchfork Sunday was an emotional day. For the big start Sky Ferreira had an emotional breakdown right in the middle of the show: there she was, singing her song, someone in the audience threw a bikini top on stage, holding it tightly with her hands she explains: “These songs just got a lot more real, you guys” and down came the waterworks.

Who else cried? Killer Mike dedicated a song to a fellow community organizer and when R. Kelly played “I believe I can fly” from the Space Jam soundtrack (Warner Bros. 1996) many in the audience had smoke in their eyes. But not everyone was in tears. Concertgoers dub Sunday as the “hip hop day” and it is also the busiest day and only one to sell out before the gates open. DJ Rashad started the festival with all his buddies hanging out on stage, dancing, smoking, drinking, having an infectious good time that spread to the solid mass of people in front of him.

El-P and Killer Mike also joined fores to make a beer with 312 brewing. By Killer Mike’s request (he doesn’t drink) the brew was made to taste like weed (which it didn’t). Not a huge surprise there, it came together into a pretty terrible concoction. 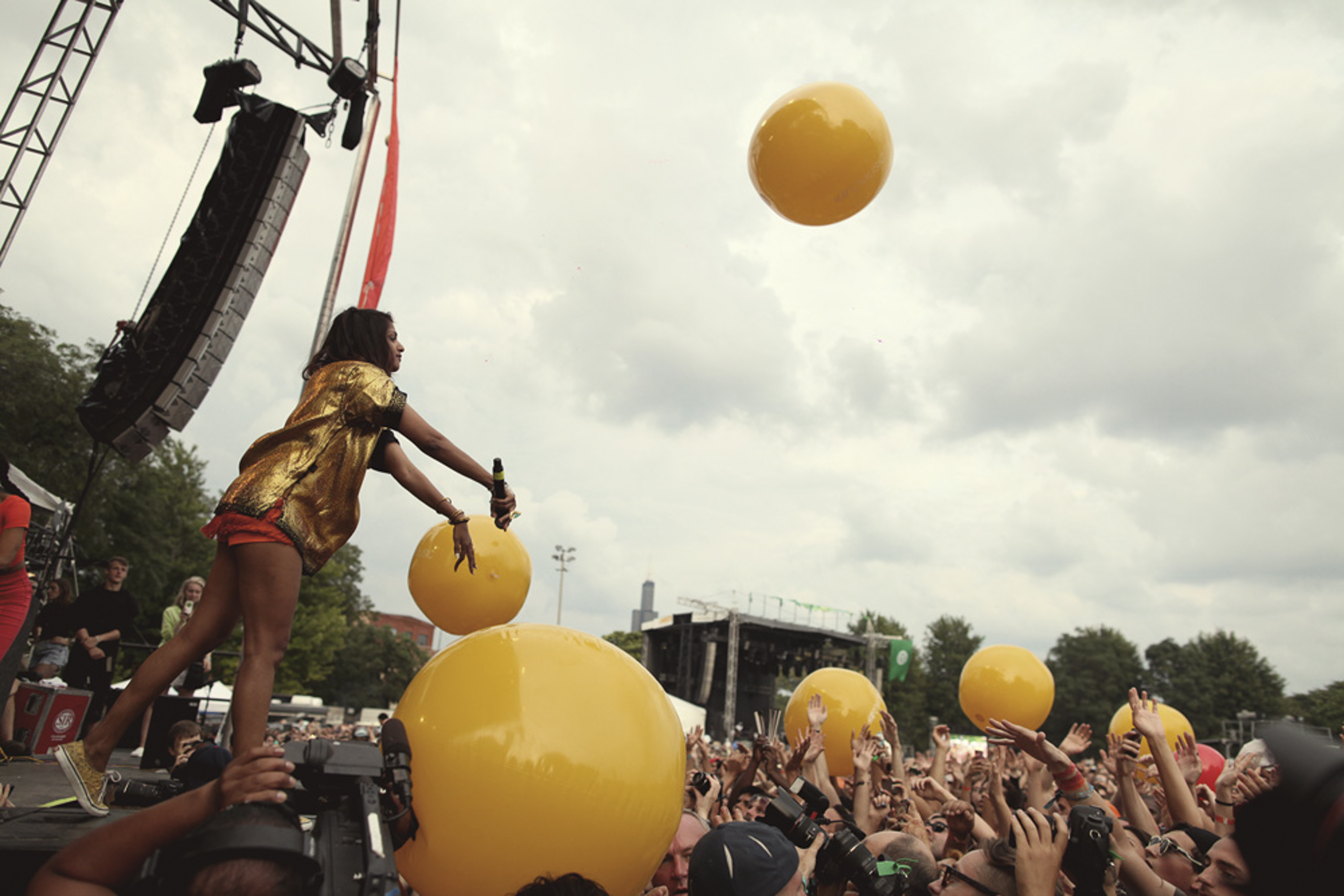 As if the tears were not enough the day saw a few technical errors too. MIA’s set was nearly ruined when her mic broke. It’s hard to say if it was ever really fixed because much of the show sounded pre-recorded. But no one seemed to care, the heat and pressure of 10,000 dancing feet stomped that dark Illinois soil into solid marble regardless of the disappointing sound.

Something has to be said about Lil B’s show – to-date some of the most insane stage dives ever happened during his set, with people doing running front flips over the security barricade and into the crowd. Lil B did the show solo without even a DJ to back him up, singing a little off beat to the computerized tracks someone off stage was piping over the speakers.

R. Kelly, King of R&B, shut down Pitchfork playing the kind of show that almost certainly fosters some unplanned pregnancies, right there in the pit. Everything you’ve ever heard about an R. Kelly show, the jokes, the eccentricities, the showmanship, the insanity – it’s all true and it’s all there. “Sing it with me now: I need an intern! Get me a towel! ‘Cause I’m a sweaty mutha fuck-a! Ooooh” he screamed under mating dove-shaped balloons floating above the crowd – that’s a part of a Pitchfork exclusive song that will likely never be heard again, but captures the mood perfectly.

As citizens slowly wandered off the grounds no one seemed upset, no one had anything negative to say. “It’s like, I only paid like fifty bucks for the whole day, which is what any one of these bands could charge alone, so it’s like I don’t feel like I have to get my money’s worth. “ Explains James, a high school teacher from St. Louis (I would worry about the quality of education those kids are getting). That, in a nutshell, sums up the vibe of Pitchfork. Unlike Lollapalooza or even a regular concert, people don’t have that get-to-the-front-or-else mentality either. Security is there, but not oppressive, and people stay courteous throughout the day, excusing themselves when they bump into each other and smiling when they meet eyes.

Word to the Pitchfork organizers: if you’re looking for a formula to please the fans of great new music, you’ve found it.