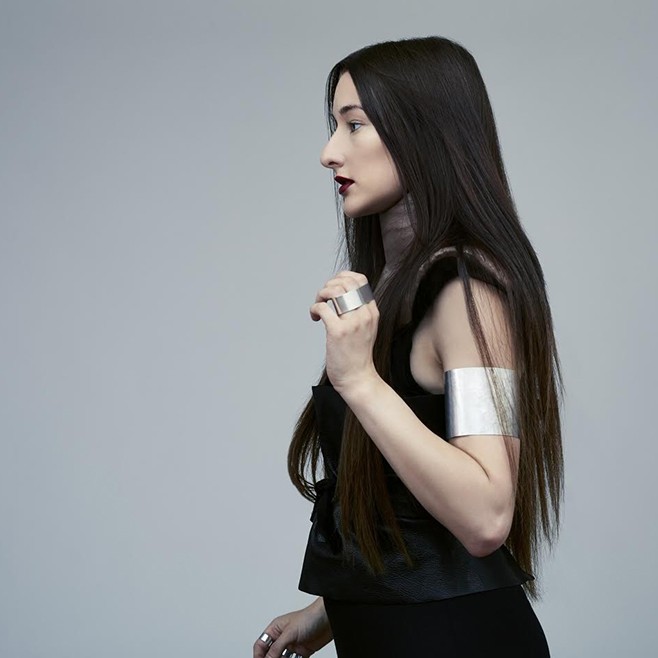 Zola Jesus (Nika Roza Danilova) occupies a strange place in pop culture. Her music – darkly melodic, hooky tracks accompanying that resonant, soulful voice – would sound exactly right to fans of everything from Muse to FKA twigs to Nick Cave to Chvrches. No artist has more apt and compelling social media skill; at times otherworldly, the Zola Jesus Instagram is a daily tutorial in creating a distinct and tonally appropriate visual accompaniment to an artist. Her striking appearance likewise elevates her to the rare air of the truly unique among her peers: she neither looks nor dresses like anyone else, not due to outrageousness, (a la Gaga) but owing to her own personal style, which extends to every aspect of her appearance on stage, record sleeves, and videos. She exudes strength, individuality, and sophistication while making challenging yet approachable music. So the question is, why isn’t she huge yet?

“Nail,” the new single from the EP, is accompanied by a video which perfectly manifests the Zola Jesus peculiarity. It’s a performance piece in which the camera is on her at all times: hair wet, clothed in a flesh-colored latex tankini with matching opera gloves, laying in a black latex sensory deprivation bed, she writhes and strains against a sheet of black latex that is vacuum-sealed over her. That description sounds salacious and in different hands it might be, but the effect, though certainly sensual, vacillates between vulnerability and horror. It’s uncomfortable yet hypnotic, a perfect complement to the music.

The first 1 minute and 49 seconds of “Nail” are a breathless plea, Zola Jesus’s voice layered atop itself in chorus and harmony with only thin, gentle synth padding behind her verses. Few electronic artists can boast this kind of vocal power and range and fewer would structure a song this daringly. At 1:50 when the full percussion, (faux?) orchestral synth, and deeper vocal layers kick in her repeated plea to “Set me free/Pull the nail out with your teeth” has become a hypnotic mantra – she no longer sounds expectant, but rather like she knows the line will go unanswered. Smartly arranged and beautifully performed, it’s an inherently dramatic track.

The Nail EP has two B-sides: “Circles” is a solid mid-tempo, Buddhist meditation of a track, stark and upfront with drum and piano accompanying vocals which accumulate, layer upon layer. It builds upon itself quite elegantly, threatening to erupt near the end, but instead resolving itself with a moment of silence, then echoes of vocals fading into nothing. Breakcore poster dude, Ryan Friedrich, contributes the panopticon remix of “Go (Blank Sea)”, which manages to stay just this side of overpowering the song with glitchy beeps and percussion. Intentionally disarming, the track begins with what sounds like Zappa-inspired Synclavier bursts of arpeggios and builds into a dense panoply of chirping rhythms, the original vocal anchoring the whole structure. It’s rather magnificent, a superior example of the kind of remix that just as often goes wrong.

If “Nail” is going to be heard beyond the existing Zola Jesus fandom, it’s the video that will accomplish it. She’s an artist who has a deep understanding of how every piece of her art works with the whole, and the video is striking and provocative. Hopefully it attracts the kind of attention Zola Jesus deserves.