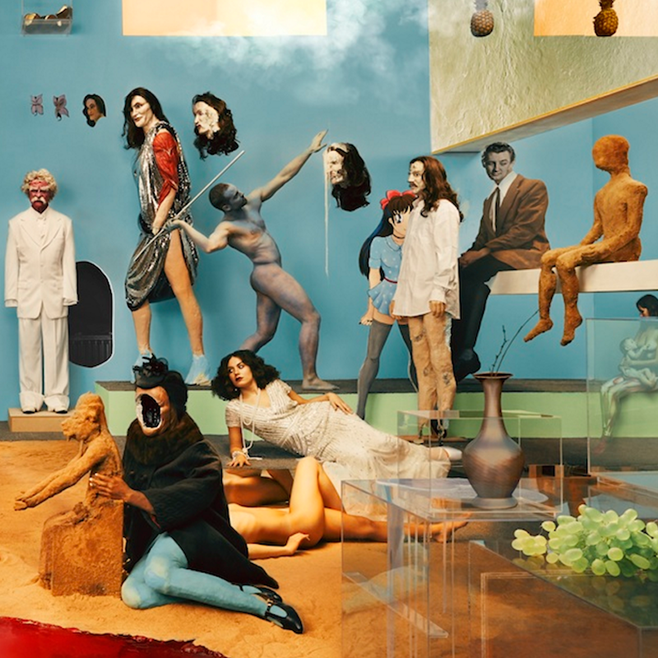 Apart from the bland “Silly Me” and the wheedling “Uma”, the tracks are a fine synth pop/rock/folksy mix: “Half Asleep” is pretty and catchy and has a Bollywood twang; “Prophecy Gun” is a study in ambience; and “Dead Sea Scrolls” is as much fun as “I Am Chemistry”, with a bit of a surprise ending. There are two half-minute-long pieces (the title track and “Computer Canticle 1”, more tribal than canticle) apparently tossed in as palette cleansers for all the verbiage and energy.

This is, over all, a far more interesting collection of sound than Yeasayer’s previous album, Fragrant World (2012).

After a New Age-y electronic opening, Amen & Goodbye plunges into the aforementioned “I Am Chemistry”. This is easily the best track here, with a brainworm intro, delicious vocals, and poison-obsessed lyrics cool enough to make up for deficiency in depth: “I’m digoxin from the foxglove plant/ The last remaining VX from Anniston/ […] I am chemistry.” The synth instrumental interlude I was ready to be bored with – this is where the music video becomes too college animation class, when the first nude claymation man slides into view.

And then the Hell-etubbies come in.

You won’t be able to listen to the bright, youthful chorus again without thinking of the creatures performing, with dead smiles, a temple dance for the harvest of toxic alien mould (“My mama told me not to fool with oleander…”). So watch the music video, especially if you like body horror and the art/films of Junji Ito.

Amen & Goodbye will be out on April 1, 2016. It may just alter your brain chemistry. Yeasayer begins its tour of Europe and North America on Feb. 12.