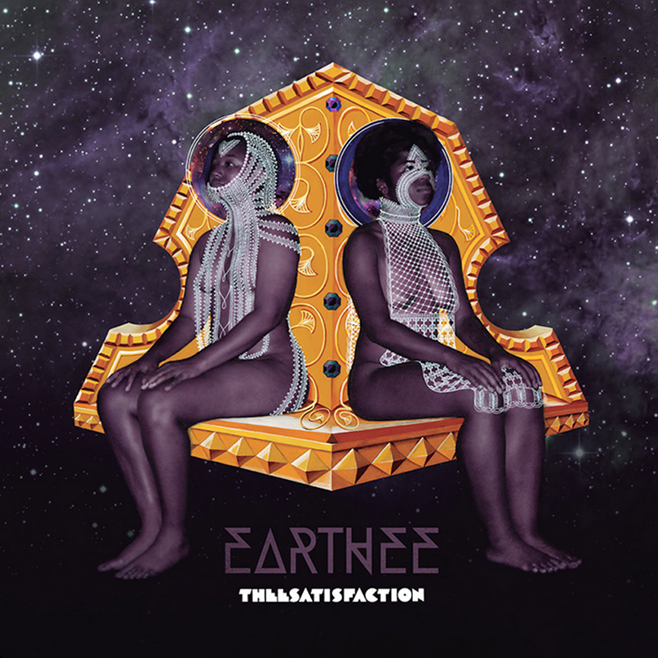 Rap artist Stasia (“Stas”) and sultry vocalist Cat make up the Seattle based duo THEEsatisfaction. These two extremely talented young women share a vision for supremely interesting music that offers intensity as well as complexity that not all will understand. Routinely classified as “alternative R&B”- mainly because their sound is just that difficult to label – the duo makes beautiful music that is spacey, a bit strange and offbeat; but it all seems to work somehow, offering a sound that is hard to describe but easy to enjoy.

earthEE is their sophomore album, a follow up to awE naturalE released in 2012. Song titles in this album include spacey themes such as “Planet for Sale,” “Universal Perspective” and of course the title track “earthEE,” creating a vibe that one could describe as “worldly soul.” The sounds of earthEE feature Stas and Cat’s signature cocktail of styles including off-tempo rapping layered with dreamy vocals mixed with heavy influences of soul, funk and beat poetry. This album differs from awE naturalE in the mellower vibe and less funk-inspired rhythms.

The lyrics are as heavy as the titles of the songs; take this sample from the track “No GMO”:

“We travel beyond our sight / Silently we move through the night / There is no height that provides fright / We truly understand our rights / Towards the stars we lift / In a most intentional way we drift / Where to? No one even knows / Just sit back and watch us grow”

The lyrics are a strong reflection of THEEsatisfaction’s beginnings at University of Washington, where Stas and Cat met at regular open mic nights on campus.Tracks like “no GMO,” “Blandland,” “Universal Perspective” and “earthEE” are all mellow, and filled with poetic words about existing in a medicated world. All songs featured on the album carry an underlying theme of understanding one’s existence, here on our planet earth. The galactic melodies matches perfectly to the new wave messages heard in earthEE.

This album also features music and influence from other up and coming new wave urban artists such as Shabazz Palaces (whom the duo collaborates with regularly), Erik Blood, Meshell Ndegeocello, Porter Ray and Taylor Brown. The entire crew that contributed to earthEE can be somewhat umbrella-labeled under “urban alternative rap and R&B,” but again it is difficult to classify their sound, especially in comparison to the common trap-rap and pop music we hear day to day.

earthEE is a perfect complement to an introspective mood. An awe inspiring album that opens the mind and the ears to a sound so fresh and new, earthEE is a gem in today’s music. Although odd at times and truly unique, THEEsatisfaction’s sound may not be for the masses, but their obvious talent will surely bring them success in a very niche market.