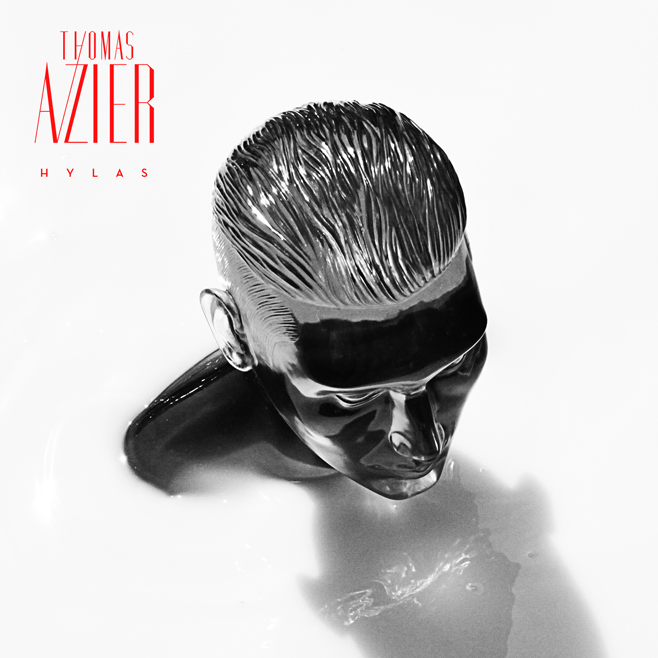 On the surface or when listened to from a distance, Thomas Azier’s debut album Hylas, sort of, kind of sounds a little like a darker version of Enya. There is a very clear retro electronica artery that runs through Hylas. If this album were made twenty-five years ago it would definitely be heard on the soundtrack to Blade Runner.

Though that’s just an initial shock. Like most music, it takes a few listens to get through the “this sounds like this” reaction all music lovers go through when they hear something new. And although Azier uses drum machine effects and zip zap laser sounds for that vintage feel, the production is vastly more complicated than anything that came out of pop music’s dark ages, three decades ago.

Azier is a one-man show. He started his own record label (Hylas Records/BMG, now Universal Music France), and he does all his own singing and song writing as well as composition – though he did get a little production help from fellow Berliner, Robin Hunt. Even without looking up the “about” section on his Facebook page, a trained ear can detect certain facts from the evidence provided by the speakers. For one, Thomas Azier is European. The Kraftwerk-esque Euro club vibe is strong with this one. In fact, he’s Dutch, but he’s been living in Germany and composing music in the Berlin club scene for seven years or so.  Delving a little further into his background, Azier says he was fed up with how jaded and ironic the Berlin club scene was. His music is more naïve and romantic than a lot of people were into when he started, so he had to study hard to gain a foothold in the discothèques where techno and EDM were king.

The songs of Hylas speak to this disillusion with Berlin and take on an autobiographical feel. “Ghostcity”, for instance, is clearly about the need to leave a city before it consumes you, though not alone. The other major theme of Hylas is the need to be with women. This is an oversimplification in its most extreme, nonetheless Hylas is an album of love songs: getting away with somebody, losing somebody, being with somebody. Some of the songs towards the end get a little roller-rinky, as in you could slap on some skates and hold hands to the dreamy flow of songs like “Golden Wave”, with the DJ saying, “Couples only on the floor”.

Thomas Azier probably knows a thing or two about holding hands. He’s a hard guy not to notice, especially when he opens his mouth. The most striking thing about Hylas is that sweeping, crooning, catcalling and lullabying voice. Thomas Azier can sing like the Devil Himself. No doubt it was that enthralling voice, coupled with his chiseled cheekbones and rogue earring dangling Billy Idol-style, that helped him gain popularity in the basement clubs during the early years of creating Hylas. Yes, Hylas took several years to make. There’s a lot of attention to detail on this album, very well thought out, it’s that German influence, perhaps.

Though Hylas has its roots in the clubs, it’s not dance music. It’s active stuff, but the vocals are too intense and the lyrics too evocative to lose your body in. It’s the kind of music you sit back and listen to. Music for staring out of windows to. With such a powerful voice and superb composition, Thomas Azier is setting a high standard for himself. Though vintage sounding, Hylas’s dynamic melodies make it an innovative and genuine work from an artist the world will be getting to know a lot more of in the years to come.