Purity Ring’s one Portland show this year has been sold out for months, and judging by online demand for tickets they could have booked an even larger theater. The group sits near the top of the current crop of synth-pop groups based on the strength of their 2012 debut Shrines and this year’s tonally similar follow-up Another Eternity. Both are full of clean, crisp pop songs that cry out to be loved, full of hooks and prose poesy. Singer Megan James and instrumentalist Corin Roddick have refined their sound, look, and performance to craft a unique niche for Purity Ring, and the result is a live show that adds just the right amount of theatricality to move from clubs to larger venues such as Portland’s historic Crystal Ballroom.

It speaks to the strength of the all-Canadian lineup that a good half of the capacity crowd was there before sundown. Openers Born Gold—perhaps not coincidentally, the band which used to count James and Roddick as members before they formed Purity Ring—was a largely unknown quantity. Tracks available online have a strong synth bent punctuated by a hint of 8-bit lo-fidelity, and might have been performed by a guy and his laptop. Live the band’s sound is more muscular, making the most of two percussionists and lead singer/guitarist/founder Cecil Frena’s energy. The set was danceable and fun, inspiring lots of talk and curiosity from an appreciative crowd.

Second on the bill was Braids, riding the buzz of their breakthrough single “Miniskirt.” The trio has more of a pop/rock sound than the rest of the bill, much of their music solidly mid tempo. Lead singer Raphaelle Standell-Preston established a lovely rapport with the crowd early in the set, relating anecdotes in a conversational tone that made the venue feel far more intimate than it was. This is among the most rare and unfakable of pop star gifts, a far cry from the “Hello, Cleveland!” clichéd fallback of many touring bands. Braids sounded tight as a drum. 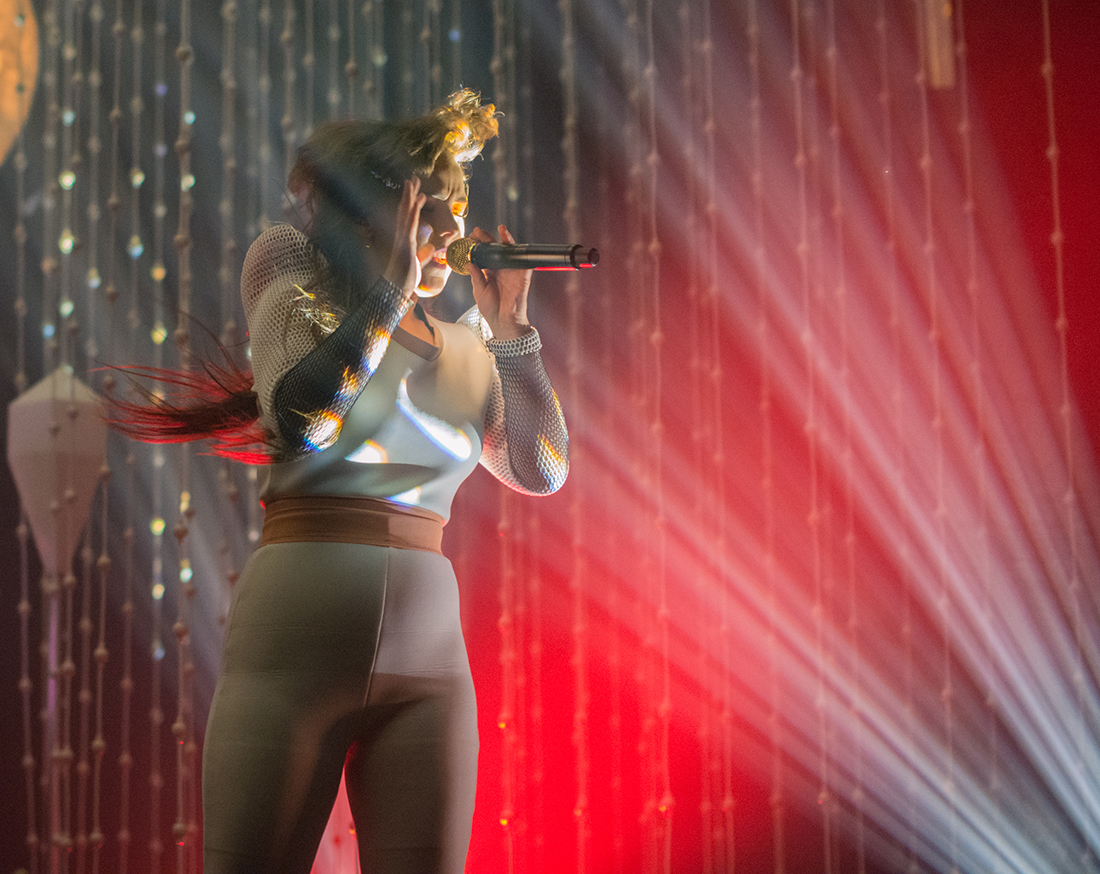 Purity Ring are one of a handful of groups who craft a visual brand as potent as their sound. The lighting design—long dangling stands of oversized LED pearls, the glowing alien sphere from the Another Eternity album cover hanging at center, Corin Roddick beneath it surrounded by tall crystalline “drums”—all tells a story of futurism and elegance. And the clothes! Megan James reportedly designs and sews their stagewear, which if true makes it all the more remarkable. Roddick’s black and white outfit was one part BMX, one part B-boy, one part Space: 1999 yet looked casual and contemporary. James, her hair constantly aswirl from multiple fans, strode on stage in a white neoprene jumpsuit with oversized white mesh shoulders and sleeves, recalling a sleeker, slinkier version of Tina Turner’s Aunty Entity from Mad Max: Beyond Thunderdome. The cumulative effect of all this was striking, a perfect accompaniment to the band’s sometimes dubsteppy, gently glitchy electropop, separating them tonally from the current crop of darkwave electronica groups that sometimes feel as if they are all cut from the same cloth. There’s nothing dark or edgy about Purity Ring. They gleam.

The band alternated back and forth between their two albums, demonstrating how consistent their sound and songwriting really is. Roddick’s setup, a tabletop controller and electronic drum trigger pads built into light-up crystals which surround him‚ allows him more activity than you’d expect. His musicianship is very much a strong visual element. But the bulk of the weight of crowd expectation falls on the structured shoulder pads of lead singer James. Emoting yet cool and aware of the crowd, she covered every inch of the stage three times over, making sure the fans felt they each got a moment with her. Her voice sounded clear and strong yet delicate, bringing just the right vulnerability and humanity to the synthesized soundscapes of the music.

Roddick mingled with the crowd during the breaks between sets, happily chatting and posing for photos with fans. Purity Ring is getting to the point where that won’t be possible for much longer. With increased popularity comes forced isolation, and the Another Eternity tour might be the last one where such casual bonhomie is possible.