by Laura Eley and Kateryna Topol | photos by Marcin Barciak

NXNE 2014 officially wrapped-up on Sunday as festivalgoers retired their earplugs, nursed their blisters and bruises, topped up their song lists, and finished digesting a week’s worth of Pilsner. With tired out voices and flaming shoulder blades we nostalgically look back at the weekend past.

Saturday brought to Toronto M for Montreal’s Bruise Cruise. After a long wait and a slow boarding our cruise ship departing at around half past one. Promptly after The Posterz took the stage in the lower deck and the party cruised in full swing. While some attendees crowded by the stage, jamming and shouting along being occasionally sprayed on out of water guns the rest were roaming the upper-decks of the ship under the hot hot heat of the July sun.

Popping in and out from the music floor it was easy to enjoy the bands even outside. Montréal’s Walter TV followed with their authentic, loud, miss-mushing sound reminiscent of recent Animal Sound. The ship’s echo was not kind to their set, sound did not travel well and appeared incredibly noisy and messy but the boaters did not seem to mind. Back up on the deck it was obvious some people only moved to get another beer while peacefully dozing off in the shade staring out into the lake.

As the Bruise Cruise headed back self-proclaimed space captain Calvin Love took the stage cooling down the atmosphere with his nostalgic fast moving tracks and rusty voice. Those who obviously got on the boat for PS I Love You packed in by the stage dripping excitement. The rest impatiently hovered around the exit clearly not giving a single damn about the still happening show downstairs. 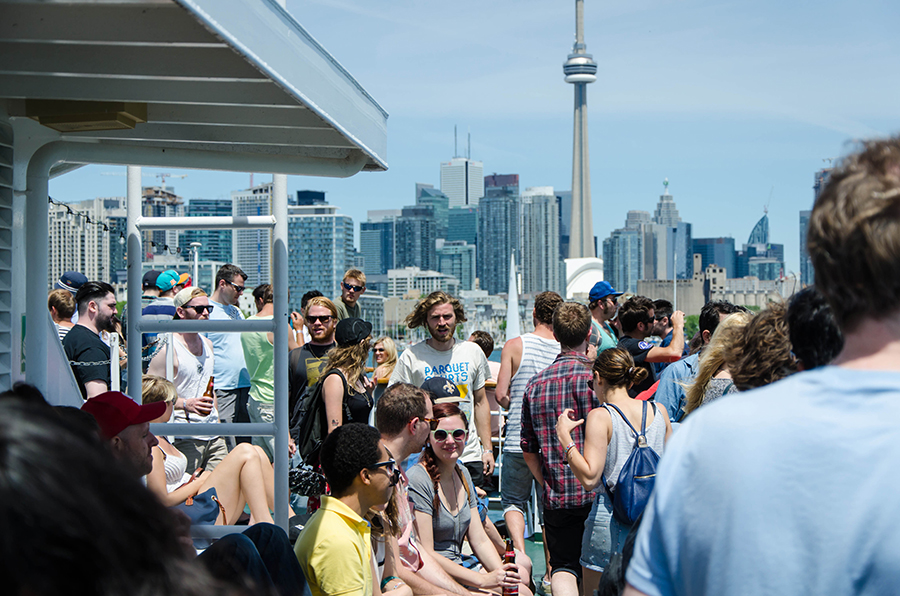 Later in the evening the regular program resumed with Bailiff. Playing in the shade of a maple tree, the three-piece Chicago band brought a range of alt-rock tunes to the afternoon backyard barbecue of Laing Street. Surrounded by a still composed crowd sipping beer and eating pasta salad, the tight-knit quarters provided the perfect setup for a range of quick-moving acts that gave Bailiff an opportunity to balance out the energy of the afternoon’s previous rotation of metalcore and rap performances. With an LP released earlier in the year, this threesome is tenured and strong, with a distinct and engaging sound.

Laurel, a young UK native, is set to release her debut album in 2015 and is already garnering praise for her sultry love (and lust) songs that are drawing comparisons to Lana Del Rey. Assuming her place on the Tattoo stage with her humble presence, Laurel appealed with a down-to-earth approach that played well into her dreamy sound. While an over-zealous fog machinist cast a haze to rival a ballroom wedding entrance, the performance was well received and highlighted by the singer’s genuine excitement (it was her second-ever Canadian gig following last night’s performance at Edward Day). Keep an eye on what’s up next for this rising musician.

Following Laurel came Future Islands. Since their captivating appearance on Letterman, Future Islands have shot into pop culture’s relevancy and are tearing-up the charts with tracks off their latest album Singles. With four LPs already under their collective belt, these synth-pop Baltimorians are no amateurs. Watching front man Samuel Herring perform live is seriously magical; his energy and sincerity are as infectious as the plague and a true measure of his incredible showmanship. A personal favourite of NXNE, and one of the few performances through which (despite being alone) I could not stop smiling.

Down and over the smiles were spreading across the Garrison while Brooklyn’s Snowmine were playing out their earthy rich pop sounds. The band has been compared to Fleet Foxes and Jim Jones but if you really listen to them you will notice a distinctly different tribal influence. The performance was calm and simple, just a few dudes playing their music, but somehow there was nothing lacking. (Though there was a  little too much on stage, seriously Grayson, the equipment needs to come out of the box). The overall performance was clean, clear and inspiring.

Ending the night on a different note a streetcar and a walk away in no time we were at the Adelaide Hall watching Run The Jewels spreading their wisdom with harsh-cutting lyrics and beats. El-P and Killer Mike’s quick success has them headlining festivals across North America all summer and it is the praise is well deserved. You know shit’s getting real when there are people crowd-surfing at a hip hop show. Run the jewels, jewels, jewels. “If you see a m****fucker surfing you DO NOT drop the m****fucker on the ground,” noted Killer Mike with a grin on his face. Everyone was dropping a sweat while clattering their beer cans and plastic liquor cups. Watch out hip hop world, these two are going places.