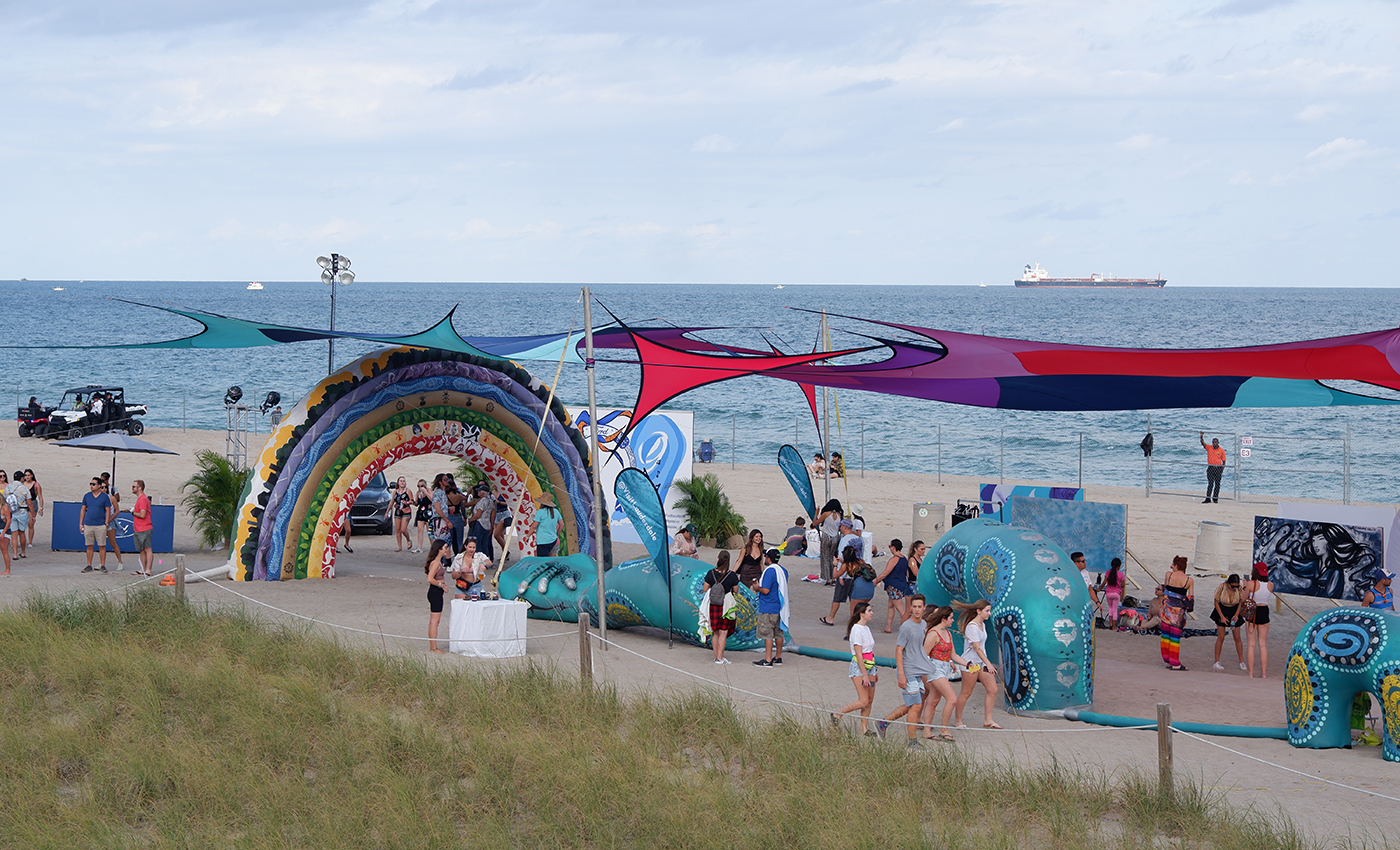 Positioned directly on the Fort Lauderdale beach, Riptide Music Festival is a two-day festival showcasing over 20 musicians and a mix of art, fashion, and culinary events. Returning for its 4th edition this year, Riptide has been designated as the Broward County signature event, allowing organizers to create the biggest, most engaging visitor experience in the festival history thus far. On the opening day, hundreds of people can be seen strolling along the 7-mile long beach towards the festival grounds, trying to beat the car traffic.

Entry into the gated festival area is a rainbow shaped gate with a quilt-like pattern, immediately setting a wonderland-kind of mood. This front area of the park is called Underground Village and is hosted by the Underground Lauderdale, an official organization shining a spotlight on the largely undiscovered wealth of cultural experiences in the Greater Fort Lauderdale (GFL).

The sandy dunes are divided by walkable pathways, framed by art structures, attractions from the Renaissance Festival, oversized and textured beach balls, blowup igloo, and an array of brand activations like full-body dipping and a floor piano at the tourism booth. The early attendees can be spotted relaxing on beach blankets, basking in the sun, while celebrity chefs from the Maximus mobile kitchen are doing live food demos. Shortly after one of the food demos came to an end, L.A.’s K.Flay took the stage for her afternoon performance. 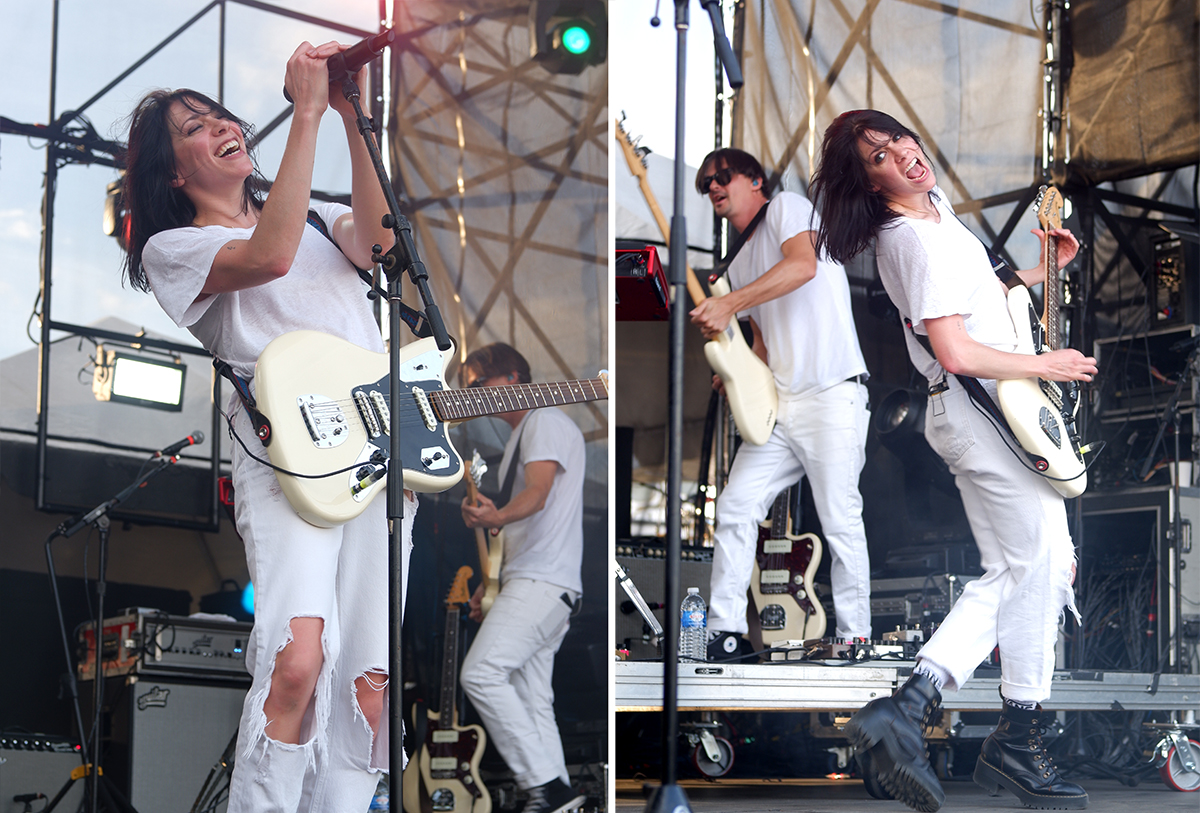 The singer and lyricist, dressed in all white, begun her performance with “Not In California” and  “This Baby Don’t Cry” off her recent release Solutions. This performance is a part of the Solutions tour so naturally Flay spoke to her motivation and search for solutions when greeting the crowd, encouraging them to do the same and concentrate on what they truly care about. The fans were eating up Flay’s words like cake, nodding in agreement while gripping to the barricade trying to get closer to the artist. Pacing back and forth along the stage, occasionally picking up her guitar, playing with the bandmates, and dancing during vocal breaks, K.Flay is contagiously energetic and incredibly hard to not dance along with.

Walking away from the Underground Stage, past Ford Blue Lounge where up-and-coming talent is playing more intimate shows throughout the day, is the Shipwrecked stage, decorated with giant octopus tentacles, already fully occupied by music fans sipping cold White Claw, patiently waiting for The Revivalists to start. Over a decade in the making, this New Orleans rock band are a staple not only in the NoLa scene but the genre in general and gather a dedicated following for each live show. The band, generously spread out across the stage with a bright pink neon heart in the background, have great on-stage chemistry, seamlessly playing off of each other while David Shaw [bottom image] works the front of the stage engaging the fans. For nearly an hour the band played tracks from the latest album Take Good Care, like “You Said It All” and “Change” and some older crowd-pleasers. 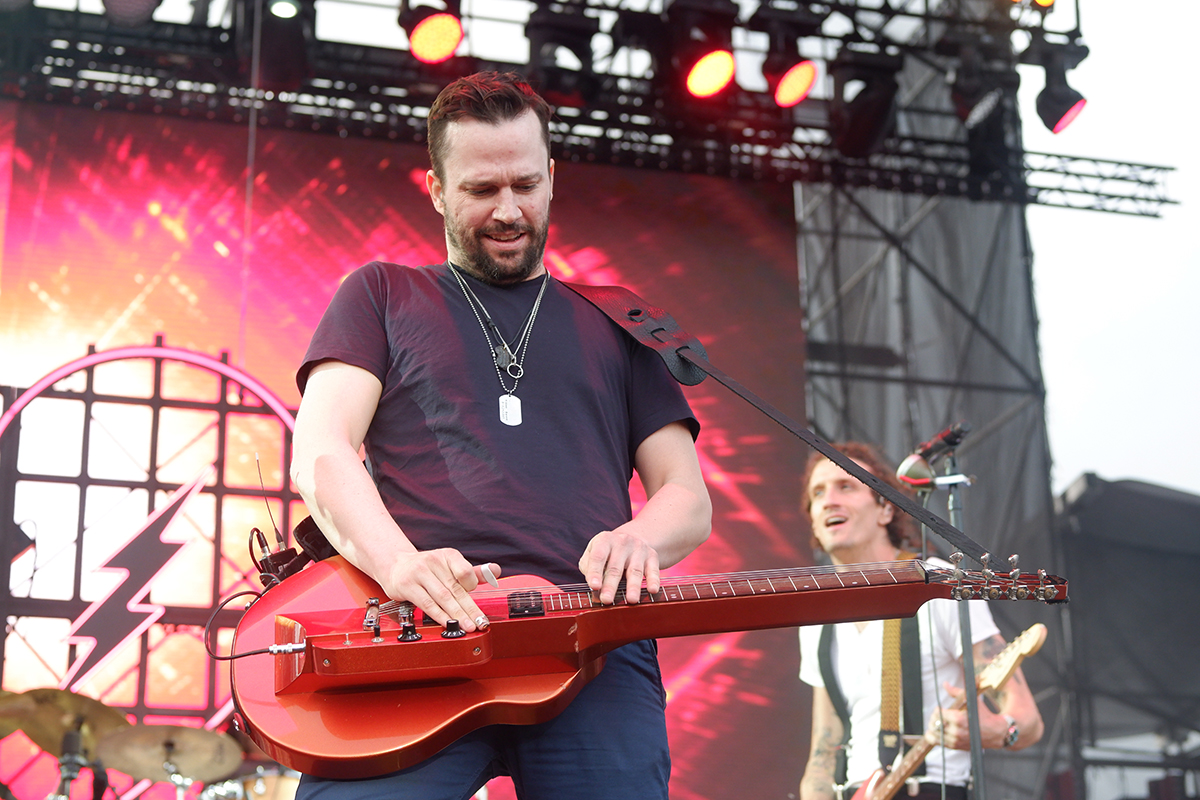 Lauderdale is one of those few places where the nights are dark and with limited light pollution (mainly because the majority of the lights are dimmed as a part of the turtle protection program) so seeing live stage performances in this complete darkness is a very special experience. When Nashville’s Judah & The Lion begun their set it was precisely that time of night. From an elevated viewpoint you can hardly see the crowd while the stage pyrotechnics explode with spectacular power. Judah & the Lion, dressed in matching yellow t-shirts and track pants, had quite a few surprises during their set each of which drove the crowd wild with excitement.

The band’s latest release, Pep Talks, earned a lot of love since its release earlier this year so when Judah Akers began “Pep Talk” single a large portion of the audience knew the words off by heart which Akers took advantage off throughout the set, inviting them to sing and clap along. Pep Talks is an album that aims to spread love and positivity and with anthem tracks like “Alright” and “Why Did You Run?” they undoubtedly achieve that message with impressive ease. The set ended with a squad of dancers, dressed in athletic tanks and track pants, perform a synchronized dance during which the pants tore off exposing short shorts – one of the above mentioned many surprises from Judah & the Lion.

At the far side of the festival grounds is the dedicated VIP area with a side view of the main stage and plenty of space to roam around for all of those trying to avoid the mosh pit and long bar lineups. From this side, an elevated Cabana lounge offers a fantastic view on the Shipwrecked stage where The 1975s created a slightly surreal experience with a large neon rectangle framing Matthew Healy, blending background and foreground visuals in an interactive manner. The live video stream on the sides of the stage had matching graphics to go with the stage visuals, a seamlessly branded band performance. The 1975s music at times has bluesy undertones that when paired with pop synths sound a bit like k-pop. Healy, joined on stage by two backup dancers, kept on addressing the crowd as “Babies” asking how people were feeling and sharing how happy they all were to be back in America between tracks from A Brief Inquiry into Online Relationships and singles like “Sincerity Is Scary.” 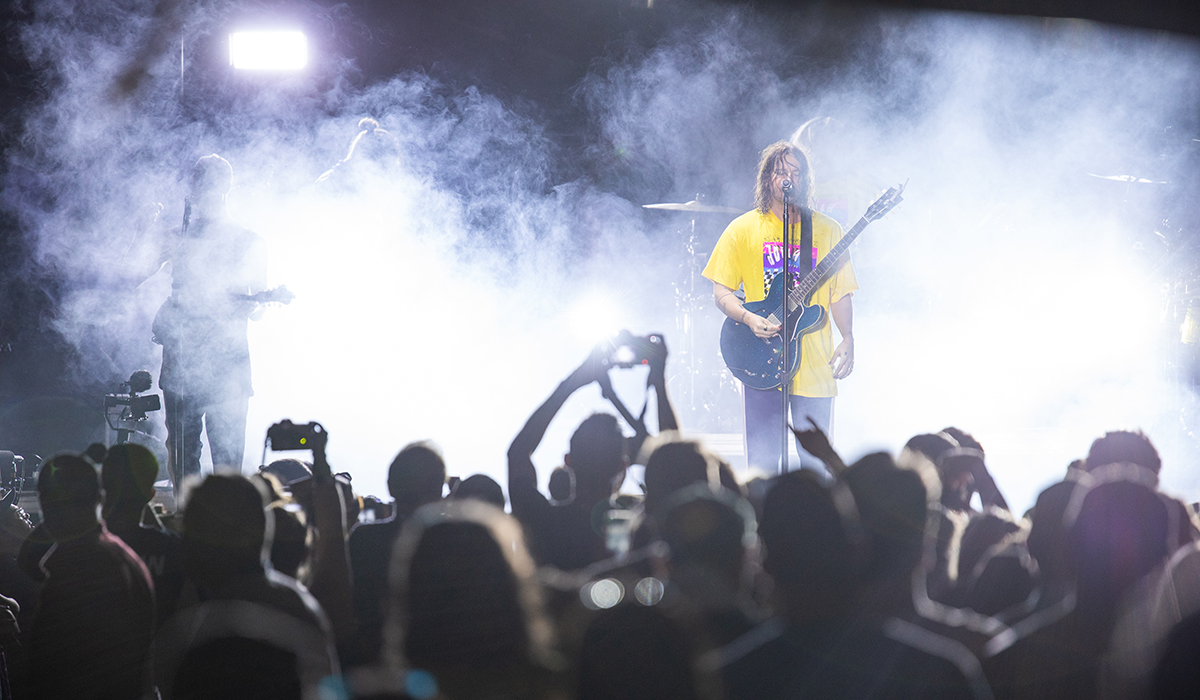 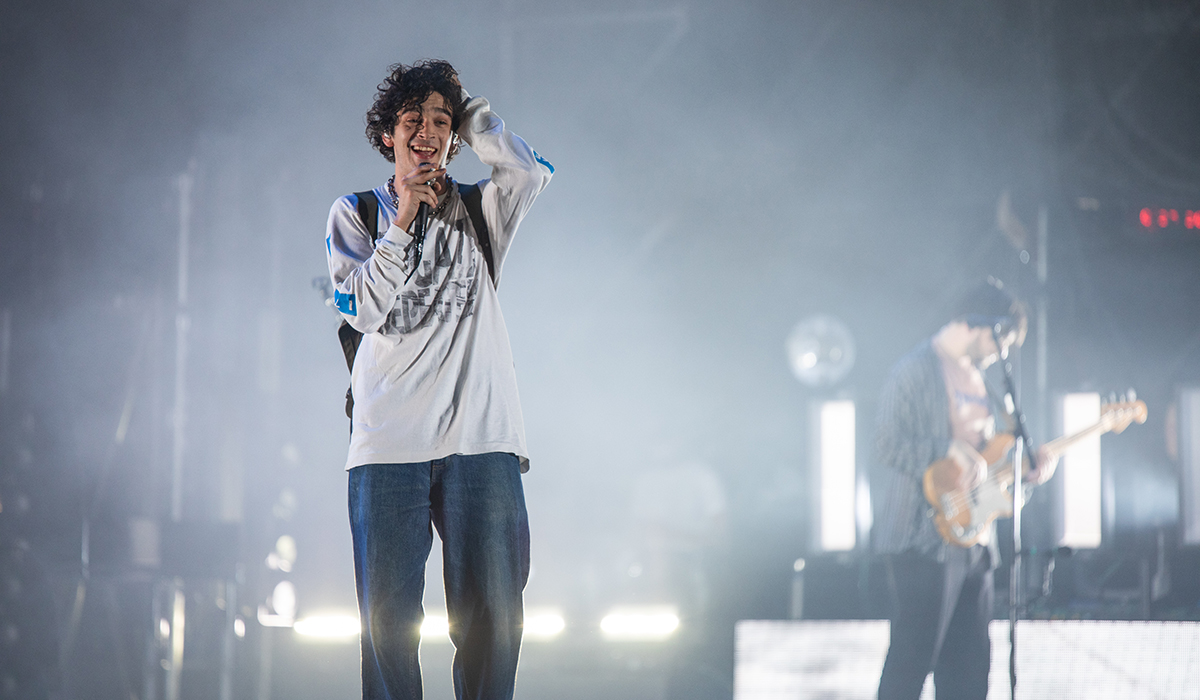 The weekend’s most anticipated performance, however, was The Killers. The band has been on a bit of the hiatus since releasing Wonderful Wonderful in 2017 but the fans haven’t forgotten. Earlier this fall The Killers released a lineup of stadium dates for Imploding The Mirage tour nearly all of which were sold out within a couple of hours. The album by the same name is not set to release until Spring 2020 but the warm can begin now.

It was a show everyone was talking about and the one that the beach was particularly packed for. For over an hour the lead singer Brandon Flowers worked his way through the entire repertoire of songs with tracks like “When You Were Young” (Sam’s Town), “The Way It Was” (Battle Born), “Run For Cover“ (Wonderful Wonderful), and off course their breakthrough single “Mr Brightside” (Hot Fuss). Throughout the set Flowers shared small sentiments with the audience and how easy it was for them to say “Yes” to performing a Tom Petty tribute last year, which they once again did tonight. The live stream occasionally had music video effects to match the songs and was aired in full black and white for “The Way It Was,” very authentically retro.

Halfway through the set Flowers shared they had a song for people who like to drum and pulled in an enthusiastic fan to play “For Reasons Unknown” with the band. With the first few beats, it was obvious the guest player (17-year-old local Jayson Verebay) knew exactly what he was doing. The park audience erupted in proud cheers as Jason expertly drummed his part in the song, and on the way out he did a quick interview with the Rolling Stone. Needless to say Jason’s life has changed since but we’ll have to wait and see what he’ll do next.

November in Fort Lauderdale is a southern winter, mostly noticeable through waves of cool breeze but the ‘winter winds’ aside it is still very much a beach destination and Riptide is a beach music festival. It’s a destination festival not far from home (if you’re not a local) and one that offers a unique experience that can only be achieved through a community-driven organizational efforts. People come here to hear the bands but they come early and return again and again for the atmosphere and the view. And in the morning, if your hangover is not too tragic, you can break away to explore the nearby breweries, local art, or go on a classy boat ride along the many canals, an easy way to spend a weekend. 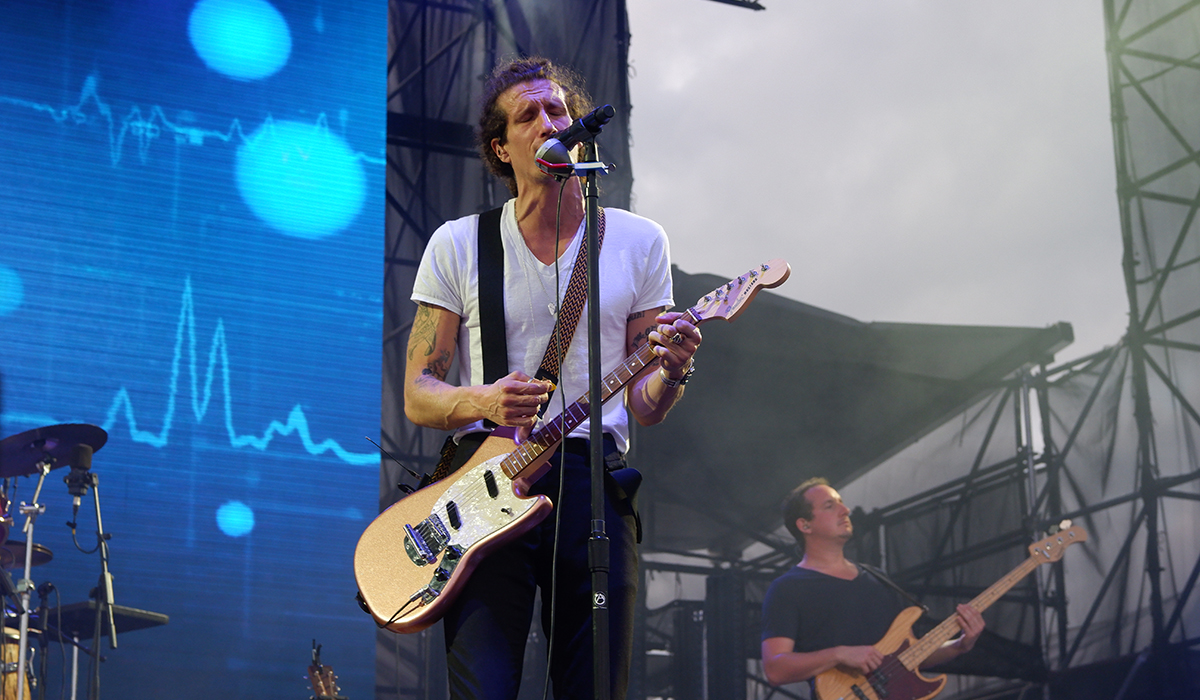 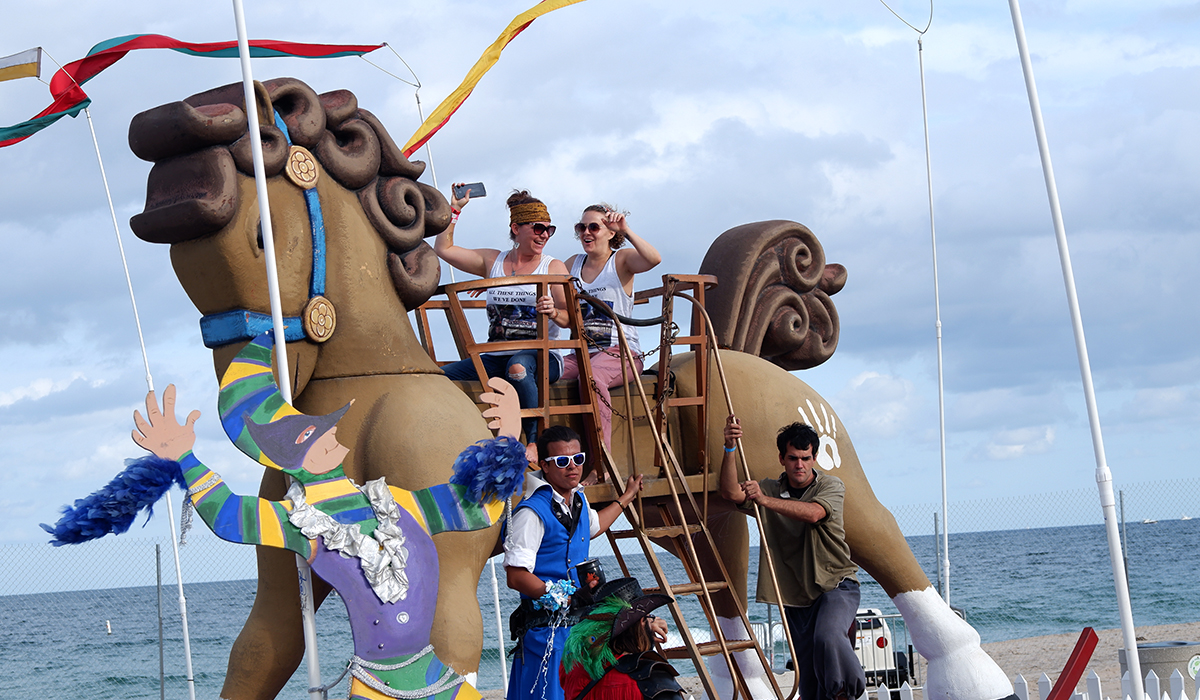