This article is one in a series, we asked artists to reflect on their life and career in 2020 and share what they were able to accomplish during this incredibly challenging year. Read on to find out what each artist had to say.

American singer-songwriter Norma Jean Martine is her own musician and co-writer for a list of pop stars around the world. Her most recent single, “Basketball,” is an upbeat Wankelmut remix and a song that’s sure to improve your mood, whatever the mood might be. Currently working on her next EP Visiting Hours’ Martine is on a mission to share her husky voice and strong writing skills with the world.

Norma Jean Martine: 2020 started off with me staying in a little apartment in Kaiserslautern, Germany with my boyfriend at the time. His family lives there, so it’s a place that I’ve visited often. Experiencing New Year’s Eve there was a little anxiety-provoking for me because I’m afraid of fireworks, but also extremely beautiful. In the US fireworks are much more controlled, whereas in Germany it felt like anyone who wanted to could just set one-off, so they were literally EVERYWHERE. It’s something I will never forget, ringing in 2020.

Shortly after I moved back to London and was living in a warehouse in Manor House with 18 other people. That was a fun time, meeting other creatives, and feeling like a part of a community. That’s where I was when the world ended in March, and very quickly I had to make the decision to put everything I owned in London into a storage unit and fly back to New York to be with my family before the border closed. I bought my flight on a Friday, packed the storage unit on Saturday, flew on Sunday, and the border closed Monday night. I just made it! Since then I’ve been home, living in the house I grew up in, with my mom. That experience started with watching Governor Cuomo’s updates each morning over coffee and then sewing countless masks.

In a world where it feels like you can just buy a mask, hand sanitizer, and gloves anywhere at any given moments, it’s hard to remember that in March and April you couldn’t find a mask anywhere, and people were selling tiny bottles of hand sanitizer for £12 (or more!!). So I sewed A LOT. I sold a few to people who could afford them to compensate for my time and the materials, but I also donated hundreds to local hospitals and to friends who could then hand them out to people they knew. It was a pretty cool memory being in Walmart and seeing multiple people from my hometown wearing the masks I had made. It made me feel really proud and that I was doing a good thing in helping to protect my community. Sewing is a skill that I’ve had since I was a little girl, making my barbies their own clothes. When I was 18 I sewed my own prom dress. So coming home, and dusting off my old sewing machine, and using that skill for good was really awesome.

Everything shifted again with the George Floyd murder. I felt my social media was just absolutely flooded with information, and since I had so much time to myself, I took the opportunity to educate myself further on the issues. It’s something I’d been interested in and focused on for some time, but given the vast information at my fingertips, and the time to dive into all of it, I certainly came to terms with my own racial bias in a deeper way. I even went as far as digging into my family history, and my ancestral traumas in terms of race, and how those experiences have trickled down to my own understanding and bias. I feel like that deep work really needs to be done to unlearn what is absorbed almost by osmosis in this society.

Protesting in my hometown was so powerful, and I felt so proud of my community. The town I grew up in is 86% BIPOC, yet our police force is mostly white. To see hundreds, if not thousands of people come out, and shut down Route 211, which is our main road, was incredible. It was pretty cool marching past my father’s car garage. I don’t think anything like that had ever happened in Middletown before. Through the protesting I met some new friends and got involved in community work here. We did a school supply drive for kids in need, and we did a lot of work educating the community on the illegal and toxic fracked gas power plant that was built on the outskirts of our town. It’s literally in my back yard, so I see it every day, but for people who live more in the center of town, it’s not in their face, so many people in Middletown do not know the power-plant exists, let alone the health and environmental impacts of its emissions.

I’d always been interested in activism, and am an activist in my own small personal ways through my diet and spending habits, but getting involved on a community level was a new thing for me, and something I’m not sure that I’ll ever be able to shut off now that I’m involved. It’s sort of like, once you know these issues exist, and you find a group of people who feel the same way, you can’t not help make it better. A few community members and I have started a group to create a more equitable education system in our town, so that’s where my focus is now.

At the end of summer, I went through a break-up which was tough. It’s still something I’m working through. I think many people can relate right now with the lockdown, that the space of quarantine really makes issues more apparent than they were before. During the breakup, I started an herbalism course. That’s been a really beautiful experience, and I recommend diving into herbalism for anyone who is looking for a deeper connection to self and nature.

In October, I really started getting back into zoom sessions, and I’ve learned to record and compose my own vocals. It’s been incredibly empowering for me because I can suddenly create without depending on a producer to record me. I’ve also been intentionally doing a lot more all-female sessions, and those are literally the BEST. I met two really cool artists called TOMI and Talltale during a virtual camp, and we are writing some really cool stuff together.

At Thanksgiving, my parents and I had COVID. We did okay, but there were some scary moments. The one good thing about getting it is the release of anxiety, and the ability to see people again knowing that you can’t catch it or spread it anymore, at least for a little while. So in a way, I’m grateful I had it. The anxiety was literally driving me crazy all year.

I guess the other huge thing that I almost forgot that happened in 2020 is the crazy success of “Head Shoulders Knees and Toes!” That song was written right before the lockdown, and released in May. I’m so grateful for this song because I’ve been able to have really happy moments and feel accomplished and earn money in a time when a lot of things are pretty awful. It’s also opened up new doors for me, so I have some pretty exciting things in the works as a result. Overall, 2020 hasn’t been so bad!

Q: Have you learned anything about yourself, your fans, or the industry?

NJM: I learned a TON about myself. I learned that living in a small town, even my hometown isn’t that bad. Finding such a cool and purposeful community here through the movement has been really awesome. I used to feel so disconnected living in London, even though there were literally millions of people living around me. Yet here, in the town I ran away from because I hated it so much, I’ve somehow come back and found these amazing people all with a common purpose. This realization is something I want to bring forward anywhere I end up. I’ve toyed with the idea of LA for a while, and this experience has made me realize that I need normalcy in my life. I can’t just be friends with other music people. I need to find something more grounded wherever I am.

I’ve learned to move on and let go through my break up, two things that I’ve always really struggled with. I’ve realized that I might be one person, but I can make a huge difference to the collective through my mask making, but also through anything, whether that’s spreading valuable life-changing information, or making people dance during a pandemic. 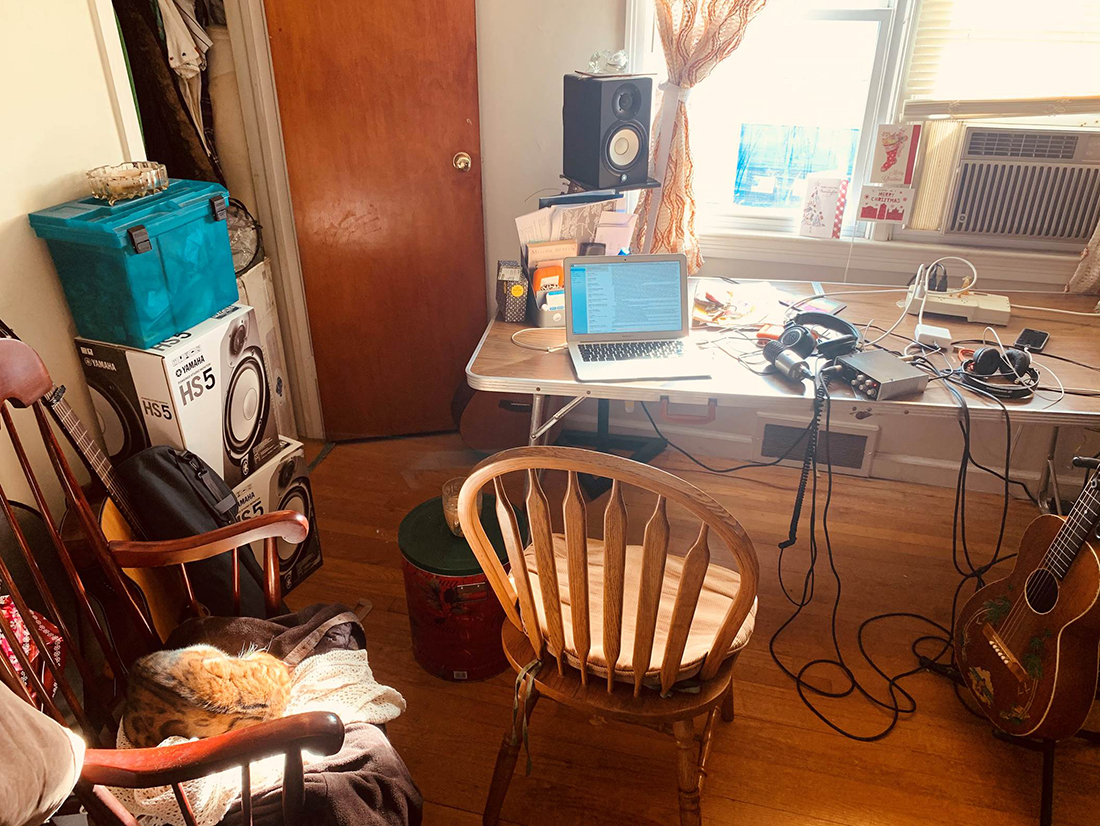 Q: What have you been missing most?

NJM: Just seeing people honestly. I’m home, but I rarely see anyone from my family but my mom and dad. I really miss my friends who are all over the globe. I also really miss traveling. Being still has been a wonderful spiritual exercise for me, since I’ve traveled so much in the past 10 years, but I have definitely come to terms with the fact that I am an adventurer at heart.

Q: What new music have you made?

NJM: I’ve been writing a lot over the past 2-3 months. I’m working on a lot of new dance tunes, but also working on a project called “songs to watch clouds to” which is more of a vanity project, but I’m honestly SO excited about it.

Q: Did you collaborate with anyone?

NJM: I’ve been working more with Hight and Quarterhead who I wrote “Head Shoulders” with, as well as Jonas Kroeper (Sam Feldt “Post Malone”), and Freedo (Chainsmokers “Takeaway”), among others on the dance/pop side. I wrote a really cool song with Alice Ivy from Australia that I can’t wait for everyone to hear.

As a writer for other artists, I’ve been working more with Girli, who is an artist that I’ve been helping to redevelop for over a year now with Max Mostley. She’s amazing, and her last single “Letter To My Ex” is one of my favorite songs I’ve ever been apart of. I’ve also loved working with TOMI and Talltale on the clouds project, as well as Brian West and Matthew Angus from Canadian indie band The Fast Romantics.

Q: Do you have any live streams coming up?

NJM: No I don’t, but I should do something like that sometime soon. I’m awful at social media. I honestly sometimes wish we could go back to the 90’s when it didn’t exist and we actually had to write physical letters to artists fan clubs.

NJM: Well, number one, COVID is real, please protect yourselves. Even if you don’t get it badly, you may pass it on to someone who will. Besides that, be kind and be vegan 🙂