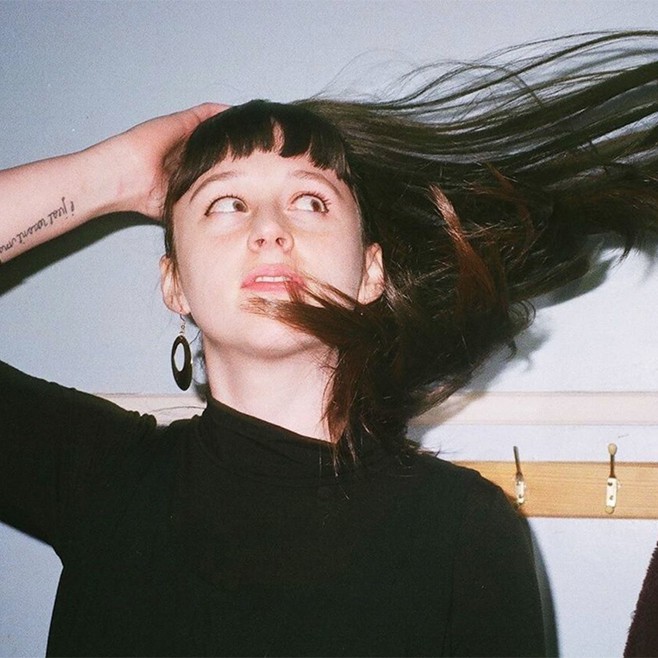 Katie Crutchfields’s music project Waxahatchee is currently touring behind their 4th LP, Out in The Strom, the most produced, polished release she’s done so far. Noteworthy producer John Agnello (Kurt Vile, SonicYouth and Dinosaur Jr) helped with creating this piece. Although many are saying this is a guitar heavy album I was mostly taken by the vocals. For quite a few of the ballads Crutchfield is sans-guitar supported by either her twin sister Allison on the keys or lead guitarist Katie Harkin on the strings (also touring guitarist for Sleater Kinney).

The set started with “Recite Remorse,” smoke filled the stage and all eyes were on Crutchfield. While the majority of her albums have been about relationships and loss, Out in The Storm, is different in the sense that it’s about what happens in the aftermath – who we become or evolve into after the relationship ends. Next up was “Silver” which for all intensive purposes is the title track of the album thanks to the lyrics like ‘If I turn to stone /The whole world keeps turnin’/I went out in the storm/And I’m never returnin’.

Crutchfield’s band was dressed in suits accept her and her sister who wore an amalgamation of a sexy formfitting top under and blazer blazer, while Crutchfield herself was in a stylish, minimalist dress that buttoned up to the throat. The band took some time to tune guitars and make jokes about not drinking after the second track (the twins of Waxahatchee love a good cocktail, it’s common knowledge and often topics of their songs) before playing “Poison” from Ivy Tripp. At this point I realized there were three guitars playing at once transmitting immense noise and power. The band continued to go through a combination of Ivy Tripp, Cerulean Salt, and Out in the Storm. During tracks from Cerulean Salt or guitar heavy tracks such as “Brass” Crutchfield whipped her hair around like a banshee. Waxahatchee closed out the set with “Under a Rock,” definitely one of the most popular tracks in the catalog.

Seeing Crutchfield live at this point in her career is like watching someone graduate high school. They’ve worked really hard, they have a ton of potential, and you’re just stoked to see what they will do with it. Her songwriting, stage presence, and musicianship has only improved and being backed by a label like Merge will only give her more opportunities to explore herself and her sound. I’m extremely excited to see where this progression takes her.

Waxahatchee is currently on their North American Tour until August 19th, after that you’ll have to head overseas to catch them.