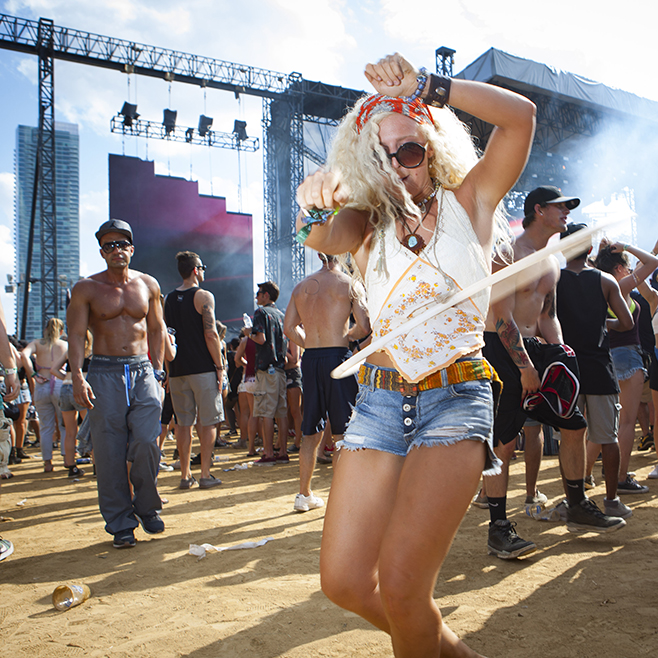 Being the very first musician at a major festival is a proposition akin to being the first astronaut to try out the new spaceship design. It’s an honor, but also a test of fortitude. Luckily Gabriel Garzon-Montano has the right stuff, and the small but lively crowd at his stage is as-of-yet ignorant to the trials Lollapalooza can wreak on the human body and spirit at then end of a long day. Although Lollapalooza, like any festival, is a celebration of art, culture, and music, it’s predicated on cramming a zillion people into a small, loud space, with bugs, during the hottest month of the year. Normally this is a recipe for public insurrection, but the root of the festival, any festival, is the triumph of good vibes over nature, and Lollapalooza is no exception.

During Glass Animals, for instance, the crowd appears more like organs in some massive super being than individuals. Something about the heat and melodic tunes cause a herd mentality that keeps everybody sedately swaying, always keeping a respectable distance from one another. The rules of the pit are enforced like a code of honor: nobody likes touching the slimy skin of a sweaty neighbor, so no sweaty neighbors thrust themselves on to anybody. Another interesting thing is that although Glass Animal’s audience is composed of teens and early-twenties types, there are almost no cell phones held above people’s heads. It’s as if a hive-mind consensus was psychically reached, wherein all parties would watch the show and wiggle around pleasantly without digital interference. There is one free radical in the group, a shirtless teenager charging through the ranks yelling nonsense. He stops at a stranger, grabs him by the shoulders, and raises his voice so as to disturb everybody nearby. He is not part of the hive. He has to be eliminated. The crowd works as one to push him off to the periphery and he’s never heard from again.

Broods is from a very hot country – New Zealand – so they accept the daily highs of a Chicago heat wave in rock-star form: belting every lyric, punctuating each drum beat with a stomp, moving around the stage like cooks in a kitchen – deftly and with utilitarian grace. When a performer is on-point with the precision of a well-lubed spindle in a jet turbine, it’s easy to lose oneself in the ambiance. Even for those who have no idea who or what they’re watching, the experience of being around others who are so enthralled and moving with passion forces onlookers to become participants. Like an image from some mythical druid legend, the audience dances like worshippers to the chants of a high priestess. Each person feeding and growing off the energy of the others, and Broods at the head, consuming it all. In a less pregnancy and STD aware culture, the Broods show could have dissolved into the most debaucherous bacchanal of all time. Instead, when the show ends, everybody looks around flushed and slightly embarrassed. The trance is broken and the audience scurries away like so many mice fleeing from the light of an opened door.

Whatever god watches over Lollapalooza, her symbol is the dragonfly. They feed on the insects that feed on humans, mosquitoes and flies, and as the human mass of the festival grows denser, the insect mass overhead follows in kind. While Alt-J gently erupts on stage, the audience moves zombie-like, closer, closing in until every last possible inch of space is taken up by pressing flesh, gyrating back and forth with the music. Then, as the final song dwindles off into the air, the crowd surges, rushing the stage. Cooler heads do their best to resist the stampede, but to do so is like swimming against the Colorado River. Nonetheless a few characters manage to escape, only to be consumed again by the giant amoeba of Paul McCartney fans stretching from the main stage back through half the city.

While Beatles songs coo away on one end of Grant Park, a sinister force takes over the other. Enshrouded in darkness, wearing a skull mask with glowing eyes, and standing inside a transparent cube, Flying Lotus announces to the audience, “You’re Dead” with the nonchalance of somebody saying, “Hello.” His set went on to transcend reality, time, and consciousness. The crowd could have been forty people strong; it could have been four thousand. Nothing exists during the Flying Lotus show except what he chooses to project onto his cube. Through that geometric screen the audience is treated to scenes from the peaks of Heaven to the trenches of Hell. There are no dragonflies overhead; we are beyond their domain.

And as the clock strikes ten, and the performers end their shows in time with the noise ordinances set in place by the City of Chicago, the International Space Station makes a scheduled low pass. Lit by the full moon, it’s the brightest moving object in the sky. On this Friday night two of humanity’s greatest collaborative accomplishments wink at each other.