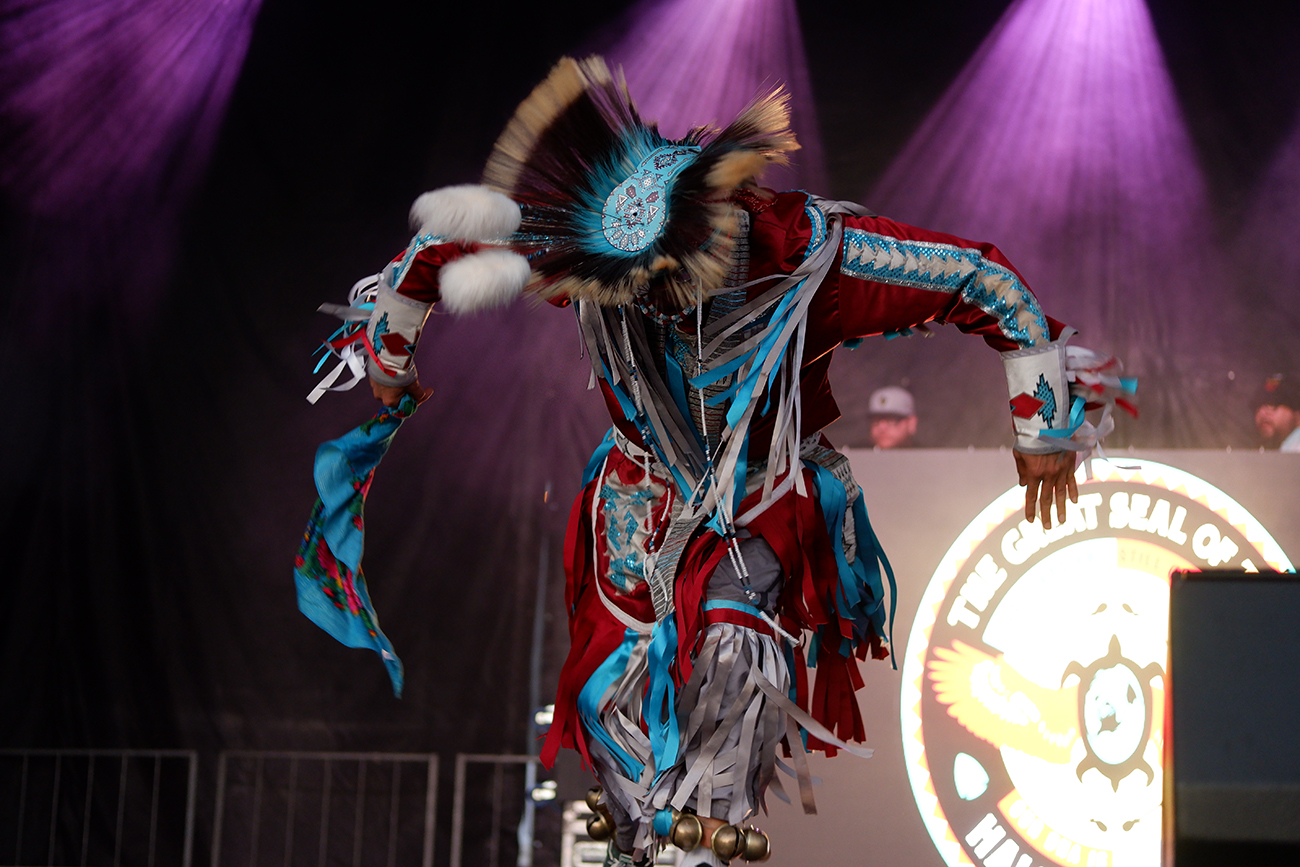 Filed Trip is a staple summer event for Torontonians. It is an event that takes over Fort York National Historic Site and welcomes people of all ages with programming for children and adults alike. The two stages are separated by a healthy distance with the children’s day camp in the middle. This year the second stage was located inside the historic site, surrounded by monumental buildings, and off to the side of it was a circle pit of lemons, to perhaps inspire creativity, or make lemonade … or (as the children did) throw them up into the air and at each other.

The event aims to bring people together as a community in a friendly welcoming environment that embraces music, art, creates space for discovery, and embraces the roots of the city. The gates opened quite early but it was a big weekend for Toronto with multiple events happening throughout so people were strolling in slowly, but those who came, showed up. 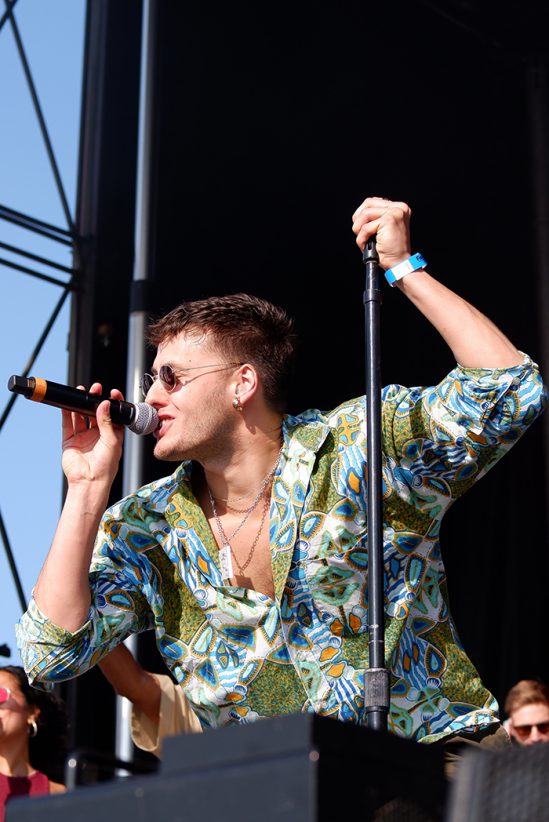 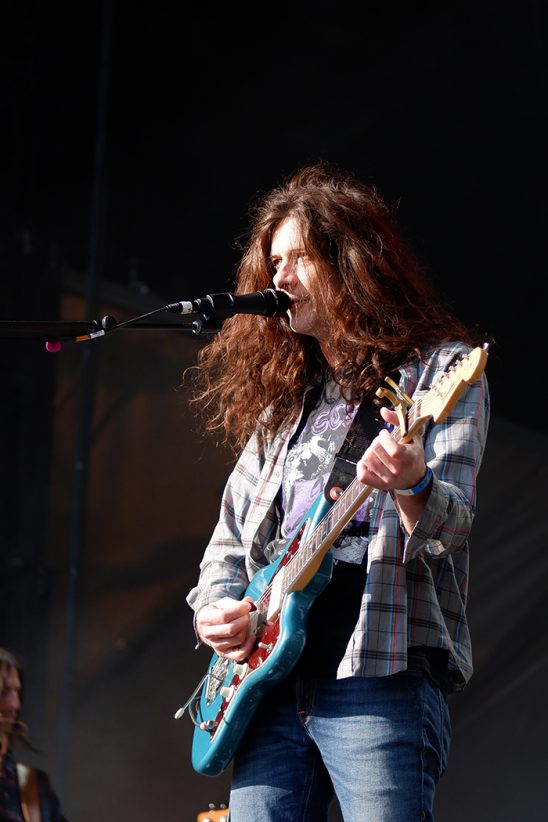 Montréal’s Busty and the Bass took the stage in the early evening for their fun blend of electro-soul and occasionally hip hop. Alistair Blu was leading the stage with the vocals, occasionally stepping away to make room for guest vocalist Mel Pacifico or to play keys. The band recently released a new EP, KARNEVAL, so naturally, we got to hear a wide range of tracks from that. Overlapping on the opposite stage was Kurt Vile and The Violators with Kurt Samuel Vile at the forefront, hiding under a mane of hair, softly speaking/singing into the mic, sharing his latest release (watch my moves) with the excited fans. 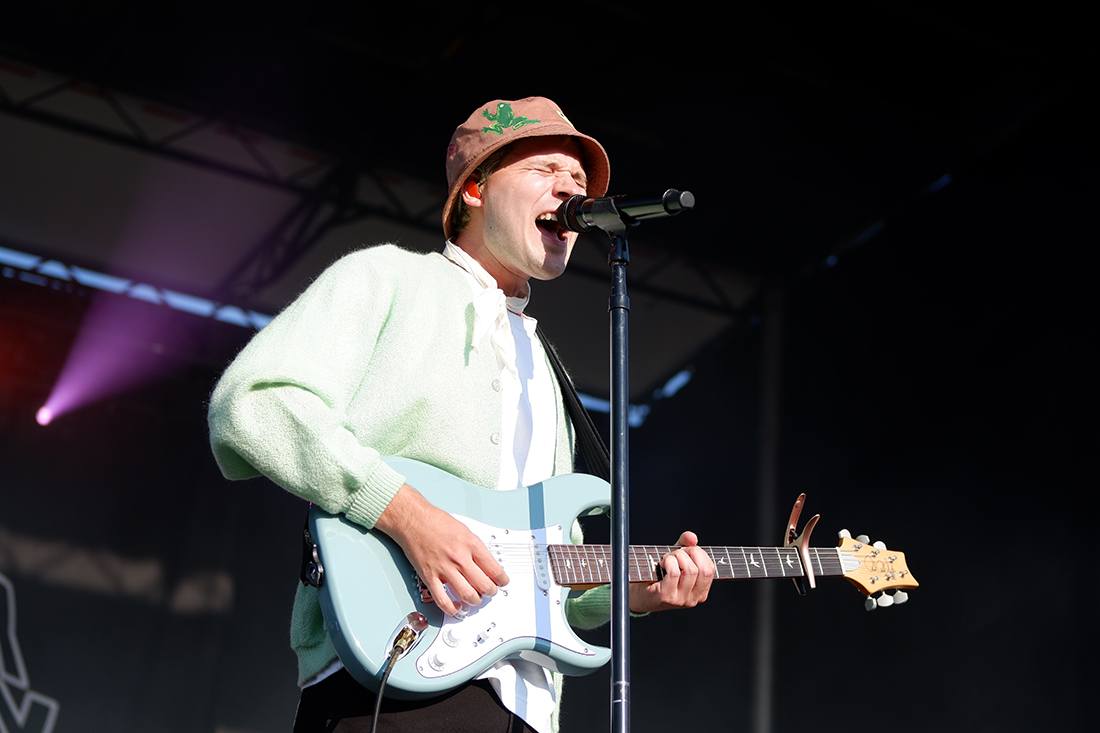 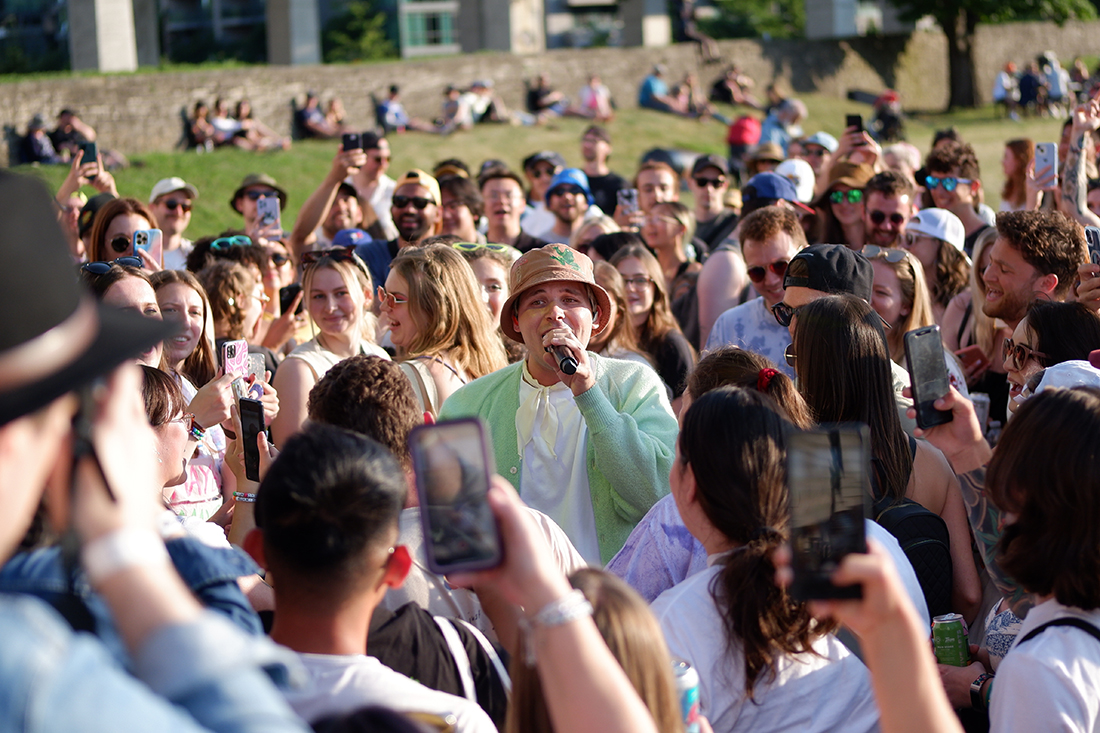 The evening continued with indie pop quartet Valley who immediately flooded the stage with their contagious energy. After Kara James jumped on drums Rob Laska stepped up to the center to perform “Oh shit…are we in love?” eventually jumping into the pit to dance with the singing crowd. The band played through a handful of tracks from Last Birthday (The After Party) with Kara occasionally coming out to sing. As Valley’s performance was coming to an end the crowd promptly moved to the main stage for Vancouver’s Peach Pit. The lemons were now mush spread around the park giving off a subtle citrus scent.

Peach Pit seemed to be the most anticipated set so far with people crowding in tighter and the photo pit packing in one by one with excited photographers. Neil Smith (vocals, guitar) seemed very calm and collected, even while whipping his hair dancing around the stage, and jamming with the band. Their chill shade of indie and surf rock is well known with this audience many of whom were gleefully singing along. The band has released an album this year, From 2 to 3, but what got everyone going was of course “Alrighty Aphrodite”. 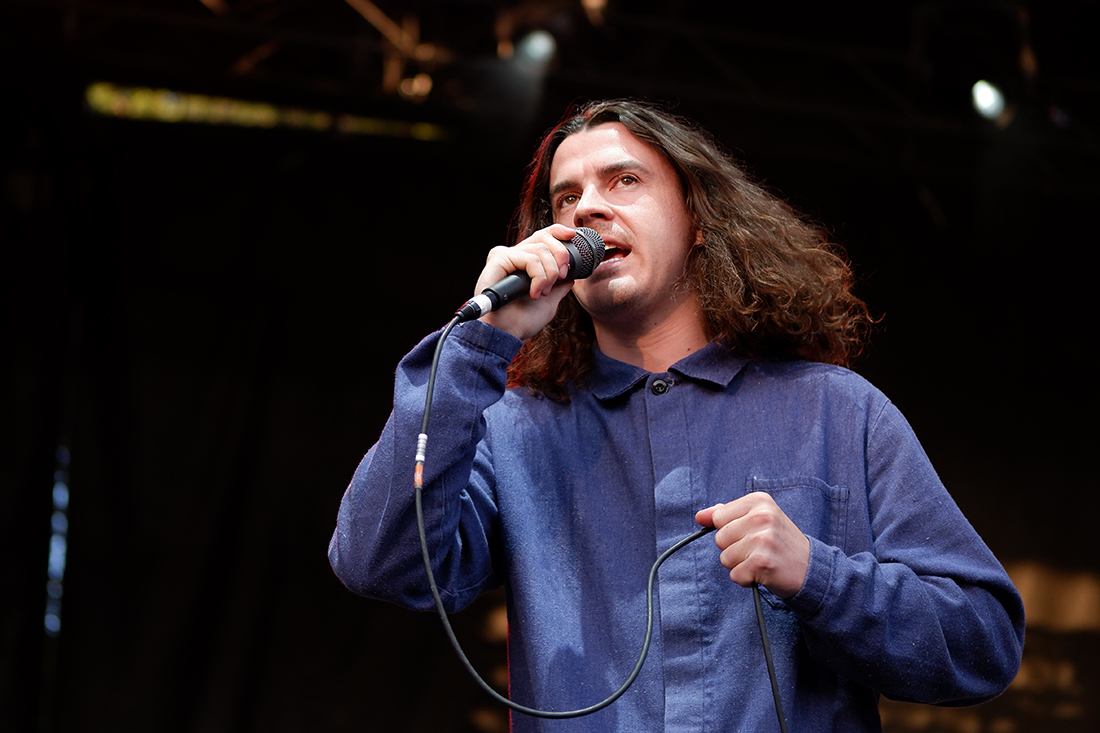 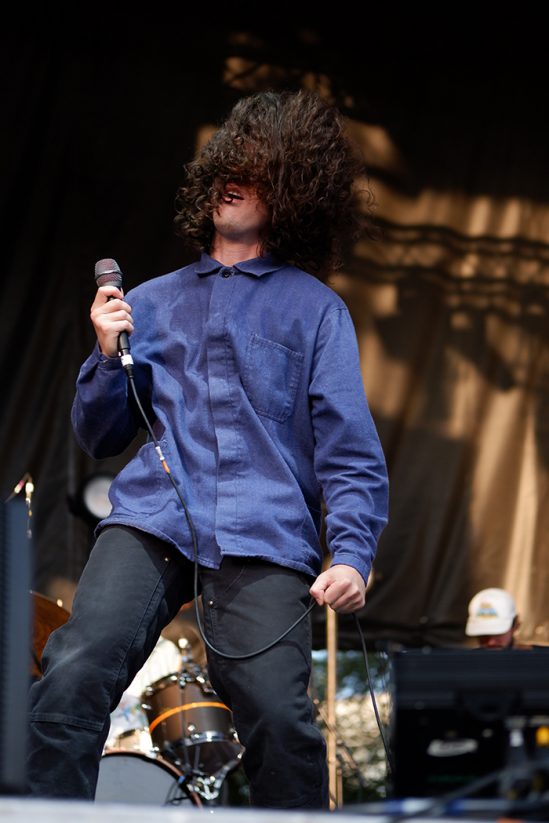 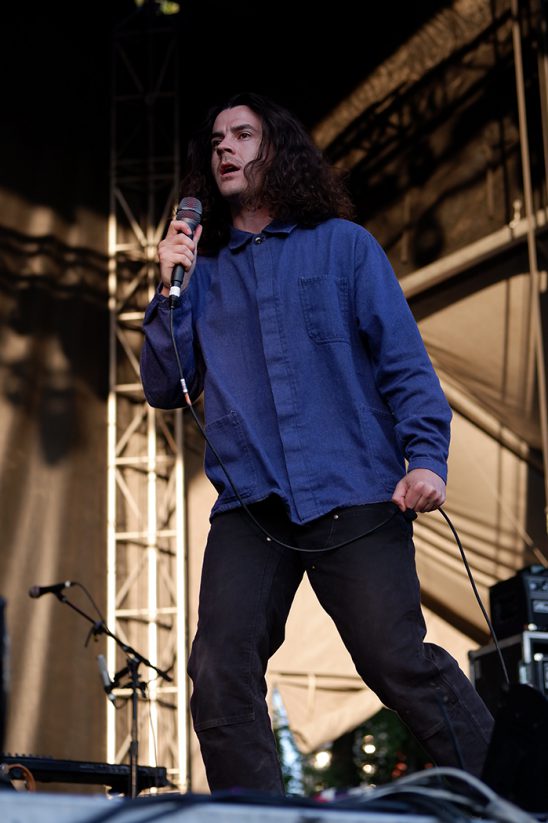 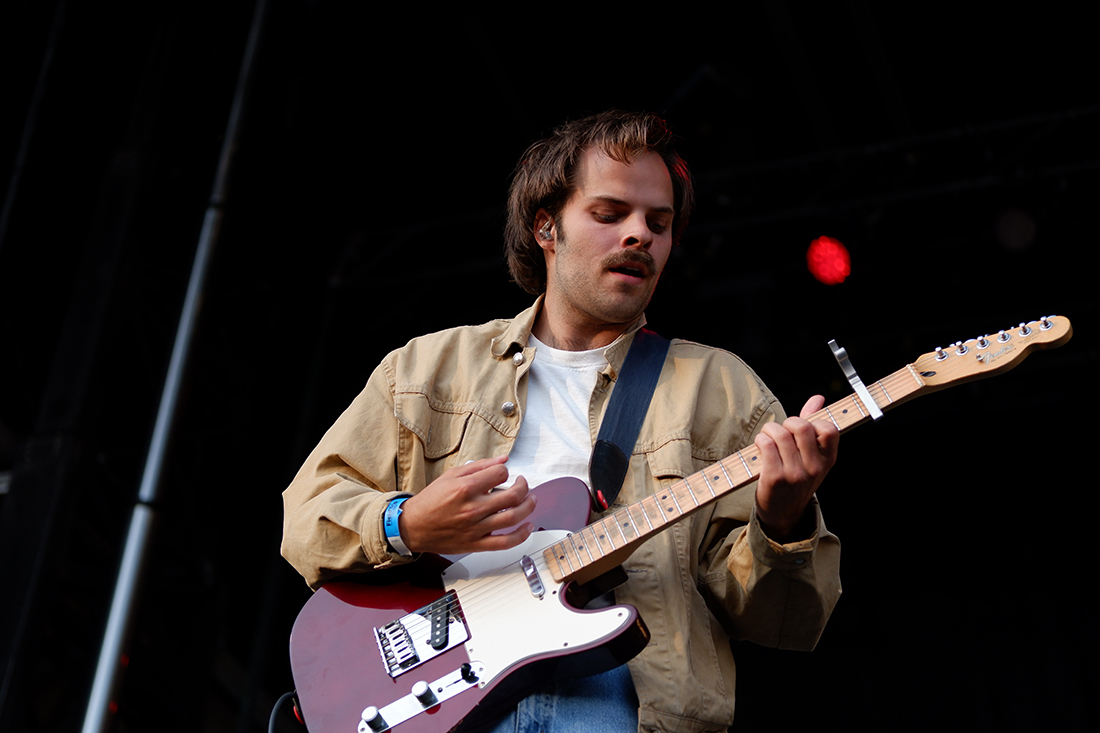 The energy was rising and the sun was heading for the hills but the overall vibe across Garrison Commons was still very, very chill. The Halluci Nation, formerly known as A Tribe Called Red, began their set on the opposite stage playing to a smaller crowd. Tim “2oolman” Hill and Ehren “Bear Witness” Thomas are an electronic duo who produce a blend of hip hop, reggae, and dubstep-influenced tracks with a high emphasis on the music of First Nations Peoples. Their music deals with a lot of heavy issues Indigenous communities are continually faced with and in an interview with CBC 2oolman admitted We are the Halluci Nation (2016) was a “pretty mentally and spiritually draining album to make because it really dealt with a lot of hard things”. The latest record, One More Saturday Night, was released under the new name The Halluci Nation (inspired by John Trudell’s poem by the same name), it was the stuff of superheroes and outlaws. This record is a recharge in a new direction but by no means does this direction deviate from their roots and beliefs.

Set at the back of the stage behind a large video screen you could hardly see the duo but that was just the start of this mind-blowing set. For a good part of the show, the screen was showing mixed cuts from popular films – cuts showcasing Hollywood’s perceptions of the ‘Indian’ – the perceptions we are still working to dismantle. A few warm-up songs in 2oolman and Bear Witness were joined on stage by two dancers carrying the flag with the band’s logo: “The great seal of The Halluci Nation / 500 years and still drumming” lines of text wrapped around the turtle with eagle’s wings. 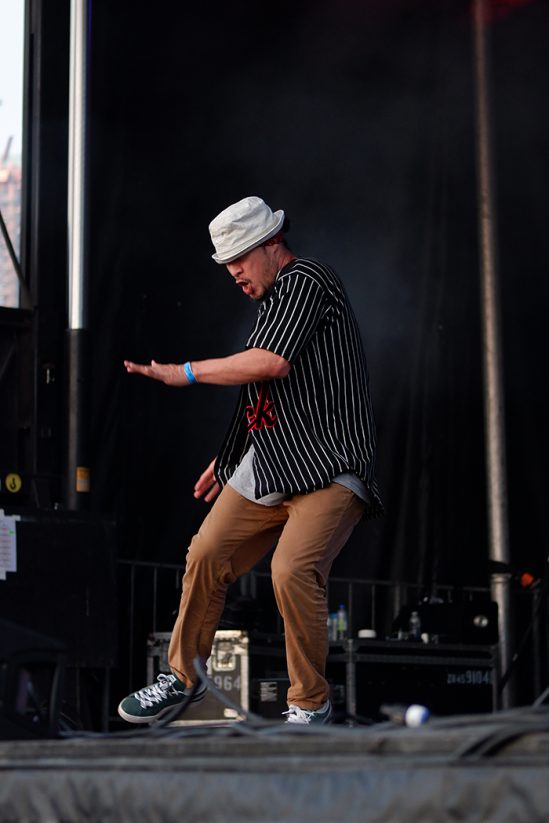 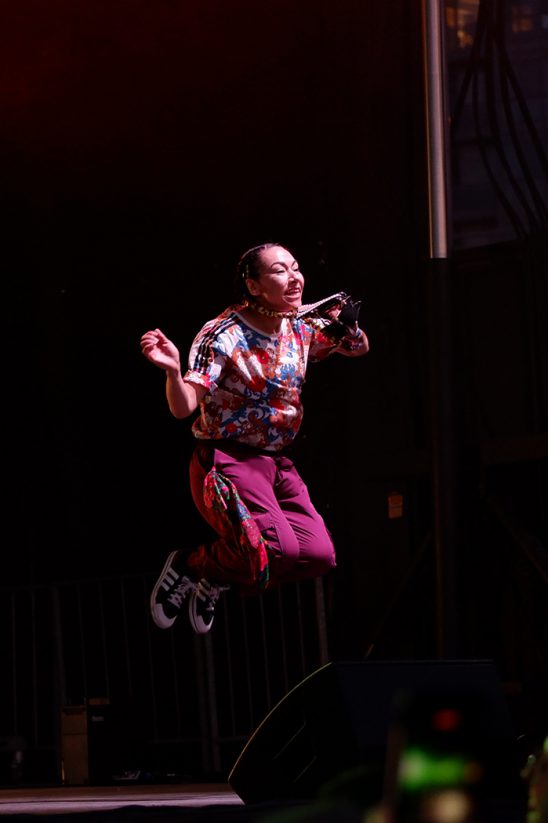 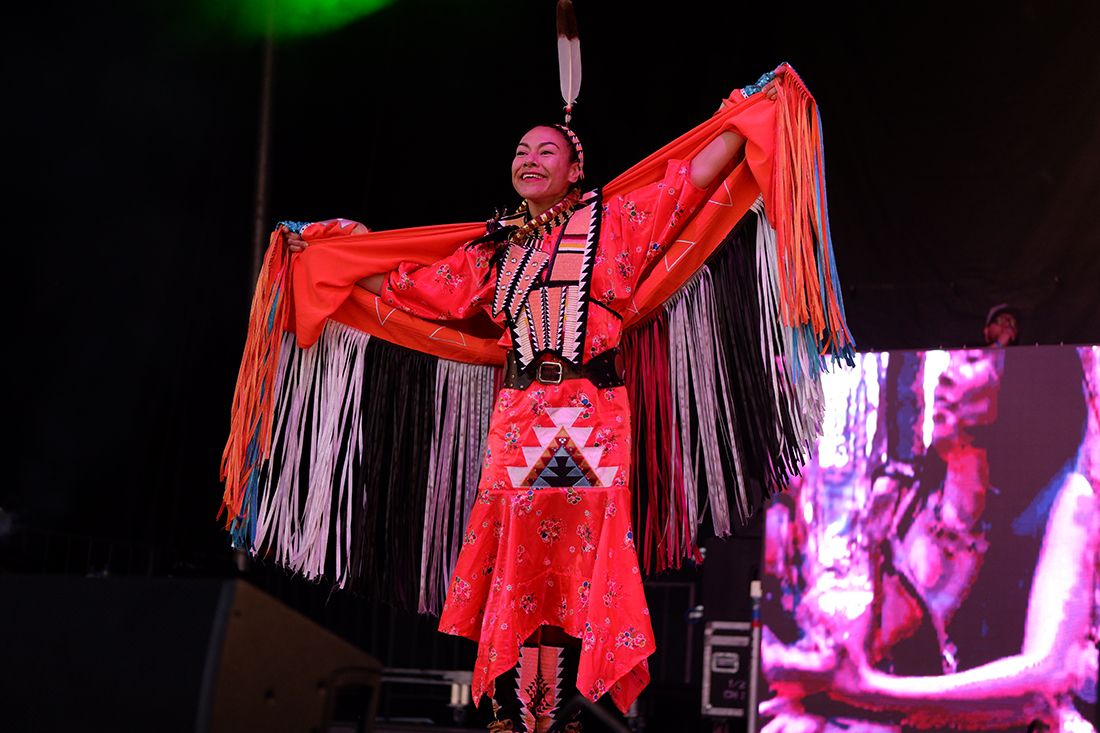 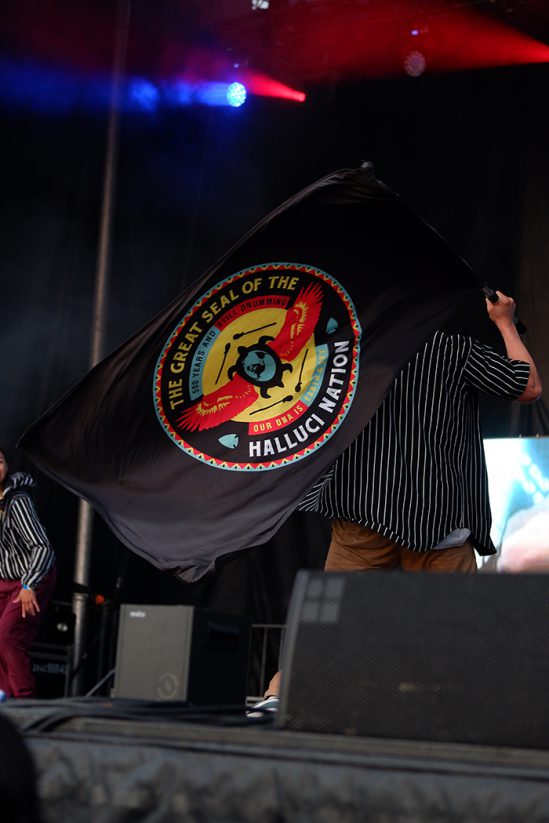 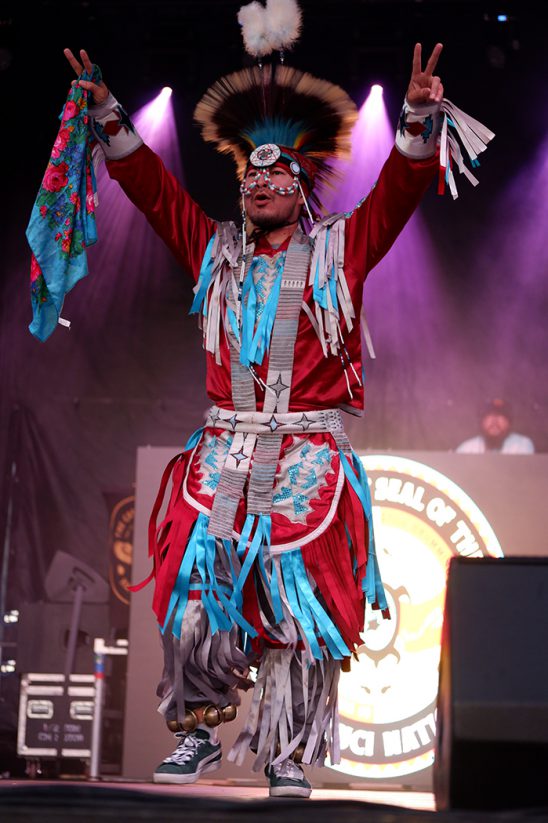 The dancers quickly became a prominent component of The Halluci Nation’s set performing traditional dances, breakdancing, hyping up the crowd, and waving Kookum scarves (spelling varies; there is a long history between Indigenous Peoples and early Ukrainian settlers). Midway through the show, the duo invited out a couple more surprise guests: Haviah Mighty and Odario to perform “Ba Na Na”. Naturally, the crowd went wild. Seeing all this talent on one stage was heartwarming and electrifying for everyone involved, “this is the first time we’ve all been on one stage together” pointed out Odario in disbelief.

By all accounts, The Halluci Nation played a headliner set and no energy could’ve matched theirs after, so for many of us, this was the high point and the end of the great return of the Field Trip music festival. Until next year. 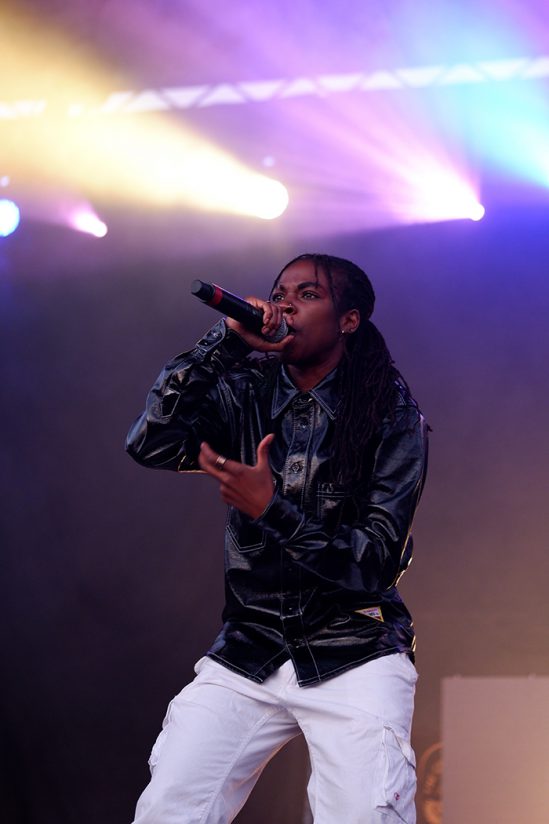 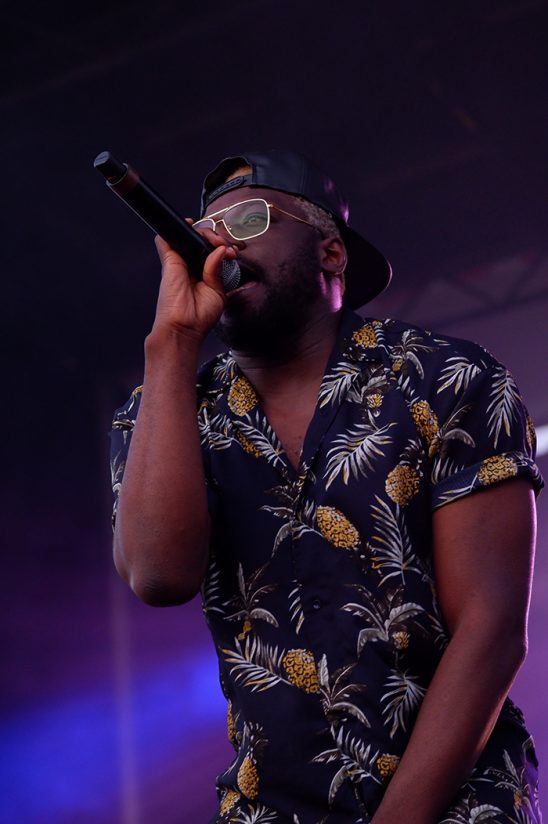 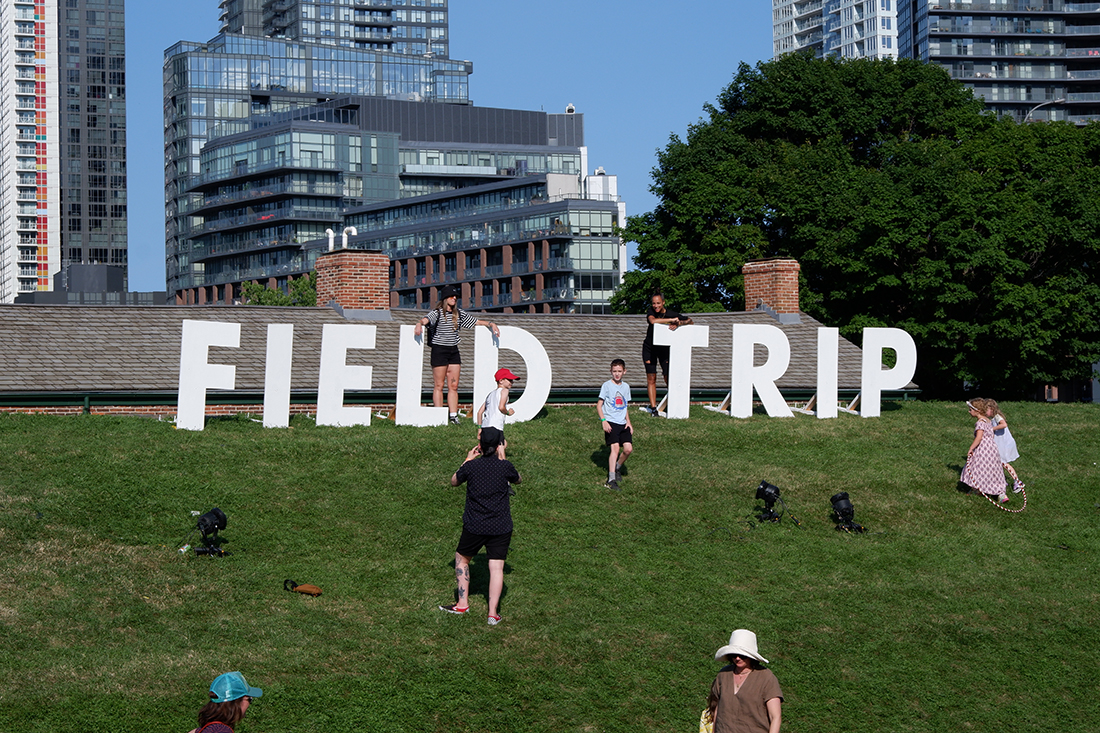