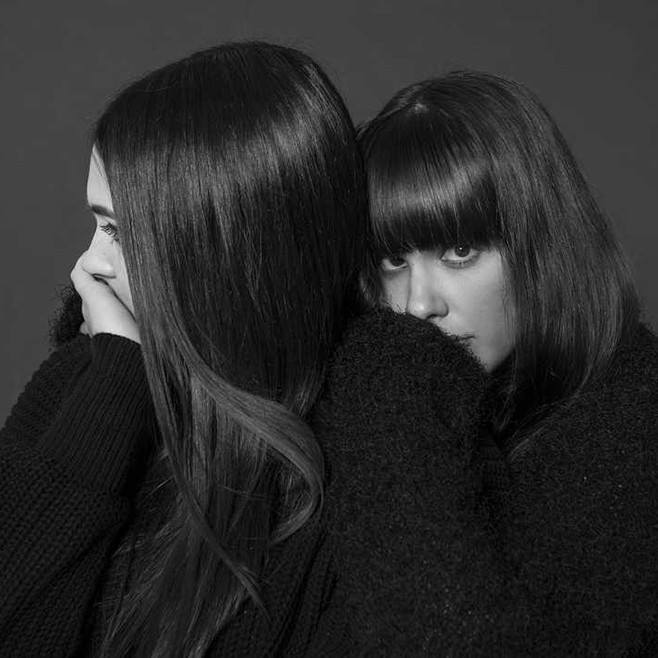 The blissed out techo-pop of Montreal’s Milk & Bone seemed like it was made for the space at Constellation, where the duo of Laurence Lafond-Beaulne and Camille Poliquin performed on Friday, April 7. The space is a contradiction, a haven of quiet, mellow cool abutting a busy street leading to the highway. Lately, the stretch of Western Avenue that it sits along feels crowded and taken over by construction, but the venue is spacious, intimate and imbued by hazy red lighting in the entrance that sets the tone for concerts taking place.

Local musician Jessica Risker (also known as Deadbeat) kicked off the show in a simple, beautiful way. The seated crowd surrounded her on three sides. She began her set by strumming and singing blissful melodies accompanied by imagery projected on a screen, harkening back to an earlier place and time. It reminded me a good deal of the background projections at an Arcade Fire show, slightly odd, very captivating; movement in a way that looked like an optical illusion.

Risker finished up her set with one of the most unique performances I’ve ever witnessed. She played 20 lullabies she composed for her family’s newest addition, rolling them through the music box apparatus playing the notes before they floated quietly to the floor, a pile gathering beside her. It was a hypnotizing display that set a mood of pristine, melodic calm before Milk & Bone took the stage.

Camille and Laurence entered the performance area just as Risker wrapped up her calming, inventive set with an air of sophistication that spoke to their Montreal provenance. Laurence in a messy bun and Camille draped in all black, they set up their gear and played their first notes and as the crowd returned from the bar and settled in their seats. A sparse set up – two keyboards, two sound mixers, and two drum kits – was all the girls needed to create a spectacle befitting their mellow music. “Coconut Water” kicked off the set, with its sweet synth beats and lyrics filled with longing. Milk & Bone’s songs spin tales of romantic daydreams, the perfect accompaniment for a cold Chicago evening. Their performance let the vocals take center stage, Laurence’s voice showcasing a soaring sweetness and Camille’s a dazzling, jazzy quality.

Singer Camille announced early in the performance that this was her first show in 10 days, after overcoming an illness that put her on vocal rest for days. The haunting, harmonious vocals filled the space, especially in the performances of songs like their latest single “Poison”, the upbeat “Daydream” and the final number, “New York”. The aching anguish of losing a romance to the big city, and further shutting the door by moving was on translated beautifully as Laurence, with her agile voice, swooned wistfully over the song’s lingering notes.

A truly endearing moment of the performance is the joy that clearly registered on the faces of the women when members of the audience started to dance on stage to their songs. Camille cried out, “Nobody does this!” when the group started swirling closer still as they grooved along with “Shore” and “Watch”. The final number was made even more special when Milk & Bone invited the audience to sit on the floor of the stage with them, the participants no more than 5 feet away from the performers.

The duo recently performed at SXSW in Austin and create music that feels personal, yet relatable to that legion of us who work through heartbreak by listening to that particular song or album that strikes a chord. Be on the lookout for these two.