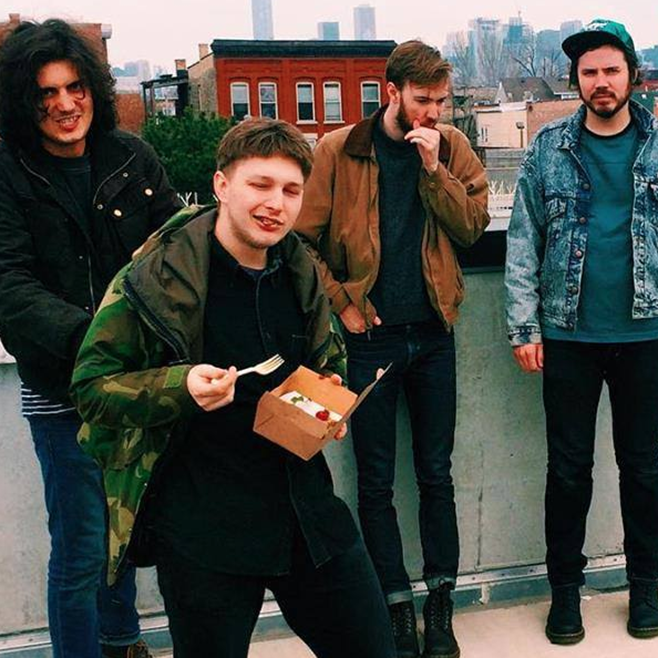 While Mississippi Studios has become a reoccurring waterhole in my life, last night was extra special because I was getting a little taste of sweet home Chicago. The boys from NE-HI are currently on a pretty massive tour in support of Offers, their second studio album which was produced by Dave Vettraino and distributed by Grand Jury (who also reps Twin Peaks and Day Wave to name just a few). Half of the band is clad in Bulls gear due to the playoffs and it’s almost like I’m back at The Empty Bottle. Oh how I’ve missed the web of the garage rock scene in Chicago.

NE-HI takes the stage and there’s no messing around. They launch into “Sisters,” which was one of their first singles on Offers. “Sisters” morphs into “Prove” (while Jason Balla and Mikey Wells shake their guitars towards the amps to create a distortion) and then they hit the crowd with the song that started it all, “Since I’ve Been Thinking.” As the set progress the boys become possessed. They’re thrashing and writhing all over the stage and the energy they exude is palpable. Next up, they make a dedication to Sean Page, a long time friend and local musician here in Portland who performs under the moniker Mantra Blues.

The set list continues with “Buried on the Moon,” “Drag,” “Offers,” “Reach,” and they close out with “Stay Young,” quite possibly the most popular track on their sophomore project. The gentlemen of NE-HI have been at it for a few years and they are finally getting the recognition they deserve. It was also revealed that they would be playing Pitchfork Music Festival this year. This is a surreal experience for a Chicago musician. The boys’ passion and talent have begun their propulsion towards notoriety and it’s really exciting to watch. NE-HI will be touring until mid July so I highly suggest if they’re playing in a city near you, you make the trek out. It’ll be an experience on par with watching televangelist speak in tongues.