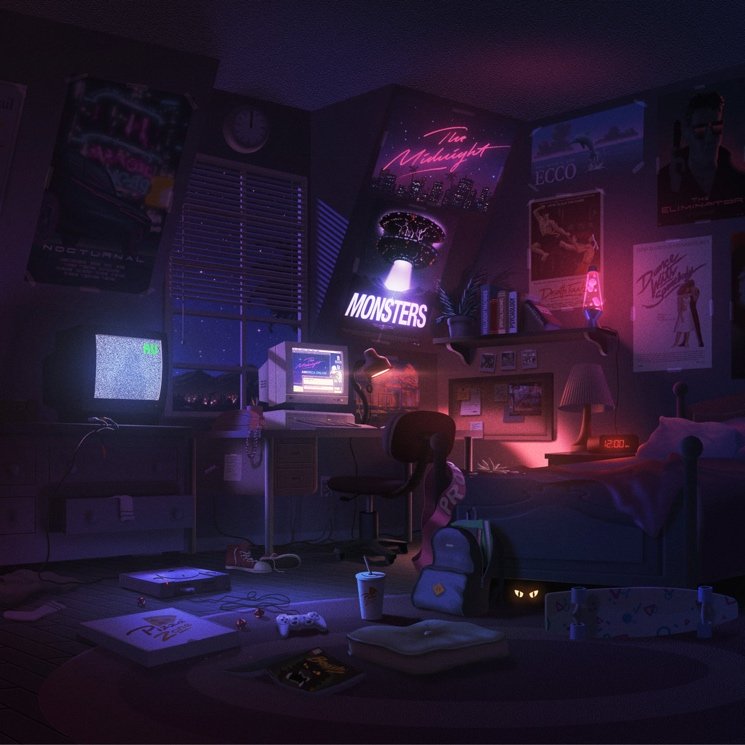 The Midnight’s new album MONSTERS, released on July 10th, is an ode to the teenager and all the problems that come with them. The duo behind The Midnight, Tyler Lyle and Tim McEwan, present their audience with a synth-pop exercise in remembering, where the nostalgia slowly changes character from warm and fuzzy feelings of new experiences and first loves to alienation and confusion.

There is a feeling that the listener is in a teen coming-of-age movie, where the tempos and tones of the songs in the score are made to mimic the wavering intensity of adolescence. Due to the steady pacing of most of the songs, one can sense that there is an ending on the horizon, but there is no real consensus on what the ending would be. This is felt particularly strongly on “America Online”, “Dance With Somebody” and “Seventeen”. Just as with the rest of the album, The Midnight make use of voice distortion and tempo to create moods that are often conflicting: in the previously mentioned songs, excitement and feeling carefree coexist with fear and feeling disconnected. The contrast has the effect of making all the conveyed feelings stand out, which ties in nicely with the theme of the intensity of being a teenager.

While the album starts with slow pop melodies about fun and new experiences, it slowly becomes faster and sadder as the songs become about lost love and regret. Continuing to “Deep Blue”, “Night Skies” and “Monsters” have energetic and interesting instrumentals, but the actual lyrics are very much typical of pop break-up songs. Everything begins to almost sound the same, but it’s not all bad: the homogeneity makes it feel as if the sun is beginning to set and like as if it is time to move on. By the time the robotic voices of “Night Skies” begin to sing and the last song on the album, “Last Train”, is reached, we’re on an evening train ride to a strange new place.

Overall, in MONSTERS The Midnight is able to creatively frame the highs and lows of being a teenager, all in just fifteen electronic pop tracks.