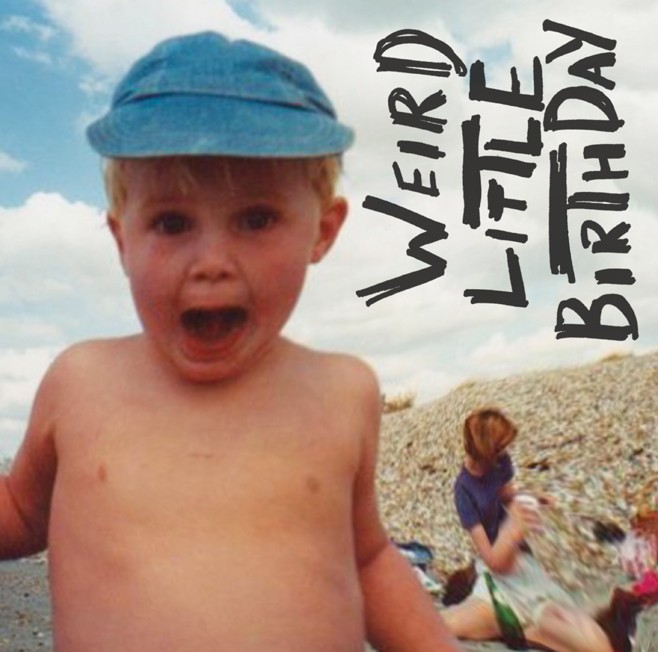 Weird Little Birthday, the full length release from Happyness, is out this Monday, June 16th. It’s simultaneously a very fun, melancholic, chill, moody and upbeat offering. The description may suggest that it’s all over the place, but it’s just the opposite. The combination of the varied  tones and textures of the music and vocals mesh in such a way that it creates a cohesive, flowing listen. It is a quasi-concept album that keeps the listener on their toes. Our narrator, thoroughly pissed off to share a birthday with Jesus, slowly starts to unravel as the album progresses.

The opener “Baby, Jesus (Jelly Boy)”, is a slow-moving lament, but works as an introduction to the overarching Happyness vibe – a little slow, but engaging in that sly way. Lyrics like, “Don’t steal my thunder, baby Jesus”, display a semi-meditation on growing up, of teenage and young adult angst. Statements like those are presented in a tongue in cheek way, quietly side-stepping anything that can be construed as too offensive.

Quip spoke with Ashley, Benji and Jonny (aka the men of Happyness) earlier this year. Their personalities truly shine through on the full-length album. They are really funny, pretty charming, slightly laddish, but generally easy-going and a hoot to chat with. Same goes for listening to Weird Little Birthday, by and large.

“Naked Patients” shows shades of Wilco influences – this song is reminiscent of the Chicago band’s “Kamera” in the best way. The guitars gently push it along; it’s both very rhythmic and subtle. The odd first line creates a quirky interest (“Something so funny about a sick body and the things that it does that it shouldn’t do”) and the rest of the tune doesn’t disappoint.

The next song, “Great Minds Think Alike, All Brains Taste The Same”, is a somewhat man-childish take on a relationship, brimming with thoughts like, “I’m a sucker for this domestic shit” and “the more I talk to you, the more I like my dog”. It’s followed by “Orange Luz”, a track featured on the band’s EP. The tone and feel of the song lines up nicely with the opening track.  The swell of guitars toward the end of the track sets it apart.

The next song signals a shift in the sound Happyness puts forth thus far in the record. To start, “Refrigerate Her” is a fairly startling name for a song. It definitely has a punky feel, with analog-ish vocals and garage-band guitars. It’s a short burst of raw energy in the middle of ambient to mid-tempo indie pop. It’s cool (pun intended? Sure). The album returns to neutral with “Pumpkin Noir”, featuring vocals from Ed Harcourt. It captures a similar feeling that “Orange Luz” does – both sound a little desolate, a little lonely. It also has echoes of that slight country twang. The lyrics declare that our raconteur is, “a 21st century hand grenade” – and with a line like that, it’s clear to see that the our Birthday Boy, born on Christmas, is starting to lose it.

“Anything I Do Is All Right”, on the other hand, picks up the pace and is a little dark. One can definitely hear some minor chords in there as the boys riff and drum away. The track comes complete with a dark, sweet little hook. Contrasted with the slower tracks, it really rounds out the band’s sound and displays their agile versatility.

The standout track is “Weird Little Birthday Girl”, signalling a return to the birthday theme on this concept album that is but isn’t. It’s a really lovely little instrumental – dare I say sweet and endearing. It’s pretty and plucky. It feels almost shy compared to some of Weird Little Birthday’s other songs. It still contains their signature quirky, at times biting, lyrics, but they fade a bit to the background of the soundscape of this track. “Weird Little Birthday Girl” is yet another iteration of the Happyness “love song” – funny, a little sharp lyrically, and really easy on the ears. It’s trailed by “It’s On You”, a stellar song from the EP. This is the most poppy, hooky track in the Happyness repertoire. It showcases them at (arguably) their best – rambly lyrics, great steady beat, bright guitars and clear, distinctive vocals.

The album wraps up with a few quieter, yet still distinctive tracks. “Regan’s Lost Weekend” is soft and lilting. The addition of the piano is really nice, it adds a unique layer in comparison to other tracks on the album. The soft, almost indiscernible vocals of “Lofts” adds to the ambience. The mood feels a little bit more worn down and sullen at the end of the album; there’s a hint of resignation. A sullen vibe. Weird Little Birthday comes to an end with “Monkey In The City”, yet another slower, twinkly tune.

Overall, Happyness presents a record crackling with personality. Stylistically, it covers a fair amount of ground, markedly with its mixture of varied tempos. It’s an indie record that shines with moments of sheer pop sensibility, hints of veering into some alt-country territory, with a touch of moody garage rock brought in. It’s a mature record with some less than mature themes, (getting dramatically upset about sharing Jesus’ birthday) but that irreverence makes it all the more interesting. These kids from South London are really on to something.