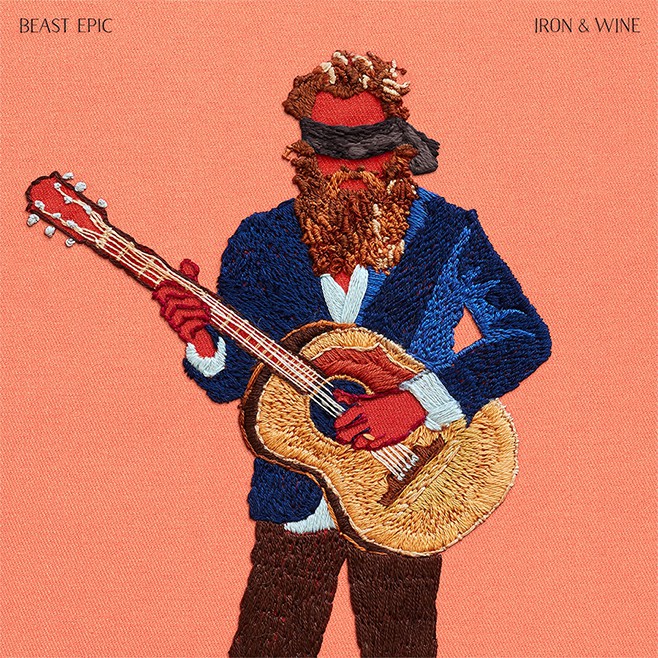 Beast Epic, the sixth album by Iron & Wine, marks a self-described revisiting of the past. How so? First, it’s put out by Sub Pop, his first record label, and, secondly, in terms of sound. Recording everything live and employing minimal overdubbing gives the album a warm and intimate sound.

What does it sound like? To me, it could easily be on a playlist with Nick Drake, Bon Iver, Passenger, and Lord Huron. This is an album that you would play with the windows down on a warm summer night driving on a country road singing along to loudly (although perhaps not well). Or perhaps you would listen to it around a campfire with friends drinking craft beer or chilled wine, grooving your head and quietly singing to yourself with repressed feeling.

What does Beast Epic mean? Apparently, a Beast Epic is “a long, usually allegorical verse narrative in which the characters are animals with human feelings and motives”. But why name a warm and lovely-sounding album that? It makes it sound rough and scary – and it’s anything but.

“Mostly because it sounds really fucking cool!  However, with that said and perhaps to be completely honest, ‘a story where animals talk and act like people’ sounds like the perfect description for the life of any of us.  If not that, then it’s at least perfect for any group of songs I’ve ever tried to make,” explains Sam Beam, the man behind Iron & Wine and thus behind Beast Epic itself.

This is a mellow and enjoyable album. The lead single, “Calling It Dreaming”, is the standout track and deserves to be heard a lot this summer. In fact, the album could act as a summer soundtrack (see late night drives and campfires above) and that maybe is its weakness. Aside from the lead single and a couple of other tracks, it has a certain sameness to the sound, which means the songs blend into one another, like a soundtrack can. It could have used more of the “beast” afforded by the title.