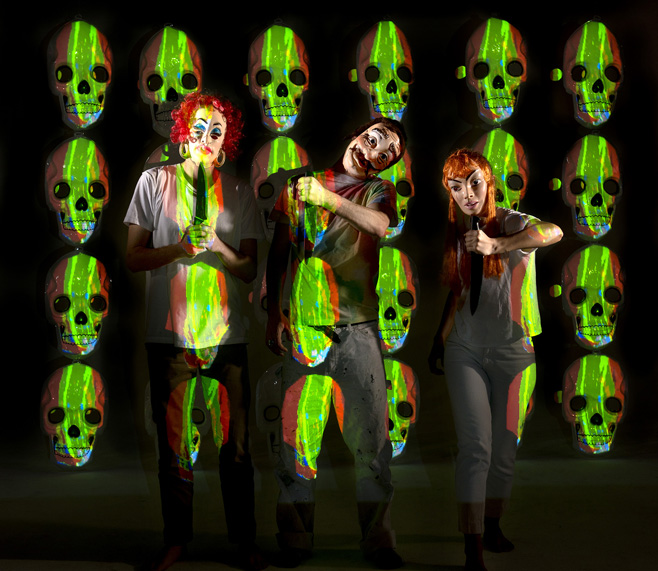 Anyone familiar with the sonic shape-shifting of Animal Collective is well aware that this is a band that can’t sit still. Now, that restless ethos has lead principal songwriter and sort-of frontman Dave Portner (aka Avery Tare) to form a new band. Featuring Angel Deradoorian (ex-Dirty Projectors) on keys and Jeremy Hyman (ex-Ponytail) on drums, Avey Tare’s Slasher Flicks emerge from the hallucinatory fog of a Halloween party gone awry to make music that “comes from a place that’s not human.”

The band’s infectious new record, Enter the Slasher House, has all of the hallmarks of Portner’s mercurial sound: fractured pop melodies driven by kinetic rhythms, goopy synths, and ghostly vocal samples dripping with anxious glee. But despite the sinister overtones, there’s a sense of playfulness on Enter the Slasher House that bends the album’s sound and sensibility through the warped light of a funhouse mirror.

Take first single “Little Fang,” whose video (directed by Portner’s sister, Abby, and featuring a puppet haunted by ghouls) perfectly captures the album’s collision of the campy and the surreal. The song itself is one of Portner’s most immediate and strangely-touching songs to date, a breezy pop gem celebrating quirkiness and resilience in the face of harsh realities. Its casual, relaxed feel is one rarely found in Animal Collective’s more overtly experimental tendencies.

Elsewhere, the music on Enter the Slasher House is more exploratory and harder to pin down, marrying a raw, unhinged garage band aesthetic to the freeform spaciousness of jazz, as on album highlight “An Outlaw.” It’s a surprisingly accessible sound that feels streamlined and spontaneous, open to improvisation and flux. Right from the first track “A Sender,” with its pulsing beat, modular synths and creaky guitar lines, the overarching feeling of Enter the Slasher House is of confidence, chemistry, and a distinctly psychedelic swagger.

Quip spoke with Portner while the band was preparing to kick off a van tour  in Denver, and he sounded rejuvenated and excited to be unleashing Enter the Slasher House on a live audience.

The album was recorded live, a decision Portner says had to do with a new interest in early rock ‘n‘ roll, like Bo Diddley, Buddy Holly or Chuck Berry, and a fascination with early recording techniques. “A lot of that was captured in a really primitive way. When you think of the band setting up in this really simple room, putting up a mic for the drums, and it being about capturing it in the take, and jazz being about that too, just getting the energy down.  Because there’s something that happens in those early takes… something you can’t recreate sometimes.”

“[In] a lot of modern music, that space is gone. So much is electronic and direct now, and based on plug-ins and computers, that there’s a sense that we’ve lost the art of capturing the way a room sounds.”

For Portner, it’s all about balancing this live spontaneity with the desire to experiment with sound. “I love the production side of music, things like The Beatles, and how old psychedelic music was produced and recorded.” The end result is an album that sounds like the work of a single unit, its three parts – guitar, synths, and drums – separate strands that weave and intermingle as the songs unfold. And on the frenetic future-punk of “Blind Babe” or the strobed-out groove of “Strange Colores” the live sound is so visceral it feels like the band is about to burst right out of the speakers.

Slasher Flicks began in less lively circumstances when Portner found himself back in L.A. after a series of throat infections forced him to cancel a long string of shows for last year’s Centipede Hz tour. Reflecting on his state of mind while writing these songs, Portner describes  being disappointed in himself in not being able to fulfill a sense of duty. “Having all these touring plans and just being physically not capable of it made me start to think a lot about how the mind and the body really work together and how much of it was stress on my part, how much of it was just pure illness, viral or whatever.” And this period bubbles up on “Catchy (Was Contagious),” an Afro-rhythmic jam with a sun-drenched hook and queasy, processed vocals.

But rather than dwell on the darkness, Enter the Slasher House is remarkably upbeat and brightly-hued. When asked if his recent move to L.A. influenced the album, Portner went on to describe his experience of the city as being defined by such contrasts. “It’s hard to deny the fact that it’s sunny and there’s this very specific kind of weather and environment in L.A. all the time. L.A. is so tied into Hollywood, which to me translates into searching out how the horror industry ties into the environment. Because I’m so into horror films, the idea that this genre came from this place is really appealing to me. And that’s sort of expressed in the band, The Misfits, who have this song, “Horror Babylon,” and all these songs that reference horror movies. So that darkness seeps its way in.”

In a way, this fascination with the dark underbelly of idyllic escape has always been a part of Portner’s style. In the same breath as the above, he mentions Love’s Forever Changes – that L.A. masterpiece of late-‘60s innocence lost – as a personal favorite and formative influence since recording Animal Collective’s debut album, Spirit They’ve Gone, Spirit They’ve Vanished.

Portner’s love of horror is about something less tangible than gore, a darkness harder to define: “[Horror] is just an extreme genre and to me it becomes more like watching visual art. It’s almost about making it abstract, getting into the warmth of the colors and the texture of film and the lo-fi quality of a lot of those movies. And in the supernatural sense, it’s something other.”

For Avey Tare, music has always been about “taking the listener somewhere else.” Like David Lynch’s Inland Empire, a harrowing portrait of Hollywood that Portner says had a “profound effect” on him (despite its impossible-to-follow narrative), Portner’s work uses a kind of “emotional collage” to make the strange familiar.

And Enter the Slasher House is no exception, with its promise to take you “on a whole new ride” with its surreal artwork, meant to feel “like you were just walking around in the woods and came upon this weird cultish engraving.” It’s a fitting emblem for an album where weird is welcome and escape is always out of reach.