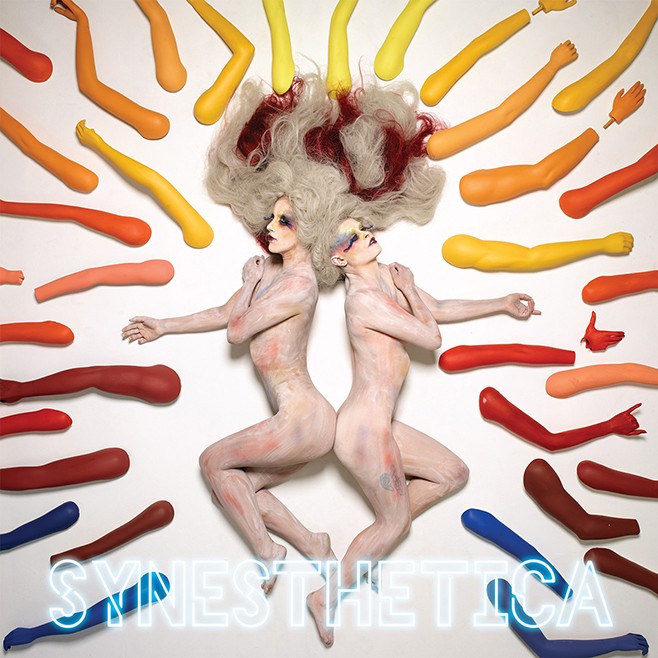 For years there have been two Radiation Cities: one that makes records of singular poignance and delicacy and another that blows away live crowds with power and energy. Which makes “Oil Show” – the funky, fabulous opening track on their new album, Synesthetica – such a thrill, because it gloriously unites both aspects of the band. It’s wildly different from their previous music yet instantly recognizable as theirs. The track could not be any more enthusiastic or inviting. “Oil Show” also revels in double-entendre. The almost imperceptible pop of the “d” at the end of “need” in the first line makes “he came in need” sound enough like “he came in me” to prick up your ears; by the end of “I come for you/You come for me, darling” just before the smack of the chorus, you know the band is having fun. Or suggesting fun. Or both.

That freewheeling and joyful vibe flows directly into the groove of the first single “Juicy”, perhaps the track which best sums up Synesthetica. Swirling elements of late-period Beatles, hard funk, and the playful “la-la-las” of 1960s pop make “Juicy” that rarest of beasts: a wholly unique pop song. It also fuses the band’s ability to evoke emotions both light and dark with their undeniable songwriting prowess. (For the former, see anything off of 2012’s Cool Nightmare; for the latter, “Foreign Bodies” or “Zombies” from Animals in the Median – both underappreciated pop gems.)

“Butter” has the melancholic beauty of Rad City’s gorgeous debut The Hands That Take You, but filtered through their new more muscular approach. Lead singer/keyboardist Lizzy Ellison’s vocals – at times near whispered, others fully throated, everywhere in between – have never sounded more rich or confident. The band seems acutely aware of how and when to complement her voice with that of guitarist Cameron Spies. On the ebullient “Come And Go” his casual, conversational vocals on the verse contrast perfectly with the arch of her powerful chorus; “Separate” uses both their voices and some clever turns of phrase to present both sides of a relationship in decline without a good guy/bad guy dichotomy. Elsewhere, the stomping funk beat and wiggly organ of “Milky White” and “Sugar Broom” suggest Cameo or early Prince as much as anything else.

Through 11 punchy tracks that feel unrestrained by expectation, Synesthetica reconciles everything Radiation City has ever done well. In interviews, members have suggested that the band went through a rocky patch and considered breaking up. The band contains two couples, one of which may have dissolved romantically; this Fleetwood Mac-esque recipe has worked for them so far and this record is their best by a mile, so whatever turmoil led to these tracks was – from the listener’s standpoint, anyway – worth it. It’s a rare example of a band significantly tweaking what they do and sounding fresh and new without abandoning the charm of what came before. Those hearing Radiation City for the first time with Synesthetica will have the delicious opportunity to experience their back catalog with fresh ears and note how far they’ve come in just a few years.