There was a lot going on in Brooklyn this past week. Nobody ignored the VMAs, and it’s what everyone was talking about, but the best music in the borough was happening at Commodore Barry Park. Afropunk Fest 2013 was a spectacle and cultural event. There were too many excellent performances to mention them all, but here are some highlights:

A big draw for Afropunk is the intersection of culture and fashion. Just head over to any coverage of Afropunk and you’ll see more pictures of audience members than bands. Afropunk is a celebration of self expression, what else do you have when you combine an iconic, in-your-face, and sometimes blocking-your-view hairstyle, with a musical movement that is as much about the scene as the music itself.

This year you could have spirited conversations with Black Studies professors about international aid and its intersection with post-colonial theory (and walk away feeling validated on both sides of the argument), hear about green energy and the misguided One project, while taking in local vendors, food trucks, and fashion from all the cool cats.

Once again the festival continued its tradition of having an absolutely useless performance schedule. Bands didn’t show up, or showed up at different times, but despite an occasional scheduling surprise the performances were stellar.

The festival opened for the second year in a row with The Skins, an overall-clad, big-haired lead singer who belted through a commanding showcase. She implored the early crowd to clap, to dance, and to get the day started right. Their set included an arena-rock/White Stripes sounding cover of “Black Skinhead.”

Day one was the punk showcase. The day started off loud and kept getting louder and nosier with every band. A couple of 13-year-old metal heads set the stage for Jada Pinkett Smith, who reunited her band for the festival and followed through with an angry noisy set. 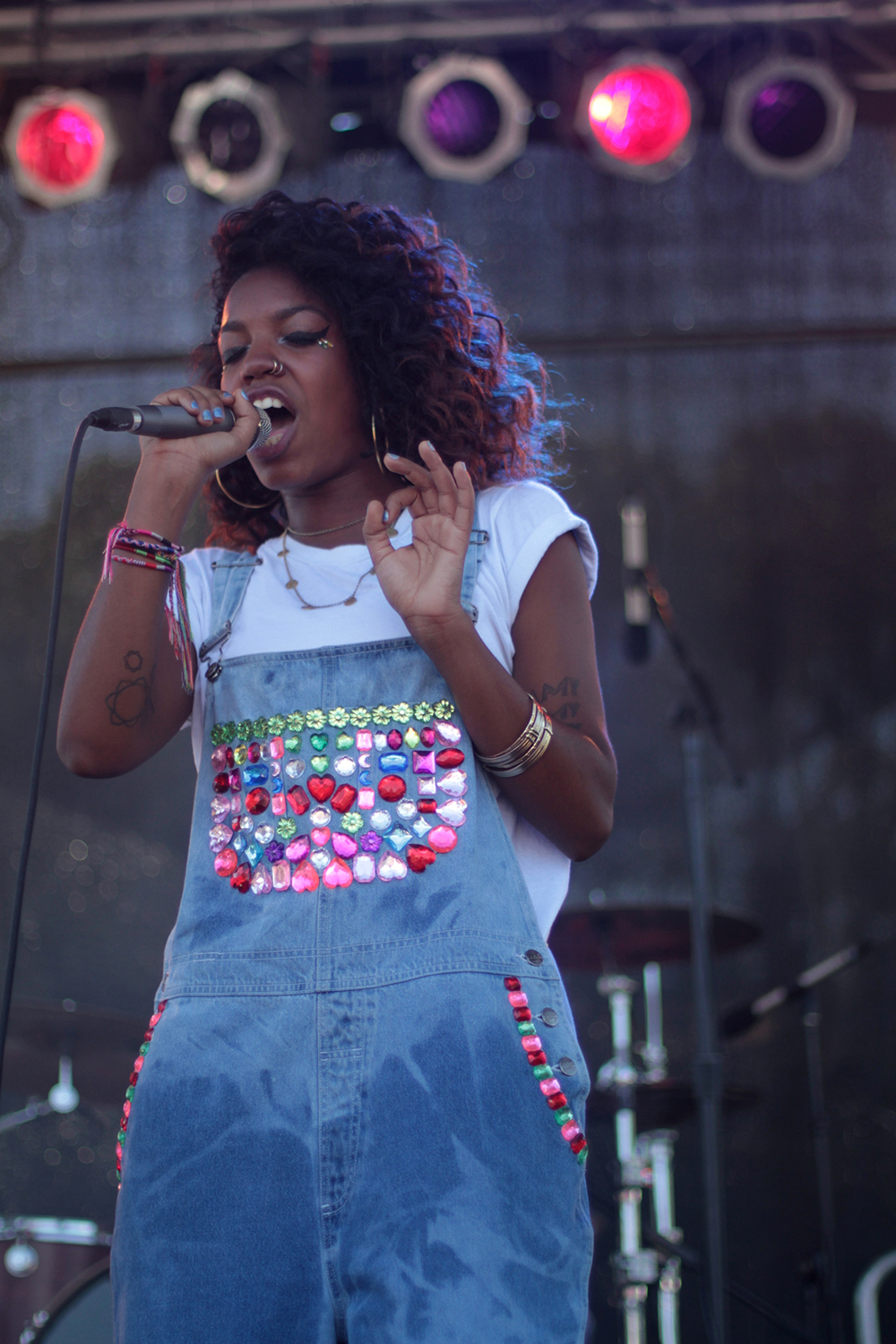 Theophilus London stole the stage with his antics. His performance seemed to be geared towards established fans, people familiar with his work and wondering about what’s next. The crowd got a little preview of new material with a lot more ’80s hints mixed in with some disco elements and a dash of  new wave.

Afropunk kept going hard, bringing artists with a lot of bravado to stages that couldn’t contain their energy. Day two started off early with crowds immediately  ready to dance. Big Freedia was a force, his stage performance demanded booty popping of at least ten different kinds.

Le1f garnered just as much attention the next day for his tweet decrying Macklemore (go look it up, form an opinion, engage the issues, and watch his video for “Wut.” Crawl down the YouTube hole and discover this artist) as he did the day of Afropunk. His performance was all kinds of unique. His rapping is like syrup drizzled on top of delicious beats, each song is an entire body dance, but nothing compares to what Le1f is capable of, putting any and all efforts to dance – this guy is goood.

While the VMAs stole the attention in Brooklyn for one night, the audience was better at Afropunk and the stage performers were devoted to those in attendance rather than celebrating themselves or appropriating another culture’s style. The festival highlighted both the next wave of hip hop, a conscientious and inclusive genre, and forays into guitar-heavy rock. Put it on your calendar, be there next year.