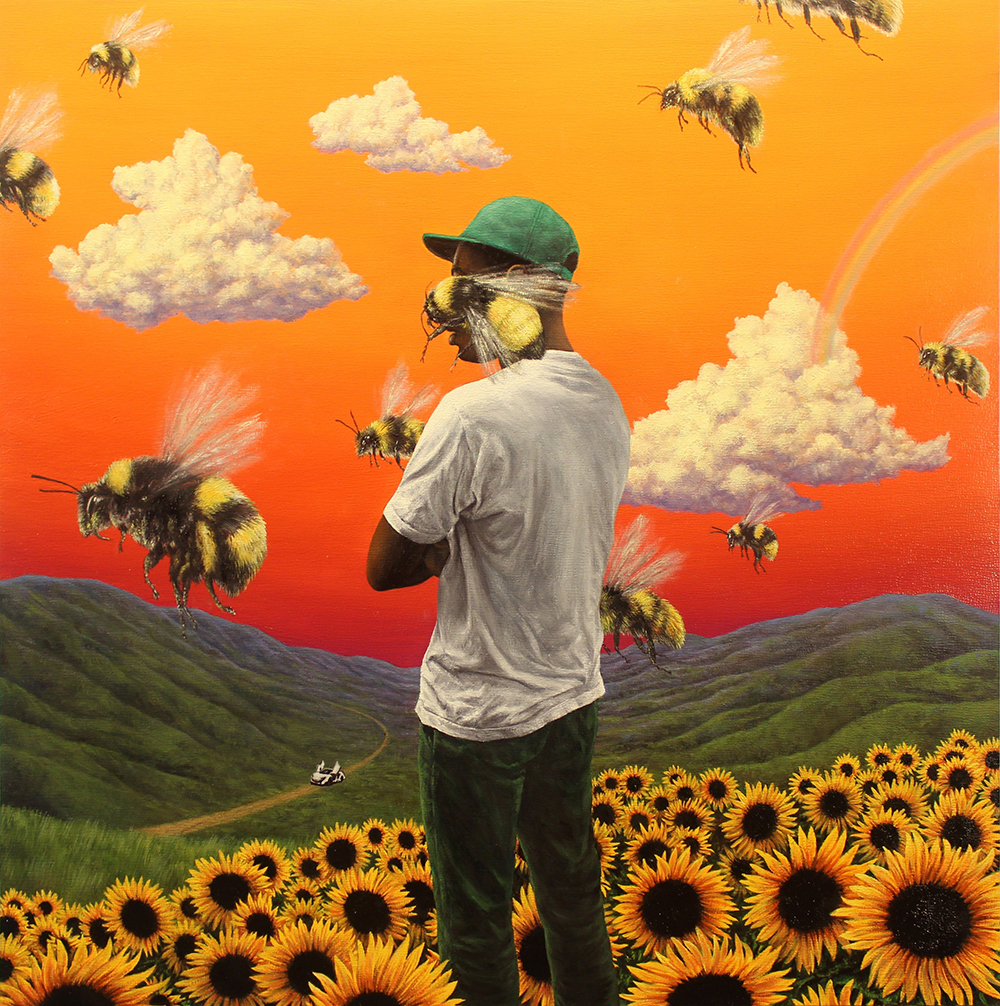 I’ve been a fan of Michelle’s music since she came out with her debut album Psychopomp. In fact, it was on my list last year. Let’s also commend the fact that this woman has been churning out an album a year and backed each one with an extensive tour. Soft Sounds From Another Planet gets a nod because it showed her maturity as a songwriter. SSFAP encompasses shoegaze along with these epic soundscapes that rush over you like a warm wave, like you’re dunking your head under in the bathtub. Perfect for a hazy evening filled with friends or the moment in the road trip when you enter a desert state and the sun starts to set.

We see another album full of maturity but also sticking to what he knows best. Tyler the Creator has dropped a little of his riotous, rebellious side and showed a softer, perhaps even sexually fluid side: ”I’ve been kissing white boys since 2004” Most of the maturity is seen in Tyler’s own untangling of personal issues. Loneliness (Boredom), toxic friendship (I Ain’t Got Time!), and sexual frustration (garden shed, glitter). They are sprawled across this album which, by the way, has been nominated for a Grammy. Tyler is trying to mature and he does it via lyrics and a cleaner, shorter album. (He also produced it.) We see much more methodical transitions, like the fact that “See You Again” is a radio request. We still see facets of the old Tyler that we love. Take “Who Dat Boy” for instance, this is the Tyler we fell in love with in “Odd Future”. He sticks to tradition by keeping track ten a two-parter (my personal favorite) While Tyler is no saint and he’s by no means using this album to right his wrongs, he is showing he’s learned from his mistakes.

This band’s name is almost too on the nose but that’s the psychotic perfection of Priests. They hail from DC which is very close to Baltimore which is the catholic epicenter of the United States. Nothing Feels Natural is also freakishly on point with how counter-Coulter or non-mainstream media is feeling this year with he-who-shall-not-be-named as president. NFN is at its heart a punk album but they did a fantastic job of weaving in indie, surf rock, and even jazz while front woman Greer croons, cries, and bellows to the crowd. This could be the anthem of the year for those feeling a little more than discontent with the current political climate.

These chitown boys did something very rare. They made a sophomore album that surpassed their debut one. Offers is the end result of them touring behind their debut and learning who they are as an actual band. They rely more on lyrics and thoughtful riffs. Offers itself is definitely a coming-of-age album for NE-HI. Balla said he wanted the record to be “something of an act of solidarity with people who are trying to figure it all out. There was a lot of pressure and exhaustion and self-discovery in the process of writing and recording. We were trying to find our voice and we’re proud of the one we found.” I think listeners will definitely hear this in the lyrics of tracks like “Stay Young”, “Offers”, and “Out of Reach”. While NE-Hi is trying something new lyrically, they stay true to their rattling, jangling guitars. Their psycho surf influence is still prevalent on tracks “Buried on the Moon” and “Every Dent”. Songs like “Prove” pep things up a bit, but we still have Mikey’s and Jason’s long, lingering vocals to draw us in.

Some believe we’ve been following Homeshake on his journey of love since the beginning. In The Shower and Midnight Snack were about him lusting after and eventually “getting the girl.” All relationships experience lulls – and perhaps with the miscommunication vibe happening on Fresh Air, we’re witnessing the first lull of this relationship. The title could also be referring to that first gulp of fresh air once the honeymoon cloud of sex and snuggling has cleared and things become more real. The third album for Sagar put him on my list because it’s deeper than his last two while serving up some of the best singles he’s created with tracks “Every Single Thing,”“Call Me Up,” and “Khmlwugh.” Sagar’s third album is an easy listen. Perfect for coffee shops, house parties, or even a booty call.

This album has a crazy evolution. It starts out this typical, indie folk singer-songwriter type of thing and then morphs into something… that’s a little beyond words. The metamorphosis starts with the track “Horse” and then just propels on this trajectory through what I can only imagine are the chasms of Alex G’s mind. Through dark wave, to almost rap, to autotune, synth pop, and light punk . Then “Judg” happens and were back to why people have been comparing Alex G to Elliott Smith. There’s also some borderline country/alt-country happening with the track “Powerful Man.” The reason why this made it onto my list is that fact that I haven’t figured it out yet, I keep going back to it, keep trying to figure out it’s narrative, if it even has one.

Although this album is only eight tracks long is does an incredible job of encompassing a lot of big ideas, ideas somewhat but not entirely unknown to the indie rock genre. Ideas of communities and safe spaces are a big part of Tamko’s lyrics. In songs like “Cleaning House” and “The Embers” this is made apparent. Tamko’s incorporation of pedals and synths is truly beautiful and paints some sort of ethereal landscape. Especially on tracks like Mal a L’aise. This album made my list because of the overall triumphant air it puts out.

Julie Byrne – Not Even Happiness

Byrne could be my generation’s answer to Joni Mitchell, not to say Miss Mitchell isn’t still relevant. But Byrne reminds me of Mitchell in the sense that here’s a woman with a haunting voice and captivating songwriting that punctures your hearts and lungs while trying to sing along. In her opener, she sings “To me, this city’s hell/ But I know you call it home/ I was made for the green/ Made to be alone”. This album came out two days before I moved from Chicago to Portland. Byrne is a traveler and a singular one at that. While Byrne IS writing love songs she also sings of herself. And while her lyrics are deep, her music is simple but not in a lacking way, in a way where it speaks for itself. It’s not all folky finger picking either. The track “I Live Now As A Singer” nods to herself and her generation and brings in some synthesized instrumentals.

Just how Kate Bush’s Hounds of Love makes you want to run down hallways barefoot in a ballgown, Mike Hadreas’ No Shape does the same thing. It’s ravenous and undulating. There are actually quite a few similarities between the two albums. I think Hadreas might be paying homage to miss Bush. The video for “Slip Away” is almost a combination of the videos Bush shot for the title track on Hounds of Love and Running Up That Hill. The song Wreath even borrows a few lyrics from Bush. No Shape is a triumph because it allows the listeners (if they’ll let themselves) to throw away any shackles they’ve put on themselves. No Shape is also a proclamation of love and while Hadreas is happy to succumb to it, it can be overwhelming. It’s a beautiful album that rushes through the listeners like an irregular cold wind during a heat wave. You’re left appreciative but grasping for more.