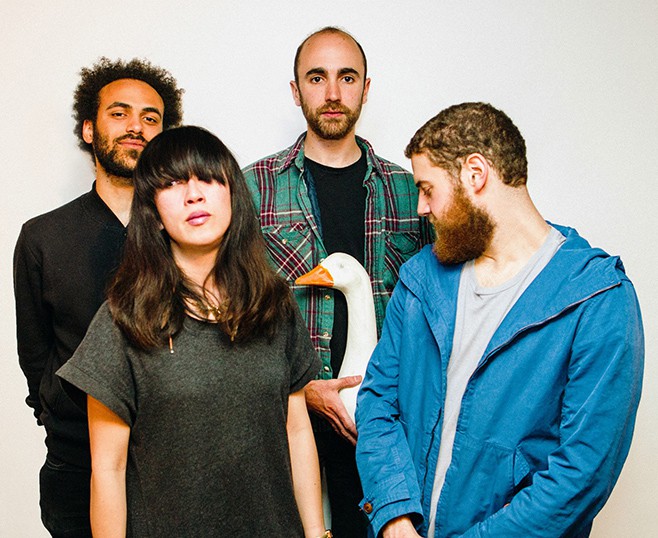 Last Wednesday I was at The Empty Bottle to catch Yuck for their Stranger Things tour. The venue is a well loved staple in Chicago and even though it’s a little rough, it never has to justify itself. Unfortunately for Yuck, that hasn’t been the case lately.

The British band has spent a lot of time defending their sound and their somewhat new lineup. Many publications and fans have given them guff for either sounding too much like certain 90s bands or not enough like themselves. I think something that is being over looked is the fact that when they debuted in 2011, they were somewhat at the front of the 90s resurgence. They don’t get enough credit for that. Also their front man quit and they kept going, most bands (especially after their first album) would have thrown in the towel. They are soldiering on and making the music they want to. I think too many fans expect groundbreaking, rerouted work every time. For Stranger Things they went to their roots and produced this album themselves. Max Bloom has stated in interviews that they just want to make music they like and have a good time playing it. I personally think that Stranger Things has some great tracks like the closer, “Yr Face”, “I’m OK”, and “Cannonball” (which is what they opened with on Wednesday). The album itself is about what front man Max Bloom went through personally since the last album and what they have learned about themselves a band.

Wednesday’s set was a relaxed vibe. They opened with “Cannonball” as I mentioned earlier and after few songs Max asked everyone how they were doing; bassist Mariko Doi was wearing pajamas. It is very apparent that Yuck does not care what you think of them. In an era where so much of music is about how you look and what you represent, it’s a breath of fresh air to see a band with a more nonchalant manner. Now, I’m not saying they are completely apathetic about their music, they wouldn’t make it otherwise, but it is nice to know that they aren’t going to waste their time getting into Twitter fights. They are just here to play music. They played “Holing Out” and “Get Away”, which are from their first album. This shows a lack of fear, they know they are going to be compared to their former selves and they don’t care. Their second to last song was “I’m OK“. This was very fitting. As a band they are going to be fine, they aren’t falling apart from the crappy reviews and they are going to keep on playing the music they want to play regardless of what you or I think. I was glad I got to see Yuck in this phase of their musical career and I’ll continue to support them. Here’s to the next phase kiddos.